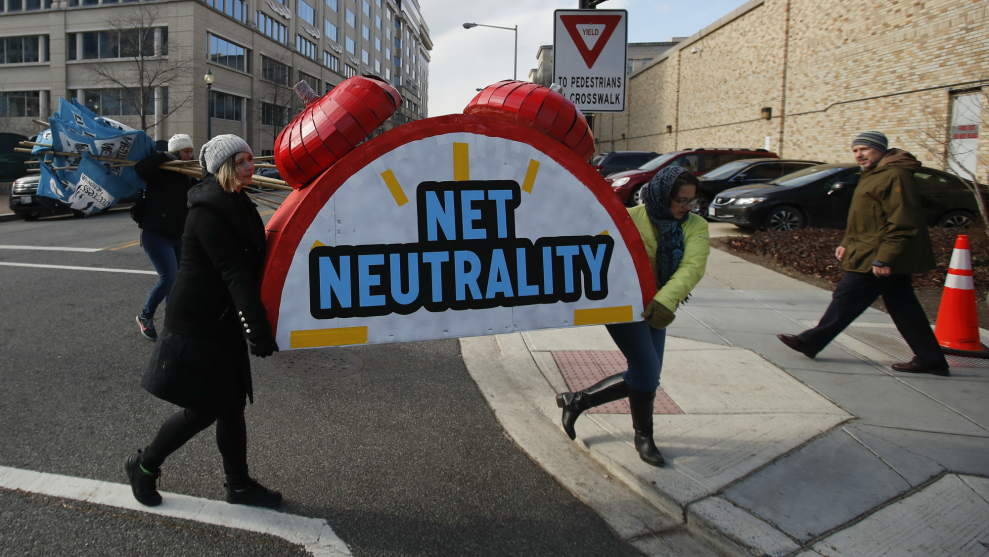 The governor of Montana took a major step forward in the fight for a free and open internet on Monday, signing an executive order requiring internet service providers to abide by net neutrality rules if they want to contract with the state government. Though several states have proposed legislation to preserve net neutrality, the decision by Democratic Gov. Steve Bullock marks the first time a state has actually put a proposal into action.

“When the FCC repealed its net neutrality rules, it said consumers should choose,” Bullock said in a press release. “The State of Montana is one of the biggest consumers of internet services in our state. Today we’re making our choice clear: we want net neutrality.”

Bullock’s executive order stipulates that in order to receive any contract from the state government, an internet service provider must not engage in paid prioritization, block or impair access to online content, or unreasonably interfere with a user’s ability to select and access broadband internet service. The rules will go into effect for any company hoping to receive a contract with the state after July 1. As the New York Times notes, the order will affect several major providers, including Charter, CenturyLink, AT&T, and Verizon.

Ernesto Falcon, a legislative counsel at the Electronic Frontier Foundation, a nonprofit that advocates for digital rights, welcomed Bullock’s measure. Because a state government often represents a significant portion of business for internet service providers, government contracts are where a state can have the “most leverage” over a provider while respecting its legal limitations, says Falcon. Other states have had a similar thought; a measure focused on state contracts was proposed in the New York legislature earlier in December, but it has not yet been voted on. Washington Gov. Jay Inslee proposed ahead of the FCC vote that he would ensure state providers met net neutrality principles, though the proposal hasn’t been made formal. In the press release accompanying the executive order, Bullock also called on other states to implement similar policies, offering to personally email the framework to other governors and legislators. “This is a simple step states can take to preserve and protect net neutrality. We can’t wait for folks in Washington DC to come to their senses and reinstate these rules,” the statement reads.

Not all states can simply issue an executive order, though. Whether other governors actually follow suit will depend on how much authority they have, notes Falcon, as some governors must work with their state legislatures or their public utilities commissions before they can implement such policies. But, “every other governor that has the [same] amount of authority, they’re probably looking at it right now,” Falcon says.

Montana’s executive order will almost certainly face a legal challenge. In its repeal of net neutrality rules last month, the Federal Communications Commission included a preemption clause that gives it authority to block states from creating their own net neutrality laws. “I would expect that no matter how narrow, or careful a state issues a decision, internet service providers will sue,” says Falcon.

According to the Times, several trade groups said they were monitoring Bullock’s order and were considering lawsuits. “Following patchwork of legislation or regulation is costly and makes it even harder to invest in networks,” Matt Polka, president of the American Cable Association, told the Times.

The FCC has yet to comment on the executive order.

Beyond New York, Washington, and Montana, a number of other state officials and lawmakers across the country, in both red and blue states, have vowed to fight the decision. And last week, 21 state attorneys general and the District of Columbia sued the FCC in an attempt to block the repeal. Meanwhile, earlier this month in Washington, 50 senators signed on to a resolution proposing to overturn the FCC’s decision, gaining the necessary support to force a vote. However, a similar resolution would need to pass the House, and eventually be signed off by the president—a very unlikely prospect.