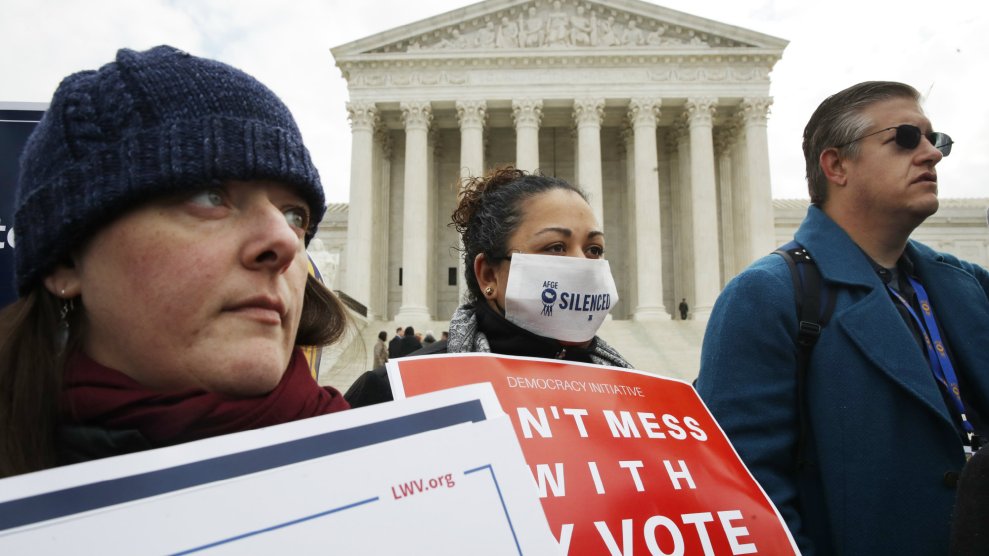 The Supreme Court may be poised to green-light a controversial Ohio program that removes infrequent voters from the state’s registration lists. During oral arguments Wednesday morning, several justices seemed more concerned with preserving the state’s ability to remove people who had moved or died than they were with protecting eligible voters from being purged from the voter rolls.

The high-stakes legal fight surrounding Ohio’s voter purge program is at the center of a larger battle over access to the ballot. If the court allows Ohio to continue to remove voters based in part on their past failure to cast a ballot, other states will likely follow suit and millions of Americans across the country could find themselves disenfranchised because they have not recently voted. Supporters of the Ohio policy say it’s necessary to prevent voter fraud, but voting rights groups counter that such fraud is exceedingly rare and that the state’s voter purges are both error-prone and unfair, because they punish citizens who choose to exercise a constitutional right not to vote. There is also substantial evidence that the state purges minority voters and those from Democratic-leaning neighborhoods at disproportionately high rates.

“You think there is a constitutional right not to vote?” asked Roberts.

But the court’s conservative justices did not appear worried about the program’s fairness or the rights of voters who choose not to cast a ballot. “You think there is a constitutional right not to vote?” Chief Justice John Roberts skeptically asked Paul Smith, the counsel for the plaintiffs opposing Ohio’s policy. Conservative Justice Samuel Alito seemed to endorse the idea that non-voting could be a way to identify people who have moved or passed away. He posited the idea of a policy that targets voters for removal if they had not voted in 20 years, as opposed to Ohio’s practice of going after voters who have sat out the process for two years, as a case in which failure to vote might be a tool to suss out ineligible voters. “Isn’t that enough even to spark an inquiry?” he asked.

Under Ohio’s current process, the state mails a confirmation notice to voters who have not cast a ballot in the previous two years. The notice asks that voters confirm their registration by responding to the notice, changing their registration online, or voting in the next four years. If they fail to take any of these actions, then the state removes them from the rolls. Hundreds of thousands of voters have been removed under the policy, despite the fact that many of them would otherwise be eligible to vote. The question before the court is whether this process violates a federal law, the National Voter Registration Act (NVRA) of 1993, that prohibits states from canceling a voter’s registration “by reason of the person’s failure to vote”

Justice Stephen Breyer, who usually sides with the liberal justices, seemed notably skeptical of the plaintiffs’ arguments that Ohio’s program runs afoul federal law; he asked Smith a number of pointed questions. Breyer remarked that “dead people” on the voter rolls “used to be a big problem” and said, “I don’t believe Congress would have passed a statute that would prevent a state from purging a voting roll of people who have died or have moved out of the state.”

Justice Anthony Kennedy, the court’s frequent swing vote, also suggested Ohio was justified in removing voters in order to keep the rolls accurate. “The reason they’re purging them is they want to protect the voter roll from people that have moved, and they’re voting in the wrong district,” he said. “What we’re talking about are the best tools to implement that reason.” Overall, though, Kennedy was relatively quiet during the arguments, leaving his position unclear.

Breyer asked Smith whether he had “hard” evidence to support his position that Ohio’s process for removing non-voters was overly broad and violated the NVRA. Smith said that of the 1.5 million notices Ohio sent to voters who missed an election, 1.2 million were ignored and not mailed back.

“Can we get to the essence of this case?” she said to Ohio Solicitor General Eric Murphy, who argued for the state. “Your reading [of the NVRA] is that failure to vote is enough evidence to suggest someone has moved.” But, she continued to prod, is that a “reasonable effort” since the process results in disproportionately disenfranchising minority voters?

“All of these impediments result in large numbers of people not voting in certain spots in the state,” Sotomayor noted.

Ohio has purged 2 million voters since 2011; 840,000 of those purges have resulted from infrequent voting. According to a Reuters analysis, Ohio has purged at least 144,000 voters in the state’s three largest counties—home to Cleveland, Columbus, and Cincinnati—since the 2012 election, with voters in Democratic-leaning neighborhoods twice as likely to be removed as those in Republican-leaning ones. Sotomayor also pointed to other restrictions on voting in Ohio, such as the elimination of the first week of early voting, when African Americans were five times likelier than whites to cast a ballot, and long lines at the polls in cities such as Cleveland in past elections. “All of these impediments result in large numbers of people not voting in certain spots in the state,” Sotomayor noted.

“What is the evidence you have that people struck from the rolls have actually moved?” Sotomayor asked.

Sotomayor also sharply questioned the Trump administration’s decision to reverse the Obama Justice Department’s opposition to Ohio’s program. She noted that in the past, both Republican and Democratic administrations had interpreted the NVRA as prohibiting the use of non-voting as a reason to remove people from the rolls. “There’s a 24-year history of solicitor generals under both parties taking positions contrary to yours,” she told Solicitor General Noel Francisco, who argued for the US government. “It’s quite unusual your office would change its position so dramatically.”

Francisco said there was a “public context” of confusion about how to interpret this part of the NVRA and that the administration interpreted the Help America Vote Act of 2002 as clearing up that ambiguity in favor of Ohio’s policy.

“Do you believe this doesn’t have a disproportionate impact on certain groups in society?” Sotomayor asked.

The NVRA “gives states flexibility” to remove voters from the rolls, Francisco responded.

The larger significance of the case is that the NVRA—which not only limits how states can purge their voter lists but also requires states to allow people to register to vote at DMV offices and social service agencies—has a political target on its back. Republicans who seek to impose more hurdles to registration and voting in the name of fighting voter fraud, despite overwhelming evidence that fraud is extremely rare, likely need to weaken the NVRA in order to achieve their goals. “We’re seeing a coming fight over how voter rolls are maintained,” Dale Ho, director of the ACLU’s Voting Rights Project, told Mother Jones last week. “It’s a new front in the voter suppression battles.”

The Supreme Court case Wednesday is part of that struggle. Legally, the case hinges on how the nine justices interpret the phrase “by reason of a person’s failure to vote.” But the bigger picture is about a political movement agitating for aggressive purging of voter rolls across the country.

Near the end of his argument, Smith said that Ohio’s current program is similar to purges that predate the NVRA. With Ohio’s process, he said, “you end up with a system which looks an awful lot like the old Ohio ‘use it or lose-it’ system.”