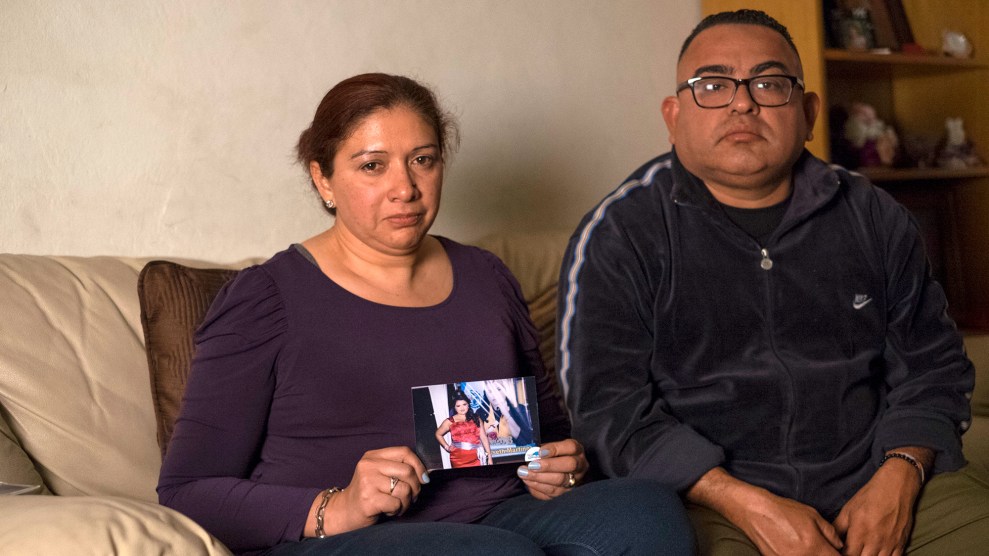 Silvia and Jorge with a photograph of their daughter, BanyErin Stone

Jorge last saw his daughter Bany in 1998, when he left El Salvador to find work in the United States. His wife Silvia followed him a few years later, leaving Bany with Jorge’s parents until they could afford to bring her to their new home in Northern California. “The cost of coyotes started to get more and more expensive and we started hearing of cases of girls getting raped or killed,” Jorge recalled. “We just didn’t want to risk it.” Bany was one when he left; she is now 21 years old. “I haven’t spent a Father’s Day with her, or even a single Christmas together,” he said. “I have never felt a hug from her.”

Last year, after years of separation, the family was on the verge of reuniting. A program put in place by the Obama administration allowed young people from El Salvador, Honduras, and Guatemala to seek asylum if they had a parent with legal immigration status in the U.S. Bany had been approved to fly from El Salvador to rejoin with her parents at the end of August. Then, days before her scheduled arrival, Jorge got a call from his lawyer. He remembers his hand shaking as he held his phone to his ear and listened in disbelief: The Trump administration was ending the Central American Minors (CAM) program. Bany would not be coming.

For a few hours after he hung up the phone, Jorge kept the news to himself. He worried about telling his wife, whose health had worsened in part due to the stress of being separated from their daughter. Late in the afternoon, Jorge pulled into the driveway of the home that he, Silvia, and their two youngest children share with his brother-in-law’s family in San Carlos, California. When her husband told her the news, Silvia felt her chest tighten and she collapsed in an epileptic seizure.

In 2014, a surge of more than 60,000 young Central Americans crossed into the United States, most traveling without their parents as they fled gang violence in their countries. In response, the Obama administration launched the CAM  program to provide an alternative to the perilous journey across Central America and Mexico that many children faced.

The CAM program created two avenues for “unaccompanied minors” still in their home countries to enter the United States legally: They could apply for refugee status, and if they didn’t qualify, they could be considered for “parole” status, which granted selected minors a two-year period of asylum if they had a parent who was legally in the country. Since 2014, about 1,700 children and teenagers, mostly from El Salvador, have rejoined their families in the United States as refugees, and nearly 1,500 as parolees.

“This could have been done in numerous ways, but it was changed in the cruelest way.”

The Trump administration’s announcement in August shut down the parole program. In October, the White House shut down the refugee program as well, ending CAM entirely. The State Department stopped accepting all new CAM applications after November 9. By the end of January, however, all pending cases will be closed, according to a State Department official.

That seems unlikely, as the vetting process is notoriously slow. Cecilia Linares, who lives in Concord, California, had already bought a plane ticket for her daughter Jaisy to join her from El Salvador when she heard CAM had been shut down. Jaisy had recently been approved for CAM’s parole program after a nearly three-year application process that included a comprehensive medical exam and a DNA test. She had a baby, so the process took longer than it did for most applicants, though it was common for applications to take between 13 months and two years.

Linares emigrated from El Salvador nearly 20 years ago. Her husband had abandoned her, and she was left to care for their three young children and her elderly father by herself. Her son was seven, and her two daughters were five and four when Linares left her home in a small town near the Guatemalan border. Leaving her children, she said, was the most difficult thing she’d ever had to do. She would not see them for another 17 years, when she returned to El Salvador to visit her dying father. Jaisy, her youngest daughter, was the only one of her kids who qualified for CAM. (To be eligible, applicants had to be under 21 and unmarried.)

Linares’ voice shakes as she describes the day she heard that CAM was ending. She seems unable to bring herself to say Donald Trump’s name, referring to him as “the guy.” “I was thinking, probably [Jaisy] is able to come because the guy can cancel the new applications, but not the ones who are ready to come,” Linares recalled as she sits in her living room. “But [the lawyer] told me no, it is canceled, everything. Then that’s when I cried a lot and I say, ‘It’s not possible, I’ve been waiting too long for this.’”

She pauses, wiping her eyes. “This guy, you know, I think he doesn’t have a heart. It is not just one person, it’s thousands of people who only want to be together.”

“It is not just one person, it’s thousands of people who only want to be together.”

The program’s cancellation not only shut down new applications and pending cases, but also blocked young people like Bany and Jaisy, who had already been approved to come to the U.S. “This could have been done in numerous ways, but it was changed in the cruelest way,” said Lisa Frydman, an immigration attorney and the vice president of Kids in Need of Defense, a nonprofit that represents unaccompanied minors in deportation proceedings. The more than 2,700 children and teens who were granted parole status but had not yet traveled to the United States may file appeals with U.S. Customs and Immigration Services, though it seems unlikely that they will be approved.

“There have been other refugee programs the U.S. has ended, but there’s never been this sort of abrupt shut-down,” Frydman said. “There seems to really be an effort to cut off access to children and families from Central America needing protection.”

Despite the hope it offered, the CAM program was criticized for being too slow and too small to adequately address the larger problem it was designed to tackle. At the start of the program, of the thousands of children who applied, fewer than 100 were approved. Advocates worried that restricting CAM eligibility to children with at least one parent legally in the United States excluded many kids who were also in danger. Additionally, proving persecution based on race, religion, social group, or nationality—a requirement for receiving refugee status—is difficult, particularly for unaccompanied children.

Frydman predicts that many young people who had been approved to immigrate under CAM will now come on their own. “There’s a lack of a safe and authorized way to get to the U.S.,” she said. “[CAM] provided that. It did not meet the need for all those with potential claims for international protection, but it did an important piece in creating an avenue for those who could qualify.” KIND and other immigration advocates have pushed to get the remaining pending refugee cases approved. “I think there’s no hope for the parole cases,” Frydman said. The USCIS website states that applicants whose interviews are not completed by January 31 will receive “a notice with further instructions.”

On a recent afternoon, Linares spoke with Jaisy over WhatsApp, as they do every day. Jaisy told her mom that she and her friend are hoping to start a pizza-making business and were running into town to get supplies. Then Jaisy mentioned that some of her friends were in the hospital after being attacked for selling goods in a gang-controlled neighborhood. Linares shells out hundreds of dollars a month to pay for private cars to shuttle Jaisy around because it’s too dangerous for her to walk. There have been multiple murders in Jaisy’s neighborhood. She often wakes in the middle of the night to the sound of police sirens.

At times, Linares’ eyes filled with tears, and then her face would light up with joy as she listened to her daughter’s voice. Linares told Jaisy stories about when she was a toddler—Jaisy likes to be reminded of when she was young, when her mother was still with her. She said she remembers when Linares sang to her when she was two or three years old. Their goodbye was light and quick—they’re used to goodbyes.

Linares said she is happy because her son has joined her . “But it is like a puzzle. I have two more pieces to be complete. It is a long time to be praying every night and every morning to be with my three kids. But this is where we are now.” Sometimes she dreams that her lawyer has called and said she can pick up Jaisy at the airport. Linares goes and Jaisy is there—finally. Those mornings, she wakes up crying.