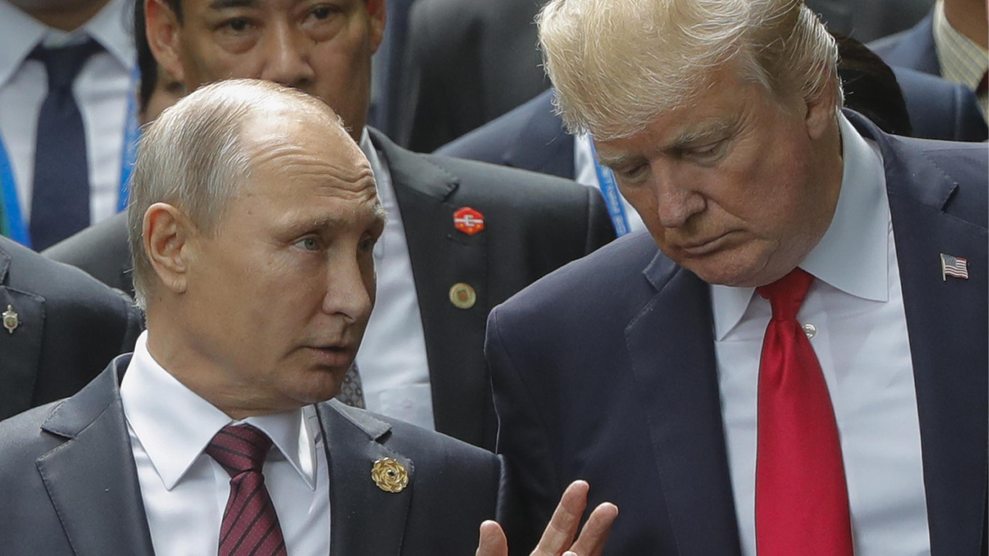 On Monday, the Trump White House faced two key deadlines in connection with the new Russian sanctions law that the president grudgingly signed last August. The measure required the administration to impose new penalties on Russia’s defense and intelligence sectors and to draft a “black list” of Putin-linked Russian oligarchs. The deadlines were seen as a test of the administration’s willingness to get tough with Russia over its meddling in the 2016 election. The Trump team appears to have failed that test: No new sanctions were levied. Meanwhile, the “black list” that was compiled by the Treasury Department was reportedly cribbed partly from Forbes magazine’s annual rankings of billionaires.

Trump’s lack of follow-through on the sanctions law has angered congressional Democrats, who accuse the president of failing to stand up to Russia over its intervention in the presidential race. “The Trump Administration had a decision to make whether they would follow the law and crack down on those responsible for attacking American democracy in 2016,” Rep. Eliot Engel (D-N.Y.), the top Democrat on the House Foreign Affairs Committee, said in a statement. “They chose instead to let Russia off the hook yet again. I’m fed up waiting for this Administration to protect our country and our elections.”

Sen. Ben Cardin (D-Md.), the ranking member on the Senate Foreign Relations Committee, told Mother Jones, “We’ve got to be pretty tough about this. But with the president not imposing any sanctions, that’s hard to understand.”

On Tuesday afternoon, Senate Minority Leader Chuck Schumer (D-N.Y.) questioned Trump’s motivation for blowing the sanctions deadline, pointing out that that the Trump administration had this week allowed Sergey Naryshkin, the head of Russia’s foreign intelligence service, who is currently under sanctions, to visit the United States.

“We sanctioned the head of their intelligence and then the Trump administration invites him to waltz through our front door,” Schumer said. “This is an extreme dereliction of duty by President Trump, who seems more intent on undermining the rule of law in this country than standing up to Putin.”

The sanctions legislation signed by Trump in August, approved almost unanimously by Congress the previous month, required that the administration devise sanctions targeting companies and individuals that do business with Russia’s defense and intelligence sectors. The law set the first deadline in this process for last fall, requiring the administration to compile a list of relevant entities and individuals that might merit sanctions. The administration blew this first deadline, issuing it almost a month late—and only after public scolding from lawmakers.

On Monday, after fumbling the second part of this process—implementing the sanctions—the State Department claimed that the mere threat of sanctions included in the law has been a sufficient deterrent, rendering moot the need to impose new sanctions.

“Today, we have informed Congress that this legislation and its implementation are deterring Russian defense sales,” State Department spokeswoman Heather Nauert said in a statement.

The sanctions law also required the Treasury Department by Monday to send Congress a report identifying the most influential Russian oligarchs, measuring their closeness to Putin and their net worth. The report carried no legal consequence but was seen as a harbinger of future sanctions among Russia’s business elite, who for months sought to stay off the list by trying to schedule meetings across Washington.

The Treasury Department met this deadline on Monday, releasing a list of 96 Russian oligarchs and 114 senior political figures about 15 minutes before midnight. But on Tuesday, a department spokesperson confirmed that the list was assembled after consulting Forbes‘ annual billionaires rankings. Russia has 96 billionaires on the Forbes list, and those are the 96 oligarchs listed in the Treasury report.

“That’s disappointing,” Cardin told Mother Jones. “That’s not the way it should have been done. It looked like a cut and paste.”

Cardin noted that the Trump administration is defying the sanctions law in other ways. For instance, the measure requires the administration to impose sanctions on Russian entities and individuals “undermining cybersecurity.” The senator said the administration has yet to do this, despite warnings from CIA Director Mike Pompeo that Russia will target the 2018 midterm elections.

Cardin told Mother Jones he still hopes the Trump administration will send a “clear message” that Russia’s interference is unacceptable. In the meantime, he said, Trump telegraphs weakness. “You can’t be soft on Russia,” he said, “because they’ll take you to the edge and beyond the edge, and right now the message is that there’s been very little penalty paid for what they’ve done.”