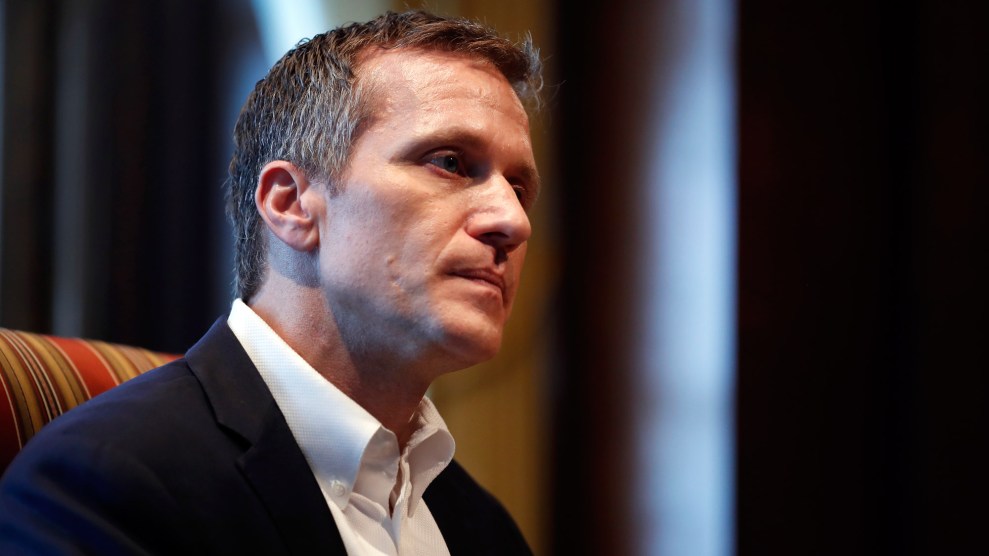 Update 7:35 p.m. ET: Missouri Gov. Eric Greitens said in a statement to the St. Louis Post-Dispatch on Thursday night that he made “personal mistake” before his tenure as governor but insisted he “did not commit a crime.” Calling the St. Louis grand jury’s indictment a “disappointing and misguided political decision,” he added that Missouri residents “deserve better than a reckless liberal prosecutor who uses her office to score political points”—a reference to St. Louis Circuit Attorney Kim Gardner, who launched a probe into allegations against Greitens last month. Greitens’ attorney Edward L. Dowd Jr. called the allegations against the Republican governor “baseless and unfounded” in a statement to the Post-Dispatch. He said that the Republican governor was “absolutely innocent.”

On Thursday night, a St. Louis grand jury indicted Missouri Governor Eric Greitens for felony invasion of privacy. The indictment comes just a month after allegations arose that in 2015, Greitens had allegedly threatened to release a nude photograph of a woman he had an extramarital affair if she went public with their relationship.

The indictment claims that Greitens “knowingly photographed” a woman identified by her initials “in a state of full or partial nudity without the knowledge and consent” and “in a place where a person would have a reasonable expectation of privacy,” according to CBS-affiliate KMOV. Greitens “subsequently transmitted the image contained in the photograph in a manner that allowed access to that image via a computer,” according to the indictment.

On January 10, Greitens, a onetime Democrat who joined the GOP in 2015 and has long been seen as a rising star in the Republican Party, acknowledged that before he became governor, he had had an affair. In a statement with his wife, he noted that “there was a time when he was unfaithful” and that it was “a deeply personal mistake.” Greitens became Missouri’s governor in 2016.

Just this morning, before the indictment was made public, the Republican Governors Association lauded Greitens for proposing to cut taxes in Missouri, tweeting that through his tax reform package the governor is “focused on returning money to the pockets of taxpayers—not government.”