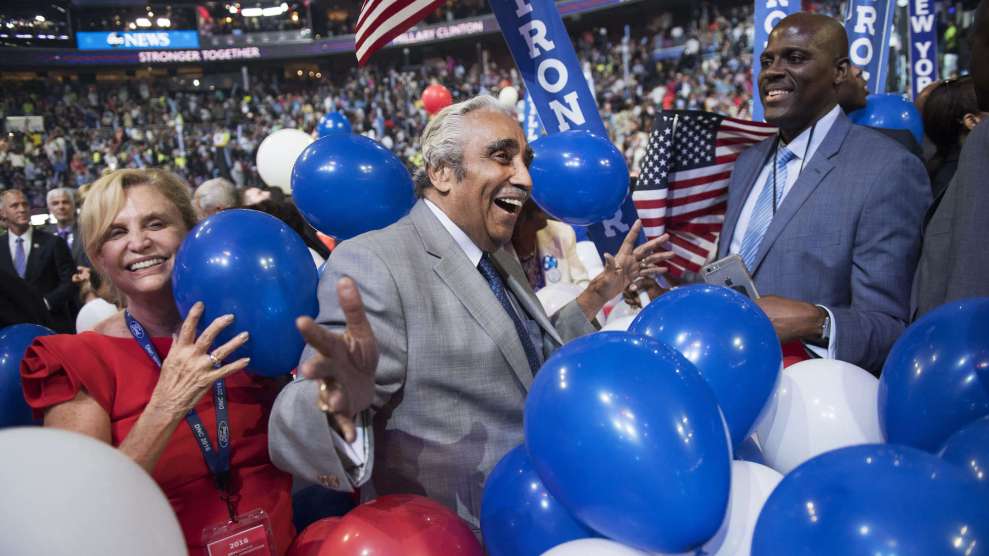 Democrats are hoping to have something to celebrate in November, like Reps. Charlie Rangel and Carolyn Maloney of New York did at the 2016 Democratic National Convention.Tom Williams/ZUMA

On Tuesday night, Democrats celebrated another victory in what they see as a steady march to a wave election in November that could give them control of Congress. Margaret Good’s win over Republican James Buchanan in a special election in southwest Florida marks the 36th statehouse seat to flip from red to blue since Donald Trump took office. Coming on the heels of a statehouse win last week in a deep-red Missouri district, Democrats have heralded the latest victory as evidence that they are continuing to gain momentum ahead of the congressional midterms.

But the takeaway from Tuesday night was not that simple. The Florida seat was only one of three GOP posts up for grabs. In each of the other two special elections, Republicans maintained control. (Those races followed two Minnesota special elections on Monday for statehouse seats vacated by legislators who resigned amid allegations of sexual misconduct; the incumbents—one Democrat and one Republican—won in both.) And Democrats’ margin in the congressional generic ballot polling average—where they will likely need at least a seven-point advantage to overcome structural handicaps and win the House of Representatives—continues to narrow. Let’s look at what Tuesday night’s results mean for Democrats’ hopes of a “blue wave” in November.

The Democrats’ big win this week came from Florida’s 27th House District, where Good beat Buchanan by a 7-point margin. In 2016, Trump won the district by 5 points. But that swing is still substantially smaller than Democrats have managed in other recent special elections—last week’s special elections in Missouri, for example, saw a 31-point swing left—putting a dent in their hopes of making massive gains this year. Still, Democratic prospects do appear to be improving in the swing state of Florida, where Trump beat Hillary Clinton by just 1.2 percentage points and where Democrats have recently won the St. Petersburg mayoral race and a Miami-area state Senate special election.

The state House seat for District 175, a southern district at the Florida border, stayed red in a special election to replace a legislator who resigned to take a job with the Technical College System of Georgia. Republican John LaHood beat two fellow Republicans and a Democrat with 70 percent of the vote. The GOP victory follows two January 9 special elections in the state, in which state House and Senate seats remained in Republican hands.

The three Republican candidates, who captured 76 percent of all votes, fared better in this race than they did in 2016, when Trump received just under 60 percent of the vote in the three counties that participated in yesterday’s election. The open election format and low voter turnout—fewer than 10 percent of registered voters cast ballots, compared with more than 70 percent in the 2016 presidential election—may limit the usefulness of this race as a bellwether for things to come.

On the surface, Republican Casey Murdock’s victory over Democrat Amber Jensen in the state’s 27th Senate district—another seat vacated amid sexual misconduct allegations—seems like a predictable victory in Trump country. Murdock won with 68 percent of the vote. But that margin obscures a shift: Trump won this district with 84 percent of the vote in 2016, meaning Murdock’s victory represents a 16-point shift toward the Democrats. (Low turnout, however, may have contributed: Just 23 percent of voters showed up.) Democrats will soon have another shot at an open seat. Murdock, who served as a member of the Oklahoma House, creates another vacancy with his elevation to the Senate that will have to be filled by a special election.

The coming week presents three more special elections for state legislature seats previously held by Republicans. On Saturday, Louisianans will vote to replace Republican Chris Broadwater, and next Tuesday, February 20, elections in Kentucky and Mississippi will replace two more state legislators who left office amid sexual assault allegations. These seats, located in squarely in deep red districts, are expected to stay under Republican control, though as with the Oklahoma race, Democrats will look for narrowing margins between the parties.

The following Tuesday, February 27, offers more promising opportunities for Democrats. GOP legislature posts in Connecticut and New Hampshire—two reliably blue states—will be up for grabs. Four seats in New Hampshire’s House of Representatives flipped from Republican to Democratic control in 2017.