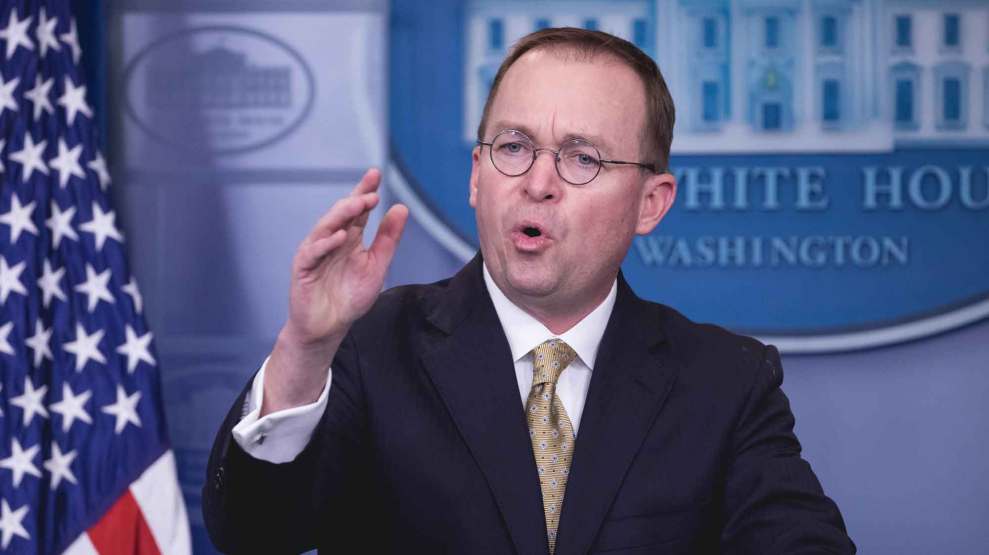 Since President Trump named him interim director of the Consumer Financial Protection Bureau in November, White House budget director Mick Mulvaney has made one move after another to weaken the financial watchdog he has long disliked: he’s shelved investigations and announced plans to gut regulation of predatory lenders, review all of the agency’s operations, and spend down its emergency funds.

Now he’s added another controversial move to the list: stripping enforcement powers from the Office of Fair Lending and Equal Opportunity, the CFPB department responsible for protecting minority borrowers from discriminatory lending. This office has won some of the CFPB’s biggest victories, levying hundreds of millions in fines against lenders who overcharged nonwhite borrowers for car loans and mortgages.

Among the Office of Fair Lending’s many victories was a $169 million fine levied against GE Capital in 2014—the largest credit card discrimination settlement in the federal government’s history.

This latest decision—first reported by the Intercept—has alarmed consumer advocates. “These changes to the Office of Fair Lending and Equal Opportunity send a troubling message about the enforcement of civil rights laws and will harm people—especially in communities of color—who are wronged by payday lenders, debt collectors, or auto dealers,” Vanita Gupta, president and CEO of The Leadership Conference on Civil and Human Rights, said in a statement.

The office is not being eliminated, but being moved to a position within the CFPB where it will lack authority to supervise loan makers and enforce fair lending laws. The office will now be more directly under Mulvaney’s supervision, as part of the Office of Equal Opportunity and Fairness—a group that, until now, has functioned exclusively as an internal CFPB personnel office tasked with overseeing “diversity and inclusion.” The relocated enforcement office will now focus on “advocacy, coordination, and education,” as Mulvaney put it in an email to staff this week. The message said the office’s employees will likely be retained by the bureau, but “may experience changes in jobs and duties.”

Among the Office of Fair Lending’s many victories was a $169 million fine levied against GE Capital in 2014, the largest credit card discrimination settlement in the federal government’s history, imposed for withholding credit card offers from 108,000 customers based on their Hispanic ethnicity.

With the office’s move, fair lending compliance will now be overseen by other workers in the CFPB’s enforcement division. This consolidation has consumer advocates worried that enforcement actions against discriminatory loan makers will fall through the cracks. The changes “increase the likelihood that people will continue to face discriminatory access and pricing as they navigate their economic lives,” Lisa Donner, executive director of Americans for Financial Reform, said in a statement.