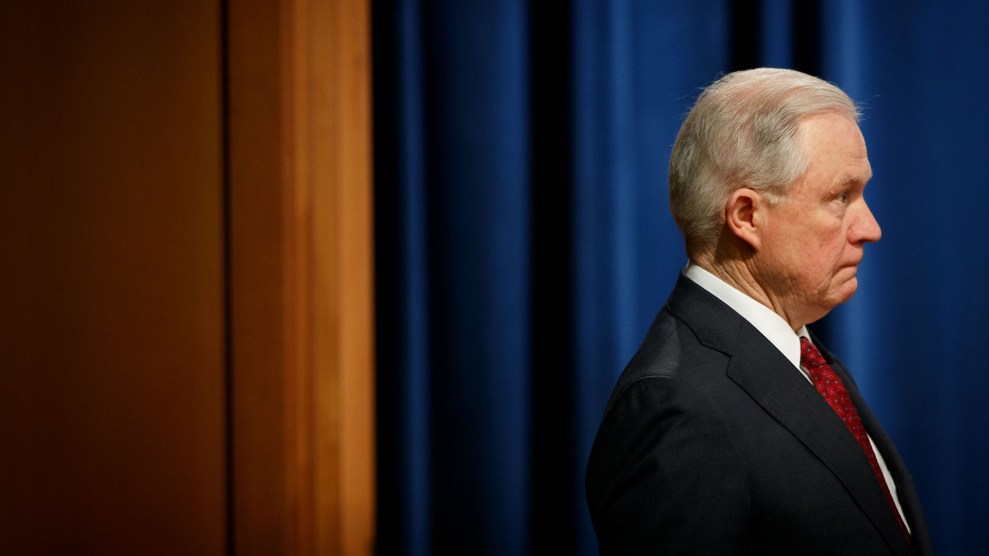 President Donald Trump upped his criticism of Jeff Sessions on Wednesday, blasting his attorney general on Twitter for not doing enough to investigate alleged FBI malfeasance. His criticism comes after Sessions announced Tuesday that the Justice Department’s inspector general would investigate Republican allegations of the abuse of secret surveillance warrants, including the one used to target former Trump campaign adviser Carter Page. The FBI has stated that its surveillance of Page was proper, and Democrats on the House Intelligence Committee released a memo last week debunking a Republican memo that is the source of the  misconduct allegations.

Why is A.G. Jeff Sessions asking the Inspector General to investigate potentially massive FISA abuse. Will take forever, has no prosecutorial power and already late with reports on Comey etc. Isn’t the I.G. an Obama guy? Why not use Justice Department lawyers? DISGRACEFUL!

The accusation of FBI wrongdoing are central to Republican attacks on Robert Mueller’s probe into Russian interference in the 2016 election. Sessions recused himself from the Russia investigation, but that hasn’t stopped him from injecting himself repeatedly into matters he vowed to stay out of. His announcement of the inspector general’s investigation not only lends credence to dubious claims of misconduct but once again puts him in the middle of matters he is supposed to be recused from.

To Trump, however, what his attorney general is doing is not enough. The president has repeatedly expressed frustration with Sessions for failing to protect him from the Russia probe, an expectation that cuts against the traditional emphasis on preserving an independent Justice Department and FBI. His Twitter outburst on Wednesday was also likely fueled by watching Fox News, which covered Sessions’ announcement of the inspector general investigation Tuesday evening and this morning on Fox and Friends.

Looks like Trump watched to the end of Fox & Friends and then started his DVRed version of Fox’s America’s Newsroom. Same time gap as the other tweets this morning.

Sessions responded to Trump’s tweet Wednesday afternoon, defending his conduct and the independence of the Justice Department.

This may be Jeff Sessions’ strongest rebuttal yet to an attack from Trump. pic.twitter.com/81JOangPHx

This post has been updated to include Sessions’ response.