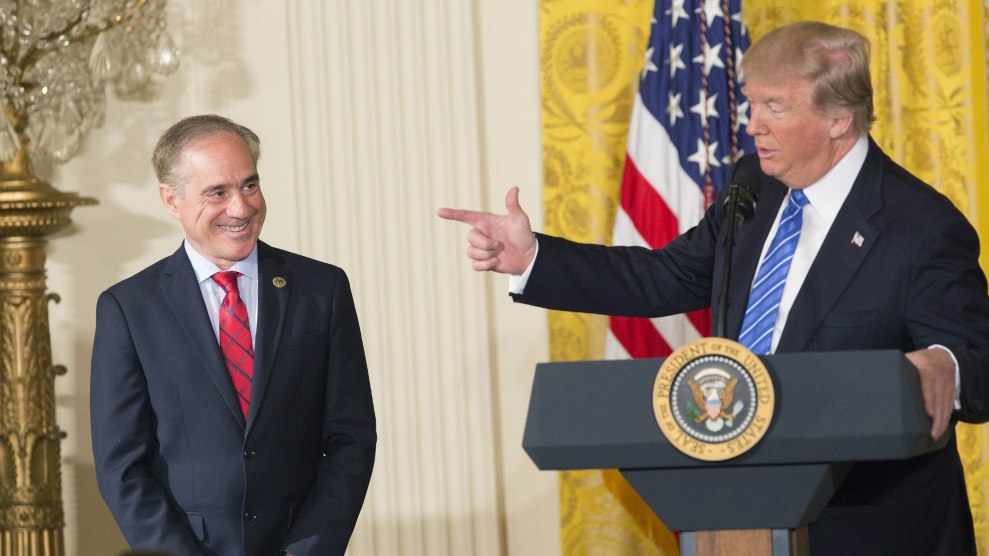 Yet another member of Donald Trump’s Cabinet is under fire for taking liberties with taxpayer-funded travel. This time it’s the secretary of the Department of Veterans Affairs, a troubled agency that Trump campaigned on improving to ensure veterans’ needs were the top priority.

The Washington Post reported Wednesday that the agency’s chief of staff doctored emails to make it look like Secretary David J. Shulkin would be receiving an award during a trip to Europe in order to justify spending taxpayer money for his wife to travel with him. Shulkin did not receive an award, but his wife did go with him on a 10-day trip to Denmark and England last July. The trip included several days of work for Shulkin, but he and his wife also spent several days as tourists. Airfare for Shulkin’s wife cost more than $4,300, and costs for the entire trip topped $122,000.

The Post originally raised questions about travel arrangements for the trip in September. Shulkin aggressively dismissed those concerns, accusing the newspaper of “poor reporting.” The agency’s inspector general launched an investigation and confirmed the concerns raised by the newspaper—and more.

Not only was there no justification for Shulkin to take his wife on the trip, the inspector general report found, but Shulkin accepted free tickets to attend the Wimbledon tennis tournament and told ethics officials at his agency that they were from a friend of his wife. When question by investigators, however, the woman who provided the tickets was unable to state Shulkin’s wife’s first name. The internal report also found that Shulkin had deputized a VA employee to work as a “travel concierge” for his wife, who proceeded to send requests for flight times and to ask that tourist stops, like high tea and a visit to the Roman baths in the town of Bath, England, be added to the itinerary.

Shulkin was a holdover from the Obama administration, where he served as an undersecretary in the VA, but his work at the VA has been highly touted by Trump. He is also the fifth Trump Cabinet member to be accused of misusing official travel privileges, following Treasury Secretary Steve Mnuchin, Interior Secretary Ryan Zinke, Environmental Protection Agency Administrator Scott Pruitt, and former Health and Human Services Secretary Tom Price, who resigned over his use of official jets for private travel.