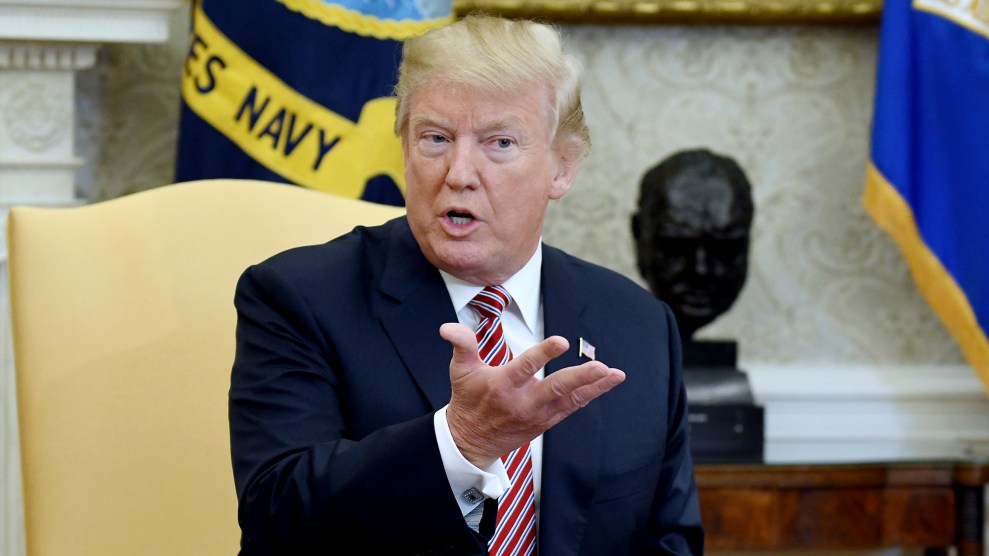 White House aides hit the Sunday news circuit to try to fix President Trump’s latest public relations nightmare: His defense of former staff secretary Rob Porter, who resigned this week amid allegations that he abused his two ex-wives. Trump and Chief of Staff John Kelly have been accused of failing to take the allegations of violence seriously and of protecting an abuser; on Saturday, Trump tweeted, “Peoples lives are being shattered and destroyed by a mere allegation. Some are true and some are false. Some are old and some are new. There is no recovery for someone falsely accused – life and career are gone. Is there no such thing any longer as Due Process?”

Aides’ attempts to explain the defensive response from Trump and Kelly only raised more questions. In an interview Sunday, Legislative Affairs Director Marc Short said that Trump’s handling of the accusations against Porter has been shaped by the fact that the president himself has faced allegations of assault from more than a dozen women.

“I think the president is shaped by a lot of false accusations against him in the past,” Short said on NBC’s Meet the Press. Short described Trump as “saddened,” “disturbed,” and “disappointed” by the Porter situation, and he said that the president believes Porter’s resignation was the right move. But Short did not respond to directly to the question of whether Trump believes Porter is innocent.

White House advisor Kellyanne Conway also mentioned Trump’s accusers Sunday in response to the question of whether Trump believes Porter is innocent. “The president believes, as he said the other day, you have to consider all sides,” Conway told ABC’s George Stephanopoulos on This Week. “He has said this in the past about incidents that relate to him as well.” Conway stressed that Porter “is no longer the staff secretary.”

Conway also responded to a Saturday tweet by Sen. Kirsten Gillibrand (D-N.Y.) that said, “If [Trump] wants due process for the over dozen sexual assault allegations against him, let’s have Congressional hearings tomorrow.” Conway suggested that media attention counts as due process: “Those accusers have had their day on your network and elsewhere for a long time. They were trotted out again late last year.”

Meanwhile, budget director Mick Mulvaney attempted to defend the handling of the Porter situation and Trump’s Saturday tweet, but the explanations were not very flattering to the White House. He said on Fox News Sunday that Trump and Kelly had a “very human reaction” to the allegations against Porter. Mulvaney is reportedly a likely candidate to become the next chief of staff if Kelly leaves the White House, but Mulvaney said Sunday that the rumors are “much ado about nothing.”

Mulvaney also defended the president’s Saturday tweet by suggesting it was a reference to casino magnate and former RNC Finance Chair Steve Wynn, who faces accusations of sexually harassing employees in his casinos for decades. Wynn, who stepped down as CEO of Wynn Resorts this week due to these allegations, is hardly a sympathetic figure.