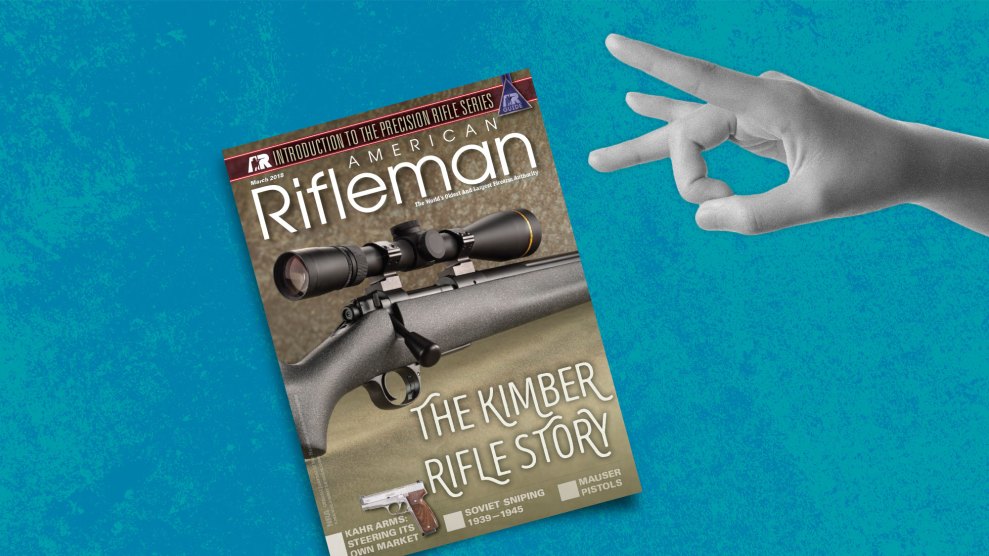 The National Rifle Association likes to boast that it represents 5 million gun owners. Or maybe it’s “nearly” 5 million—or perhaps “more than” 5 million. The NRA has never provided solid numbers on how many members it has, yet a look at what data is out there suggests that its claims may be wide of the mark—and the real figure could have dropped by more than 10 percent in the year after Donald Trump was elected president.

The NRA’s membership figures have always been a moving target. In 2013, Mother Jones reported that its public membership claims had fluctuated wildly over the past two decades, suggesting both volatility and and plenty of soundbite-friendly vagueness.

But the overall trend has been upward: The NRA’s self-reported membership has nearly doubled since it hit a low of 2.6 million in 1998—after it was widely criticized for its inflammatory rhetoric (e.g., “jack-booted government thugs”) following the 1993 Waco siege and 1995 Oklahoma City bombing. Its 5-million figure has stayed more or less constant for the past four years.

As my colleague Josh Harkinson reported a few years ago, the NRA is thought to use a few tricks to pad its numbers, such as keeping dead lifetime members on its rolls. It also gives away free memberships to buyers of select gun brands. (Taurus, a major NRA backer, offers one-year memberships to its customers.) As a result, the organization’s core of committed members is likely much smaller than the overall number claimed. In 2011, Bloomberg News found a NRA pitch to prospective sponsors in which it said that about half of its then-4 million members were the “most active and interested.”

Another mystery of NRA membership is its readership gap. Every NRA member receives a subscription to one of its flagship magazines, American Rifleman, American Hunter, or America’s First Freedom. (Shooting Illustrated was added to the lineup in 2016.) Yet there is a considerable difference between these publications’ circulation numbers and the NRA’s membership claims.

According to the most recent data from the Alliance for Audited Media, an independent group that verifies publishers’ circulation stats, the NRA’s three main magazines had a combined print circulation of 3.4 million in December 2017. Add the NRA’s estimate of Shooting Illustrated‘s circulation, and the figure comes to 3.7 million—a far cry from 5 million. So why aren’t a quarter of the NRA’s members getting their free magazines?

Some members may not want a free magazine. Others may read the publications’ digital versions. However, the most recent circulation statements printed in American Rifleman, American Hunter, and America’s First Freedom list their “electronic copy circulation” as “N/A.” The NRA told the Washington Post in 2013 that 600,000 members didn’t get a magazine and 200,000 read their magazine online. If those numbers were accurate and have grown along with membership, a few hundred thousand members are still unaccounted for. (The NRA has not responded to a request for comment.)

Missing readers aside, magazine circulation seems like a good indicator of the ebb and flow of the NRA’s size and its members’ interests. Over the past two decades, the circulation of American Rifleman, the NRA’s most popular magazine, has grown along with its membership figures. Between 2008 and 2018, the NRA says it added roughly 1 million new members—a surge that matches the gun industry’s “Barack boom,” which was fueled by the NRA’s unrelenting portrayal of President Barack Obama as a threat to democracy and gun rights. The circulation of American Rifleman shot up from nearly 1.4 million in 2008 to an all-time high of 2.2 million in 2014.

Currently, more than half of NRA readers receive American Rifleman. American Hunter‘s numbers have been slipping for years, possibly reflecting the declining popularity of hunting. Less than one-fifth of the NRA’s readership gets America’s First Freedom, which is devoted almost entirely to political messaging. (The current issue’s cover story is about “The Coming Socialist Wave That Will Drown Your Guns.”)

The NRA’s most recent magazine data suggests that it has hit a significant post-election slump. While all three magazines were adding readers before the November 2016 election, they started losing them over the next year. Between December 2016 and December 2017, American Rifleman recorded a nearly 11 percent circulation drop and American Hunter reported an 8 percent drop. America’s First Freedom lost nearly 16 percent of its readers.

Overall, more than 11 percent of the three magazines’ readers have left in the last year. It’s a tough time for print media, but this suggests that many NRA supporters let their memberships lapse after Trump beat Hillary Clinton. This wouldn’t be surprising: The NRA has long relied upon the threat of liberal gun-grabbers to recruit new members and retain old ones. But there’s no reason to think this trend will hold. The NRA never lets a good crisis go to waste.