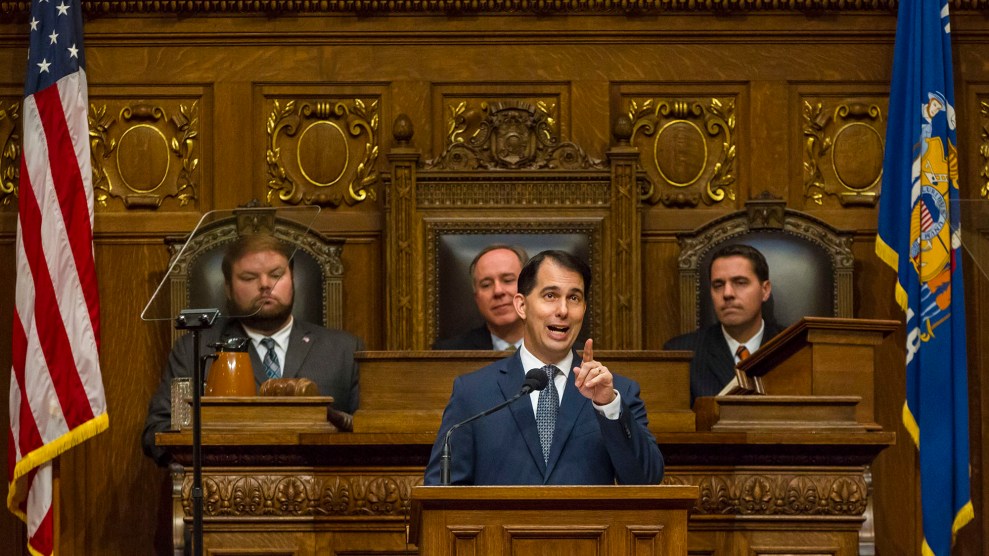 On Thursday, a judge ruled that Wisconsin Gov. Scott Walker must hold special elections this spring to fill two vacant state legislative seats that some Republicans fear could flip to the Democrats. But instead of scheduling new elections, Wisconsin Republicans came up with a different plan: They would convene a special legislative session to change the law governing special elections so they wouldn’t have to hold them before November.

Walker had a “plain and positive duty” to hold the elections, Dane County Circuit Court Judge Josann Reynolds, who was appointed by Walker in 2014, ruled on Thursday. She instructed Walker to issue an order within a week scheduling the elections.

But the next day, Walker threw his support behind the plan to change the election law. “It would be senseless to waste taxpayer money on special elections just weeks before voters go to the polls when the Legislature has concluded its business,” Walker said in a statement. “This is why I support, and will sign, the Senate and Assembly plan to clarify special election law.”

Democrats immediately denounced the move, saying Republicans were going to extraordinary lengths to avoid holding an election for two legislative seats previously held by Republicans that have been vacant since December. “Even for Republicans in Wisconsin, this would be a stunning action to keep citizens from exercising their right to vote,” said former Attorney General Eric Holder, who leads a Democratic group that sued Walker on behalf of Wisconsin voters in the two districts. “They appear to be afraid of the voters of Wisconsin.”

Wisconsin Republicans’ refusal to follow the court’s order is part of a broader trend among Republicans at the state level to nullify legal rulings they don’t like and attack judges who rule contrary to their positions.

In Pennsylvania, 12 Republican lawmakers have introduced legislation to impeach four Democratic justices on the state supreme court after the court struck down Pennsylvania’s GOP-drawn congressional redistricting map as an unconstitutional gerrymander. The old map gave Republicans an overwhelming 13-5 advantage in the state’s congressional delegation, even though the state is about evenly split between Democrats and Republicans, while the new one is expected to result in a smaller Republican edge. “If we allow this to stand without taking action, the future courts are going to decide that the court has the ultimate ability to write law and they can turn around and cite this as precedent where we’ve allowed it to occur with no repercussions on the court,” said Rep. Cris Dush, the bill’s lead sponsor.

The impeachment bill prompted a rare rebuke from the chief justice of the Pennsylvania Supreme Court, Thomas Saylor, a Republican who dissented from the redistricting ruling. “Threats of impeachment directed against Justices because of their decision in a particular case are an attack upon an independent judiciary, which is an essential component of our constitutional plan of government,” he said in a statement.

Impeachment of the justices requires a majority vote in the state House and two-thirds in the Senate. Republicans currently control 120 of 203 seats in the House and 34 of 50 seats in the Senate, giving them just enough votes to remove the justices if every Republican votes for the measure. Dush says he’s received assurances from the leaders of the Pennsylvania legislature that they’ll allow a vote on his bill.

No state has done more to undermine the independence of the judiciary than North Carolina. The Republican–led legislature there has embarked on an unprecedented plan to transform the state’s courts by gerrymandering judicial maps to elect more Republican judges, making judicial elections partisan instead of nonpartisan, and possibly even allowing the legislature to pick judges instead of the voters.

Courts have overturned 14 laws passed by the North Carolina legislature since 2011. But instead of changing their policies, Republicans are trying to radically change the makeup of the state’s courts. Democratic Gov. Roy Cooper calls it an attempt to “rig the system.”

In all three of these states—Wisconsin, Pennsylvania, and North Carolina—courts have struck down redistricting maps drawn by Republicans. As their hold on power becomes less secure with the prospect of a Democratic wave in 2018, the GOP is only amplifying its attacks on the judiciary.