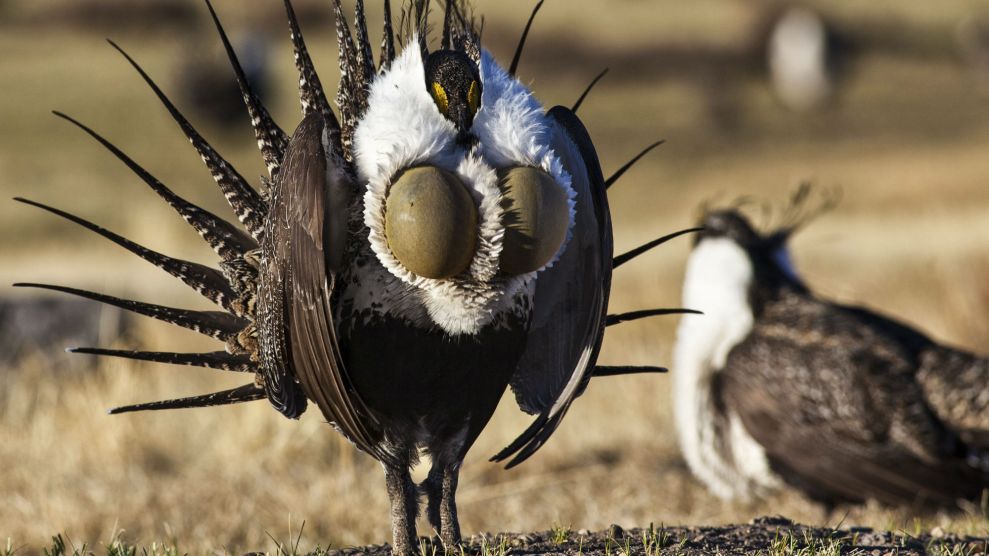 One weird western bird is again at the center of a battle between conservationists and the federal government. Now, like a lot of environmental causes under the Trump administration, the greater sage-grouse—once a candidate for the endangered species list—faces an uncertain future.

Groups like the National Wildlife Federation, the Audubon Society, and the Natural Resources Defense Council are saying Trump’s Interior Secretary, Ryan Zinke, is refusing to honor an Obama-era, bipartisan plan to protect the quirky, ground-dwelling bird native to the American West.

In 2015, the sage-grouse population had declined by up to 90 percent from historic levels due to increased drilling and mining in its 167-million-acre sagebrush habitat. This worried environmentalists and hunters and sparked a contentious debate over whether the species should be listed as endangered. In the end, the $45 million plan implemented by western states, the Department of the Interior, and the USDA was largely a compromise between industry-minded conservatives and environmentalists that required cooperation among more than 1,100 ranchers in 11 states to protect nearly 70 million acres of sage-grouse habitat from commercial activity. As conservatives had hoped, it kept the sage-grouse off the endangered species list, and it clocked in as the largest conservation effort in U.S. history.

“The blueprint they’re adopting is basically a wish list for industry.”

Then came the Trump administration. In June, Zinke reignited the years-long battle over the sage-grouse when he announced intentions to review the plan to ensure that “conservation efforts do not impede local economic opportunities.” In October, Zinke formally moved to modify the plan after hearing recommendations from oil and gas industry interests. Finally, in December, the Department of the Interior’s Bureau of Land Management issued a memo de-prioritizing preserving sage-grouse habitat in oil and gas leasing agreements.

“The blueprint they’re adopting is basically a wish list for industry,” Bobby McEnaney, the senior deputy director for the Western Renewable Energy Project at the Natural Resources Defense Council, tells Mother Jones. “There’s no biology or science to support it.”

A recently-aired, 30-second television ad titled, “A Handshake Means Something,” features a hunter and two adolescents trekking thorough Western plains. “In the West, a handshake means something,” the hunter narrates. “Even if it’s hard to come by, we honor it.” It concludes a call to, “Ask Secretary Zinke to honor our deal.” (The ad, which was produced by the NWF, will be shown online and on public television in Colorado, Wyoming, Montana, Idaho, Nevada, and Washington, D.C.)

“Westerners had this [under control] and outsiders decided they could make it better,” Brian Rutledge, vice president of the Audubon Society and “champion of the sagebrush sea,” tells Mother Jones, referring to Zinke’s takeover of the conservation plan. “We’ve got this. Let us be.”

Last year, leasing in sage-grouse habitat “increased dramatically” in Wyoming, which is home to the largest sage-grouse population in the West. The BLM plans to lease “seven times more acres” of sage-grouse habitat this quarter than it did in the same time last year, according to data from the Nature Conservancy that was published by High Country News.

“In Wyoming, the best solutions to any problem come from working together. We did that with the sage-grouse issue. It was good old-fashioned kitchen-table problem solving,” said Walt Gasson, the hunter featured in the TV ad, in a statement. “We invite those in D.C. to get down off their high horses, come to the table and join us to honor the deal.”

The Department of the Interior did not respond to a request for comment from Mother Jones.

If the sage-grouse disappear, it could be disastrous for their ecosystem. As an “indicator species,” the sage-grouse is a “canary in a coal mine,” of sorts, says Holly Copeland, a conservation scientist at the Nature Conservancy who analyzed the BLM leasing data, because scientists use its health to measure the wellbeing of more than 350 other species that share its habitat. And, of course, the bird has charisma—the sage-grouse is known for its spectacular mating dance, in which males jiggle air sacs on their chests. It is something else:

“The word ‘iconic’ is thrown around a lot by environmentalists, but this is an iconic species,” McEnaney says about the sage-grouse. “It’s hard not to like this bird once you get to know it.”