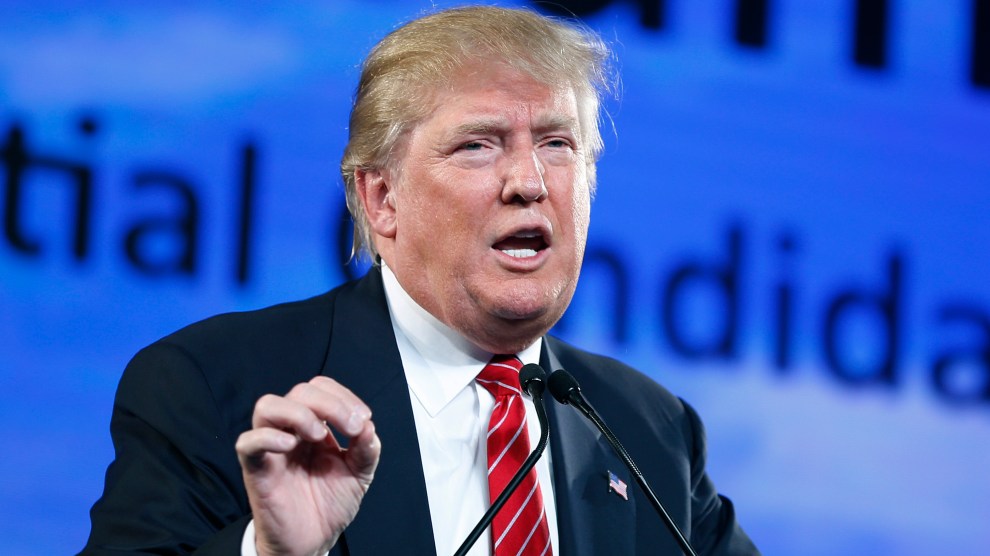 Update, July 16, 2018: Maria Butina has been charged in an alleged political conspiracy against the United States.

While researching the strange story of two Russian gun aficionados who cultivated Donald Trump’s presidential campaign via the National Rifle Association, we came across a little-noticed but noteworthy episode concerning Trump and US sanctions against Russia. Sanctions have been a source of extraordinary conflict between the president and Congress and a matter of clear significance to special counsel Robert Mueller’s ongoing investigation.

Just a month after Trump announced his campaign for the White House, he spoke directly to Maria Butina, the protégé of the powerful Russian banking official and Putin ally Alexander Torshin. During a public question and answer session at FreedomFest, a conservative gathering in Las Vegas in July 2015, Butina asked Trump what he would do as president about “damaging” US sanctions. Trump suggested he would get rid of them.

“I am visiting from Russia,” Butina said into the mic.

“Ahhhhh, Putin!” Trump interjected, prompting laughter from the audience as he added a mocking riff about the current president: “Good friend of Obama, Putin. He likes Obama a lot. Go ahead.”

“My question will be about foreign politics,” Butina continued. “If you will be elected as president, what will be your foreign politics especially in the relationships with my country? And do you want to continue the politics of sanctions that are damaging of both economy [sic]? Or you have any other ideas?”

After going off on Obama and digressing into trade policy, Trump responded: “I know Putin, and I’ll tell you what, we get along with Putin… I believe I would get along very nicely with Putin, OK? And I mean, where we have the strength. I don’t think you’d need the sanctions. I think we would get along very, very well.”

Trump did not appear to know who Butina was. But Torshin claims to have met Trump three months prior and had a “jovial exchange” with him at the NRA annual convention in Nashville, Tennessee.

Here’s a video of the exchange between Trump and Butina, which was posted at the time by a group calling itself LetsTalkNevada:

It’s long been clear that the Trump campaign wanted to ease up on the Kremlin and went to great lengths to covertly pursue that goal, from ex-national security adviser Michael Flynn’s lies to the FBI about discussing sanctions with the Russian ambassador, to the cover-up of the now infamous June 2016 Trump Tower meeting supposedly about “adoptions.” Among the major remaining questions today is whether Trump’s posture toward Putin has been financially motivated—or whether something else may lie behind his bizarrely favorable treatment of the Russian dictator that we don’t yet know about.