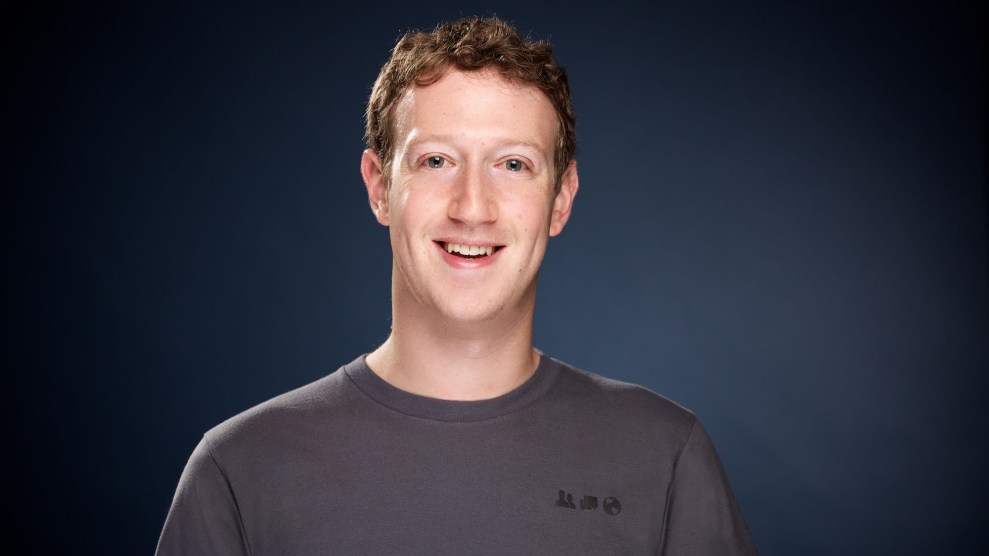 Mark Zuckerberg on Wednesday issued a statement on the growing controversy around Cambridge Analytica’s acquisition and use of tens of millions of people’s personal Facebook data.

In the 935-word statement, Zuckerberg reassures users that “the good news is that most important actions to prevent this from happening again” were already taken in 2014, when the company limited the amount of data that could be acquired by third-party apps on the social media platform. While the statement acknowledged the company “made mistakes,” it avoided an explicit apology or the word “sorry.”

Zuckerberg’s move comes four days after the New York Times reported that Cambridge Analytica, a company that provides political operators detailed information on millions of voters, obtained data on more than 50 million American Facebook users from a University of Cambridge researcher named Aleksandr Kogan. Cambridge Analytica’s connections to Republican megadonor Robert Mercer and Steve Bannon, an ex Trump campaign chairman and a senior White House adviser, may have allowed the Trump campaign to access and use the data to target potential voters, according to the Times.

Zuckerberg’s statement, along with another the company posted to its website, promised the company would make additional changes. Facebook says it will review apps that had access to users’ data prior to the limits it put in place in 2014, and audit those apps for misused personal data. The company commits to inform users of “data misuse,” and turn off apps’ access to data if users haven’t opened them in three months. It will also encourage users to review the apps they’ve connected to their accounts, and expand a bug bounty program, which works with researchers to identify security weaknesses.

Zuckerberg’s statement does not address at least one key question: Does the company know if the data obtained by Kogan and, subsequently, Cambridge Analytica was used to target Facebook’s own users through the platform’s highly-detailed advertising platform? That question would help to clear up whether the company knew whether the data obtained by Cambridge Analytica was used by President Donald Trump’s presidential campaign.

Sen. Mark Warner (D-Va.) said although he’s glad Facebook plans to notify its users whose data was shared, that’s a “basic first step” and the company still has a lot to answer for. “I still want to know why it took Facebook so long to do anything about this, particularly when there are indications that this user data was exploited by Cambridge Analytica for years,” he said in a statement to Mother Jones. “Mr. Zuckerberg needs to testify before the Senate and answer some tough questions about Russian activity on the platform, and the way his company protects—or doesn’t—its users’ data.”

The company did not immediately respond to request for comment.

I want to share an update on the Cambridge Analytica situation — including the steps we’ve already taken and our next steps to address this important issue.

We have a responsibility to protect your data, and if we can’t then we don’t deserve to serve you. I’ve been working to understand exactly what happened and how to make sure this doesn’t happen again. The good news is that the most important actions to prevent this from happening again today we have already taken years ago. But we also made mistakes, there’s more to do, and we need to step up and do it.

Here’s a timeline of the events:

In 2007, we launched the Facebook Platform with the vision that more apps should be social. Your calendar should be able to show your friends’ birthdays, your maps should show where your friends live, and your address book should show their pictures. To do this, we enabled people to log into apps and share who their friends were and some information about them.

In 2013, a Cambridge University researcher named Aleksandr Kogan created a personality quiz app. It was installed by around 300,000 people who shared their data as well as some of their friends’ data. Given the way our platform worked at the time this meant Kogan was able to access tens of millions of their friends’ data.

In 2014, to prevent abusive apps, we announced that we were changing the entire platform to dramatically limit the data apps could access. Most importantly, apps like Kogan’s could no longer ask for data about a person’s friends unless their friends had also authorized the app. We also required developers to get approval from us before they could request any sensitive data from people. These actions would prevent any app like Kogan’s from being able to access so much data today.

In 2015, we learned from journalists at The Guardian that Kogan had shared data from his app with Cambridge Analytica. It is against our policies for developers to share data without people’s consent, so we immediately banned Kogan’s app from our platform, and demanded that Kogan and Cambridge Analytica formally certify that they had deleted all improperly acquired data. They provided these certifications.

Last week, we learned from The Guardian, The New York Times and Channel 4 that Cambridge Analytica may not have deleted the data as they had certified. We immediately banned them from using any of our services. Cambridge Analytica claims they have already deleted the data and has agreed to a forensic audit by a firm we hired to confirm this. We’re also working with regulators as they investigate what happened.

In this case, we already took the most important steps a few years ago in 2014 to prevent bad actors from accessing people’s information in this way. But there’s more we need to do and I’ll outline those steps here:

First, we will investigate all apps that had access to large amounts of information before we changed our platform to dramatically reduce data access in 2014, and we will conduct a full audit of any app with suspicious activity. We will ban any developer from our platform that does not agree to a thorough audit. And if we find developers that misused personally identifiable information, we will ban them and tell everyone affected by those apps. That includes people whose data Kogan misused here as well.

Second, we will restrict developers’ data access even further to prevent other kinds of abuse. For example, we will remove developers’ access to your data if you haven’t used their app in 3 months. We will reduce the data you give an app when you sign in — to only your name, profile photo, and email address. We’ll require developers to not only get approval but also sign a contract in order to ask anyone for access to their posts or other private data. And we’ll have more changes to share in the next few days.

Beyond the steps we had already taken in 2014, I believe these are the next steps we must take to continue to secure our platform.

I started Facebook, and at the end of the day I’m responsible for what happens on our platform. I’m serious about doing what it takes to protect our community. While this specific issue involving Cambridge Analytica should no longer happen with new apps today, that doesn’t change what happened in the past. We will learn from this experience to secure our platform further and make our community safer for everyone going forward.

I want to thank all of you who continue to believe in our mission and work to build this community together. I know it takes longer to fix all these issues than we’d like, but I promise you we’ll work through this and build a better service over the long term.

This story has been updated to include a statement from Sen. Mark Warner.