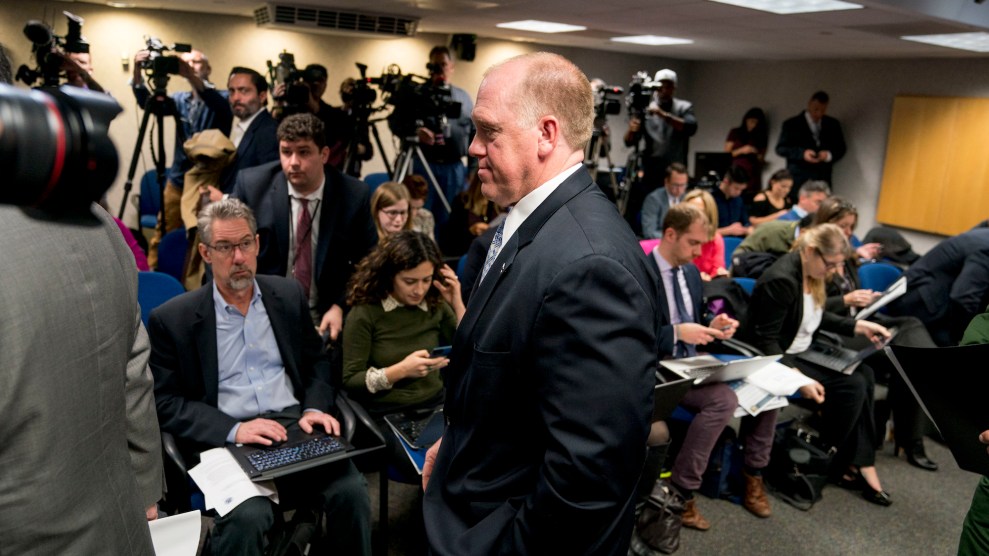 Thomas Homan, the acting director of US Immigration and Customs Enforcement, is retiring, he announced on Monday. Since taking over ICE last year, Homan has become the face of Trump’s immigration crackdown and made headlines for saying that all undocumented immigrants “should be uncomfortable.”

Last January, Homan retired as the head of ICE’s detention and deportation division. As he was leaving his retirement ceremony, then-Homeland Security Secretary John Kelly called to ask him to take over the agency, a 20,000-person division of the Department of Homeland Security that deports more than 200,000 people per year. Homan returned to work the next week as ICE’s acting director.

Kelly and Homan had an immediate impact on immigration enforcement and have created widespread fear among immigrants. In 2017, ICE arrests increased by 41 percent, while arrests of people without criminal records nearly tripled, from 17,000 to 46,000.

“The decision to leave federal service after more than 34 years is bittersweet, but my family has sacrificed a lot in order for me to serve and it’s time for me to focus on them,” Homan said in a statement. “I am humbled and inspired by the 20,000 American patriots who serve this agency and protect our nation, increasingly in the face of unfair and false criticism from politicians and the media.”

President Donald Trump nominated Homan to be ICE’s permanent director in November. Mother Jones reported earlier this month that the Senate Homeland Security Committee had still not received the biographical information needed to advance his nomination. Last week, 17 Democratic senators called on DHS Secretary Kirstjen Nielsen to provide the missing documents. An ICE official told Mother Jones that Homan informed DHS leadership earlier this year that he planned to retire in the summer due to family considerations.

The Wall Street Journal first reported that Homan would be retiring and plans to leave his position in June. He decided to step aside to avoid what would have been a contentious confirmation process, a source told the Journal. Another source said family considerations played an important role.

Alonzo Peña, who served as ICE’s deputy director during the Obama administration, told Mother Jones in February that Homan’s combative approach might have been influenced by future job prospects:

Immigration enforcement, he says, “has become very profitable for some people” in the private detention business. He adds, “There certainly would be a look by some of these companies that are making huge profits at somebody like Tom when he retires.” Daniel Ragsdale, who preceded Homan as acting ICE director, now works for GEO Group, America’s second-largest private prison and detention company. In response to a question about a possible future for Homan in the detention industry, Liz Johnson, an ICE spokeswoman, says Homan “chose to pass up an opportunity in the private sector in order to continue serving his country at the request of the president of the United States.”

During the Obama administration, Homan was seen as a loyal civil servant who was willing to compromise. Some of his former colleagues have been shocked by his rhetoric under Trump, including his decision to call for criminal charges against politicians who limit cooperation with his officers. Cecilia Muñoz, who ran the White House Domestic Policy Council under Barack Obama and worked closely with Homan, said, “I find the Tom Homan that I see on TV now unrecognizable compared to the one that I saw in the Situation Room.”

This story has been updated to include the statement from Homan and comment from the ICE official.