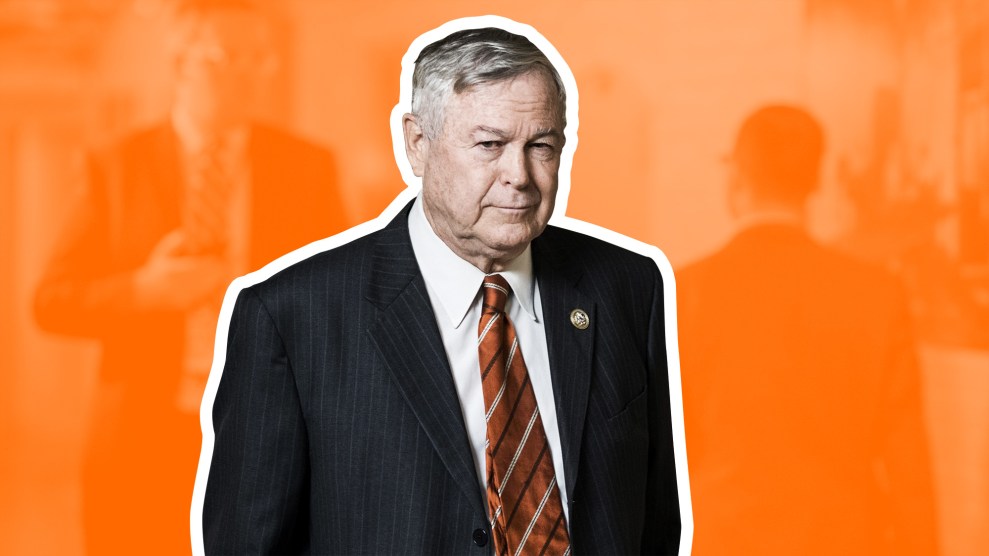 Early last month, at a debate between the Democratic candidates running to unseat Rep. Dana Rohrabacher, the 15-term Orange County, California, Republican, local business owner Laura Oatman addressed a longstanding fear among the district’s Democratic voters. “I want to address the elephant in the room. There’s a lot of chatter on Facebook about, ‘Oh my gosh, there’s too many Democrats. We’re gonna split the vote. We need to unite behind one candidate.’ Right?” she asked. “Well let me put your mind at rest. Friday is the filing deadline. If there was going to be another strong Republican in this race, we would have known it by now… We’re probably looking at two names on the ballot in November: Dana Rohrabacher, and one of the five of us standing up here.”

Her statement at the debate was in reference to a California electoral oddity called the “jungle primary,” in which the top two vote getters in the June primary advance to the general election, regardless of their party affiliation. This system has the potential to create chaos in a race—if a party fields too many candidates, the vote can be split too narrowly and hand the opposition an easy win. As I’ve written previously, this type of thing has happened before in a nearby district. In the case of Rohrabacher’s seat, Oatman assumed no other viable Republican would join the race, and that it was a sure thing that whichever Democrat got the most votes would face off against the longterm incumbent in November.

Oatman assumed no other viable Republican candidate would join the race. She spoke too soon.

Oatman, it turns out, spoke too soon, and now prominent Orange County Republican Scott Baugh is throwing a wrench into the Democratic mission to retake the House in November, in part by taking the seven California districts that voted for both Republican representatives and Hillary Clinton in 2016. The jungle primary is already an acute threat in two nearby Southern California districts where several strong Republicans jumped in the race after the party’s incumbents, Ed Royce and Darrell Issa, announced their retirements early this year. Each race still has a handful of Democrats despite candidates calling on each other to drop out and rally behind a single candidate.

Now, a similar dynamic is playing out in Orange County’s 48th district—which Dems were hoping would offer an easier pick up. Rohrabacher, after all, has been dubbed by Politico as “Putin’s favorite Congressman,” and his support in the district has dropped to the low- to mid-30s, according to recent reports. When Baugh, a former chair of the Orange County GOP who served in the California State Assembly from 1995 to 2000, submitted his papers in the late hours on the last day to file to become a candidate, he gave the Democrats an unforeseen threat—and getting shut out of the November top-two run-off became a very real possibility.

Within two weeks of Baugh joining the race, Oatman dropped out and formally endorsed Harley Rouda, a businessman and one of the remaining Democratic frontrunners, and she urged the other six candidates in her party to do the same. “This is not about any one of us. This is about all of us,” she said in a statement, adding that Rouda “represents the best choice to flip the 48th District from red to blue.” Last week, another leading candidate, Michael Kotick, joined her in leaving the race and backing Rouda.

Now, three Democratic frontrunners remain: Rouda, stem cell researcher Hans Keirstead, and Omar Siddiqui, a trial attorney. They each have something that makes them seem like the potential Democratic winner: Rouda has built a large social media following and wows crowds at debates with his command of a wide range of issues relevant at the local and national level. He also isn’t scared to go toe-to-toe with other candidates and their mutual enemy, Rohrabacher. Keirstead has courted the party establishment, winning the backing of the state Democratic Party and appealing to voters who favor evidence-based solutions that they think he can provide with his research background. Siddiqui, who has the most relevant real-world experience, is national security advisor to the FBI and has worked with former FBI director James Comey and President Obama.

When asked about the top-two threat, Omar Siddiqui’s campaign manager, Luis Aleman, told me simply, “We’re in this race.”

Perhaps because of these factors, none of them are likely to drop out of the race. Last month, when asked about the top-two threat, Siddiqui’s campaign manager, Luis Aleman, told me simply, “We’re in this race.” That hasn’t changed; Aleman tells me that when Michael Kotick dropped out, he was at an endorsement meeting of the Orange County Young Democrats. And despite Kotick’s pleas to the audience to support Rouda, Siddiqui still won the endorsement. “We feel pretty confident…going into the homestretch,” Aleman says.

In an interview with Rouda last month, as a way of saying “no” to the question of whether he would drop out in order to help the party coalesce around one Democrat, he listed his accolades. “We’ve raised more money than anybody else. We have more cash on hand than Rohrabacher…We have more endorsements than anybody else. If you look at straw polls from every single debate, we have handily won every single debate,” he told me. He’s only secured more support since then.

In contrast, Keirstead is alone in indicating that he might, under specific conditions, be willing to drop out. He tells me, “If I was clearly not leading this race on a number of metrics, just not there, then it’s more important to me that the district be blue than it be me that makes it blue.” But as he is performing well in public polls and has secured an endorsement from the California Democratic Party, he contends that he indeed is leading the race.

This all adds up to a very real nightmare for Democrats. Between now and the June 5 primary, Rouda and Keirstead will likely cut each other down—they’ve had a long-running feud that at times spills out in humiliating ways in public forums. And Siddiqui will have to battle the district’s naysayers who contend that though he is qualified, he isn’t electable because of his name, presumably meaning that it sounds too terrorist-y to win over the upper-class, white voters of the district’s coastal elites. If none of them budge, it’s very possible that Baugh or Rohrabacher will be in Congress come January.

At the March debate, Rouda urged voters to support a candidate who is “able to take a punch and throw a punch along the way, because it’s going to get real ugly between the primary and general.” He added, “And I can’t wait to throw punches at Rohrabacher.” But, as of now, he might not even get the chance.