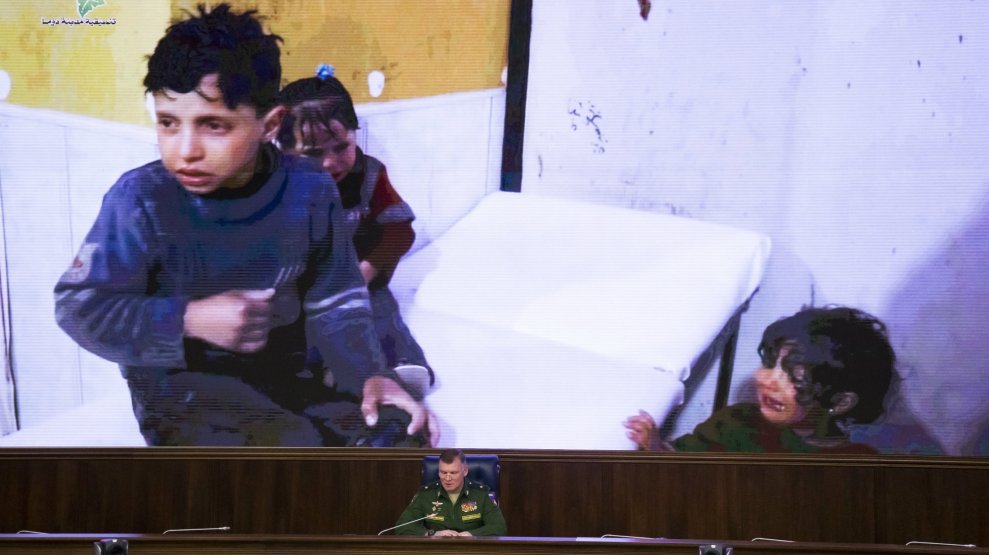 Last weekend in the Syrian town of Douma, more than 500 people had symptoms of a chemical attack as they foamed at the mouth and struggled to breathe, according to the World Health Organization. The suspected attack by the Syrian government ultimately killed more than 40 people, many of them children.

Syria, and its supporters Russia and Iran, have denied the used of chemical weapons.

Instead, Russian Defense Ministry spokesman, Maj. Gen. Igor Konashenko pointed a finger at the United Kingdom on Friday. According to USA TODAY, Konashenkov released statements he said were from medics at Douma’s hospital who claimed none of the patients were hurt by chemicals. People with video cameras entered the hospital, yelling that patients had been struck with chemical weapons, he added. Konashenkov said that Russia has “evidence that proves Britain was directly involved in the provocation,” but didn’t provide more details or evidence to back up his claim.

BREAKING: The Russian military says that an alleged chemical attack in Syria was staged and directed by Britain.

Douma was the last holdout of rebel groups in eastern Ghouta. The region has been under siege for years and has been the victim of multiple chemical attacks in the past. On Friday Russian Foreign Minister Sergei Lavrov also claimed he had “irrefutable evidence” the Douma attack was staged with the help of an unspecified foreign intelligence agency, but he didn’t provide any evidence.

These allegations may be part of an escalating war of words between Britain and Russia. Last month, a former Russian spy and his daughter were poisoned in the UK with what officials have said was a military grade nerve agent. The UK says Russia was behind the poisoning, though Moscow has denied any role.

President Trump has promised to retaliate for the Syrian chemical attack and warned Russia about its support of Syrian President Bashar al-Assad. “You shouldn’t be partners with a Gas Killing Animal who kills his people and enjoys it!” Trump tweeted Wednesday.

Russia vows to shoot down any and all missiles fired at Syria. Get ready Russia, because they will be coming, nice and new and “smart!” You shouldn’t be partners with a Gas Killing Animal who kills his people and enjoys it!

Days before images from the attack appeared, Trump told his military commanders to wrap up operations and start withdrawing US troops from Syria within a few months.