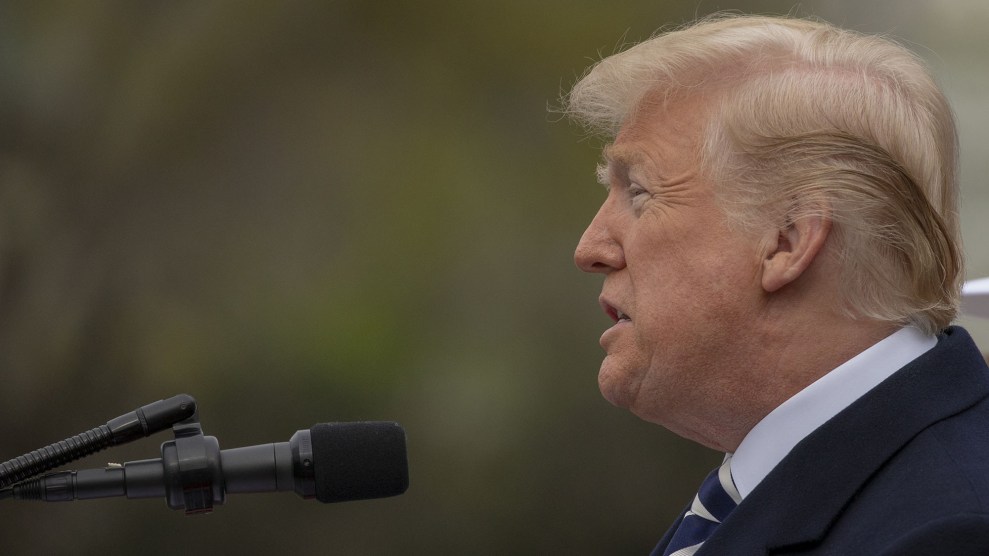 President Donald Trump speaks on the South Lawn of the White House during the French state visit on Tuesday.Alex Edelman/CNP via ZUMA

President Donald Trump suggested during an interview on Fox & Friends Thursday that he might become involved in the work of in his Justice Department—a threat that could signal a desire by the commander in chief to interfere with investigations into his campaign and business associates, as well as investigations relating to his perceived political enemies.

“I’ve taken the position—and I don’t have to take this position, and maybe I’ll change—that I will not be involved with the Justice Department,” Trump said. “I will wait till this is over,” he added, referring to special counsel Robert Mueller’s investigation into possible collusion between the Trump campaign and Moscow and, reportedly, potential obstruction of justice by Trump.

The Justice Department and the FBI are supposed to maintain independence and avoid political interference in criminal investigations and prosecutions. But Trump has expressed a desire for an attorney general who will shield him from investigations. Since taking office, Trump has fired former FBI Director James Comey and pressured Attorney General Jeff Sessions to remove Comey’s deputy, Andrew McCabe. Trump has also reportedly considered removing other top-ranking Justice Department officials, including Sessions, who recused himself from the Russia probe against Trump’s wishes; Mueller; Deputy Attorney General Rod Rosenstein, who appointed and oversees Mueller; and FBI Director Christopher Wray, whom Trump appointed to replace Comey. Trump may have been referring to some of these people on Thursday when he said, “They have this witch hunt going on with people in the Justice Department that shouldn’t be there.”

Trump has also repeatedly suggested the DOJ should prosecute some of his critics, including Hillary Clinton and Comey.

Trump returned to the issue of Justice Department independence a minute later. “I’m very disappointed in my Justice Department,” he said. “But because of the fact that it’s going on, and I think you’ll understand that, I have decided that I won’t be involved. I may change my mind at some point, because what’s going on is a disgrace.”

At the end of the free-wheeling Fox interview, Trump returned to the issue a third time, accusing top FBI officials of corruption, and in particular criticizing McCabe, who was recently fired by Sessions over allegations that McCabe had made misleading statements about his actions relating to the FBI’s 2016 investigation into Clinton. “Our Justice Department—which I try and stay away from, but at some point I won’t—our Justice Department should be looking at that kind of stuff, not the nonsense of collusion with Russia,” the president said.

A lot happened in that interview, but for my money the most important thing was Trump saying that “our Justice Department — which I try and stay away from, but at some point I won’t — our Justice Department should be looking at “corruption at the top of the FBI.” pic.twitter.com/Nc4jMhM0Am