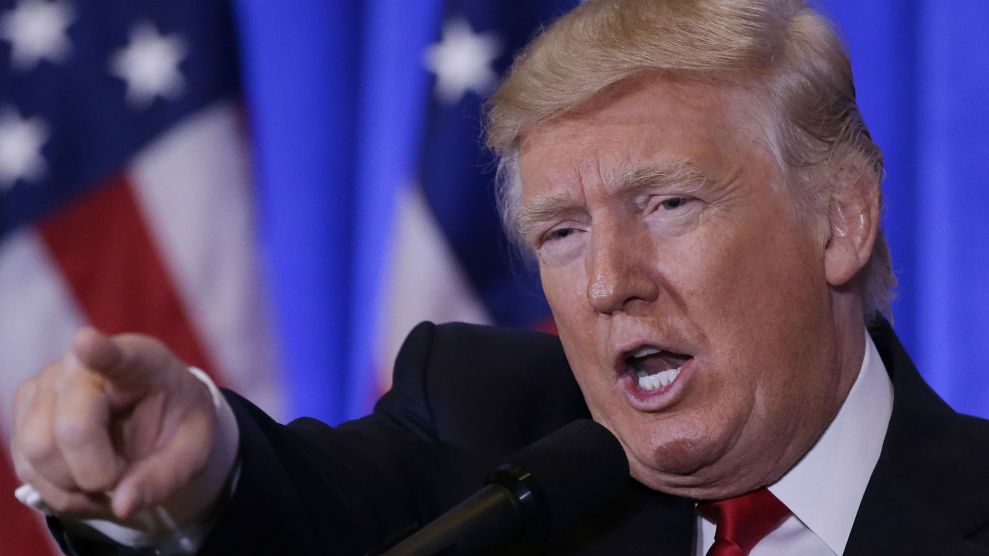 On Sunday morning, President Trump took to Twitter to condemn the suspected chemical attack that killed at least 42 people in the Syrian rebel-held town of Douma on Saturday night.

More than 500 people, including many children, have been brought to area hospitals with symptoms consistent with exposure to some kind of poison gas, including “signs of respiratory distress, central cyanosis, excessive oral foaming, corneal burns, and the emission of chlorine-like odor,” noted a joint statement from the opposition-linked Syrian Civil Defense and the Syrian American Medical Society.

The Syrian and Russian governments have denied the allegation that a chemical agent was used. Syrian President Bashar Assad’s administration called the allegation “fabrications” of the opposition.

But Trump took to Twitter to condemn the “mindless CHEMICAL attack,” blaming Russia and its president Vladimir Putin and also his predecessor, President Barack Obama:

Many dead, including women and children, in mindless CHEMICAL attack in Syria. Area of atrocity is in lockdown and encircled by Syrian Army, making it completely inaccessible to outside world. President Putin, Russia and Iran are responsible for backing Animal Assad. Big price…

….to pay. Open area immediately for medical help and verification. Another humanitarian disaster for no reason whatsoever. SICK!

If President Obama had crossed his stated Red Line In The Sand, the Syrian disaster would have ended long ago! Animal Assad would have been history!

Trump was referring to Obama’s decision to respond to previous chemical weapons attacks in Syria, something Obama called a “red line,” with negotiation, after threatening but never undertaking military action against Assad’s regime. Trump has touted his opposition to Obama’s “red line” decision since the 2016 campaign trail, when he tried to pin the lack of military action on candidate Hillary Clinton, although she was not serving as Secretary of State at the time. In his 2016 Republican national convention speech, Trump called Obama’s decision not to strike Syria a “humiliation.”

But in a number of tweets from 2013 and 2014, Trump himself strongly opposed retaliating with military action against Syria:

AGAIN, TO OUR VERY FOOLISH LEADER, DO NOT ATTACK SYRIA – IF YOU DO MANY VERY BAD THINGS WILL HAPPEN & FROM THAT FIGHT THE U.S. GETS NOTHING!

President Obama, do not attack Syria. There is no upside and tremendous downside. Save your "powder" for another (and more important) day!

Trump’s tweets this weekend also seem to complicate the less aggressive stance on Syria that the president himself has taken in recent weeks: although he ordered a strike on Syria following a chemical attack last year, just last week Trump vowed that an exit for US troops from Syria is imminent. On Sunday on ABC’s “This Week,” White House Homeland Security and counterterrorism adviser Thomas Bossert said that military action in response to this weekend’s attack was not “off the table.”

With concerns over another chemical attack in Syria, @TomBossert45 tells @MarthaRaddatz: “This is one of those issues on which every nation, all peoples, have all agreed, and have agreed since WWII, is an unacceptable practice… I wouldn’t take [military action] off the table.” pic.twitter.com/c7I9NidTy6