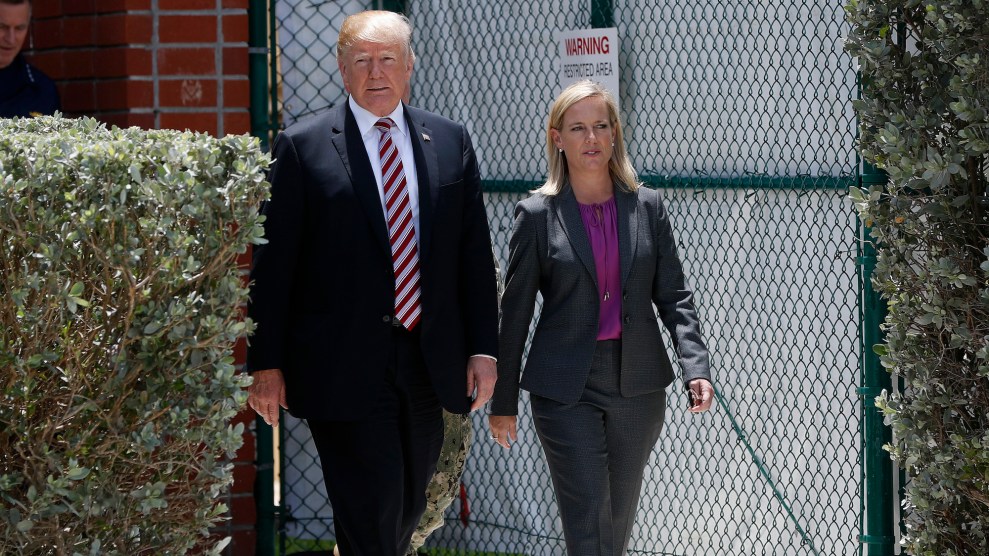 After a brief hiatus, President Donald Trump is back to tweeting that Mexico should crack down on migrants. Trump wrote Monday morning that Mexico “must stop people from going through Mexico and into the U.S.” and said his administration might not approve a new free trade agreement with Mexico if the country ignores his demands. Like similar tweets from earlier this month, his attacks came shortly after Fox News reported on a “caravan” of Central American migrants traveling north through Mexico.

Mexico, whose laws on immigration are very tough, must stop people from going through Mexico and into the U.S. We may make this a condition of the new NAFTA Agreement. Our Country cannot accept what is happening! Also, we must get Wall funding fast.

Trump did not specify what he hopes Mexico will do to stop people from coming to the United States, but his administration has been pushing Mexico to adopt a “safe third country” agreement that would allow the United States to return Central American asylum seekers to Mexico, despite significant concerns about Mexico’s ability to protect people fleeing persecution. The United States has a similar agreement with Canada. Homeland Security Secretary Kirstjen Nielsen said in a statement on Monday that her department “encourages persons with asylum or other similar claims to seek protections in the first safe country they enter, including Mexico.”

But if Trump’s aim is to get Mexico to agree to a “safe third country” deal, then he’s long been undermining his own effort. Trump’s frequent attacks on Mexico have pushed the country away from taking in more asylum seekers. Last week, an unnamed Mexican official told Politico that Mexico was open to striking an asylum deal until Trump reportedly “lost his temper” during a February call with Mexican President Enrique Peña Nieto. The call and Trump’s refusal to back down from insisting that Mexico will pay for his proposed border wall led Peña Nieto to cancel plans to travel to the United States to meet with Trump, the Washington Post reported in February.

Mexico’s presidential election officially began in late March, and there seems to be little chance that Peña Nieto, who cannot run for reelection, will hurt his party’s political standing by caving to demands from Trump, who is extremely unpopular in Mexico. (Only 5 percent of Mexicans have at least some confidence that Trump will do the right thing on world affairs, according to a 2017 survey from the Pew Research Center.) One hour after Trump’s tweets, Mexico’s foreign secretary, Luis Videgaray, tweeted that Mexico determines its own immigration agenda and that it would be “unacceptable” to tie the North American Free Trade Agreement (NAFTA) to unrelated policies.

The advocacy group Human Rights First found last year that Mexico is “far from a ‘safe third country.’” The group reported that people in Mexico who “fear persecution are often deported back to danger” and that Mexican immigration agents “often do not take the steps necessary to allow them to apply for asylum.” The number of asylum applications filed in Mexico increased by nearly 700 percent between 2013 and 2016, further straining Mexico’s underfunded asylum agency.

The Trump administration does not appear particularly concerned by those findings. Attorney General Jeff Sessions called for expanding safe third country agreements in October, and Republicans in Congress are backing legislation that would allow immigration authorities to return Central Americans asylum seekers to Mexico, regardless of whether Mexico signs a safe third country agreement. But the bill has little chance of becoming law, so Trump’s best option is to negotiate an agreement. Instead of doing that, he is publicly attacking Mexico during an election in which the country’s political leaders are under pressure to show they can stand up to Trump.