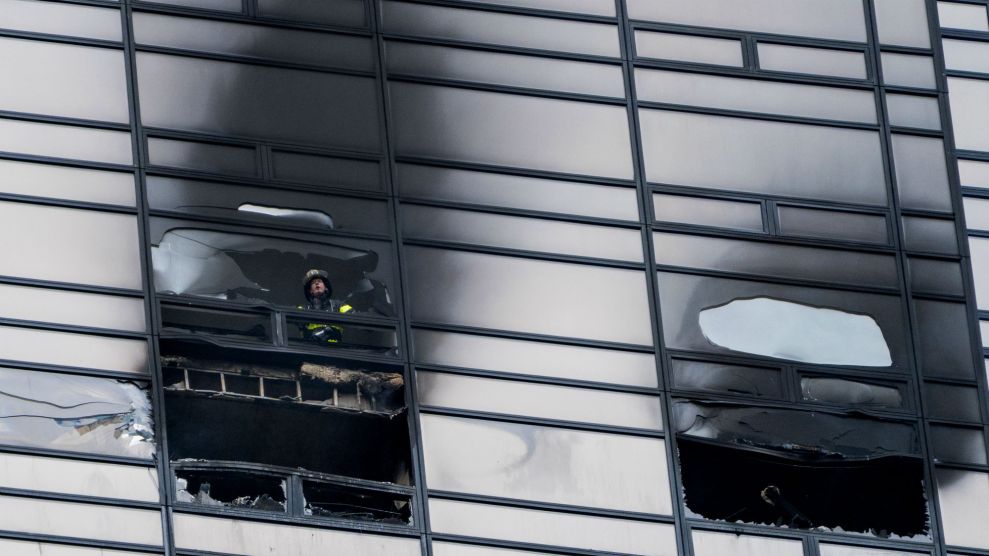 On Saturday, a fire at Trump tower in New York City killed 67-year-old Todd Brassner, a resident of the building, and left six firefighters injured. The blaze, which broke out on the 50th floor and was kept contained to that area, marks the second fire at Trump’s Fifth Avenue building this year. The first broke out on January 8, injuring two civilians and a firefighter, reportedly due to an electrical issue. The cause of Saturday’s fire has not yet been confirmed.

But the president took to Twitter last night to discuss the fire, saying that it was well-contained, and that the building is “well built.”

Fire at Trump Tower is out. Very confined (well built building). Firemen (and women) did a great job. THANK YOU!

He failed to mention, however, that the residential floors of the building—which also contains Trump’s home and the offices of the Trump Organization—lack sprinklers. That’s in part thanks to Trump himself, who in the late 1990s lobbied against legislation that would have required him to install sprinklers in Trump Tower.

The New York Times reported that Trump was among the city’s developers who lobbied against a 1999 sprinkler ordinance proposed in response to two major fires in New York high-rises that together killed seven people, including three firefighters. The bill required that buildings containing four or more apartments install sprinklers in every common hallway and in each unit. Trump, the Times reported, called city officials in New York to argue that the sprinkler systems were too expensive—costing up to $4 per square foot and potentially thousands per apartment.

After the bill’s passage, Trump reversed course, saying he had come to support the law because sprinklers make tenants feel safer, and boasting that he would be spending $3 million to install sprinklers in units at Trump World Tower, a 72-story high-rise Trump had begun constructing just before the law’s passage. But Trump’s change of heart came only after the legislation was revised to include a grandfathering provision that allowed pre-1999 buildings to forgo the sprinkler requirements unless they underwent a major renovation.

At a Saturday press conference, the New York fire department’s commissioner Daniel Nigro, said that when Trump’s family is at Trump tower, extra fire protection is maintained. He also said that there was significant smoke damage sustained to the upper floors during Saturday’s fire. Several residents of the towers told the New York Times on Sunday that they received no orders from the building after the fire began. “When I saw the television, I thought we were finished,” said 76-year-old Lalitha Masson told the Times, adding that she called her oldest soon to say goodbye.

Another resident, Dennis Shields, told the Times that “You could smell the smoke and you could hear things falling like through the vents. It just smelled like sulfur.” Shields also said that although there were no orders to evacuate, he received a personal text message from Trump attorney Michael Cohen, whom Shields grew up with. “He said, ‘You better get out ASAP.’ That’s how I knew to get out,” Shields recalled. “Otherwise I’d still be in there.”