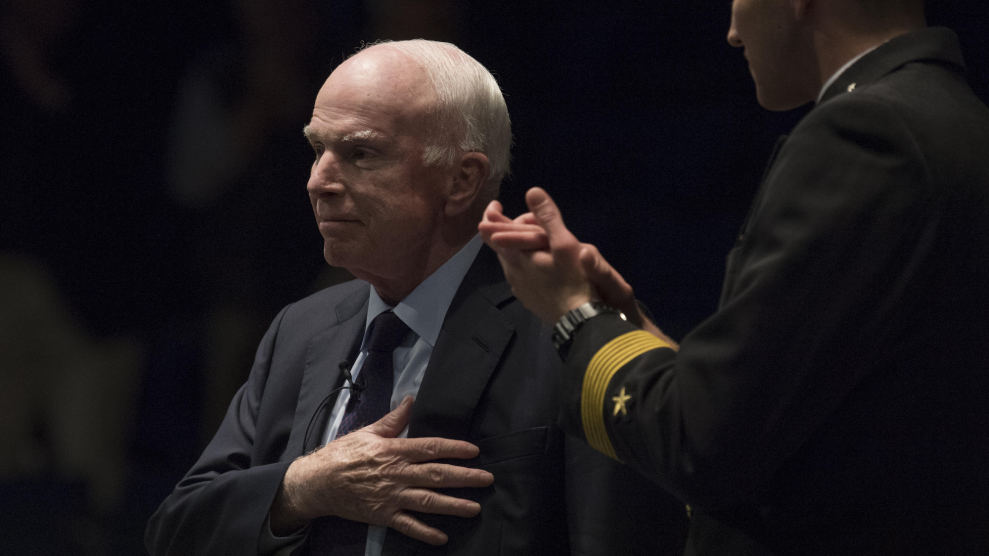 The White House is under fire after a shocking report Thursday afternoon revealed that an aide to the president mocked Sen. John McCain, who is battling an incurable brain cancer, suggesting in front of staff members this week that the Arizona senator is irrelevant because he is “dying anyway.”

The incident, first reported in the Hill and confirmed by multiple sources who were in the room, follows McCain’s announcement this week that he will not support President Donald Trump’s nominee for CIA director, Gina Haspel, because of her refusal to condemn torture practices as immoral. The White House has not refuted the comments made by aide Kelly Sadler; it instead issued a statement Thursday saying that it respected McCain’s service.

But while the White House fails to condemn Sadler—she remains in her role as special assistant to the president—lawmakers on both sides of the aisle, members of McCain’s family, and past administration officials have joined to rally around McCain.

“The thing that surprises me the most is…I don’t understand what kind of environment you’re working in when that would be acceptable and then you can come to work the next day and still have a job,” Meghan McCain said on The View Friday morning, prompting applause from the audience. “And that’s all I have to say about that.”

Our nation should be grateful for the exemplary service and sacrifice of @SenJohnMcCain, and treat this war hero and his family with the civility and respect they deserve.

There are no words. https://t.co/N6RF4kyHLo

Former Vice President Joe Biden went one step further Friday, slamming the remarks as a “rock bottom” moment for the Trump administration. “People have wondered when decency would hit rock bottom with this administration,” Biden said in a statement Friday. “It was yesterday.” He added, “John McCain is a genuine hero—a man of valor whose sacrifices for his country are immeasurable. As he fights for his life, he deserves better—so much better.”

McCain has been one of Trump’s most vocal critics—condemning the president’s overall character, his “America first” principles, and his coziness with Russian President Vladimir Putin. During the 2016 presidential campaign, Trump suggested that McCain was not a war hero because he was captured in Vietnam.

The New York Times reported last week that McCain has informed the White House that he does not want Trump at his funeral.