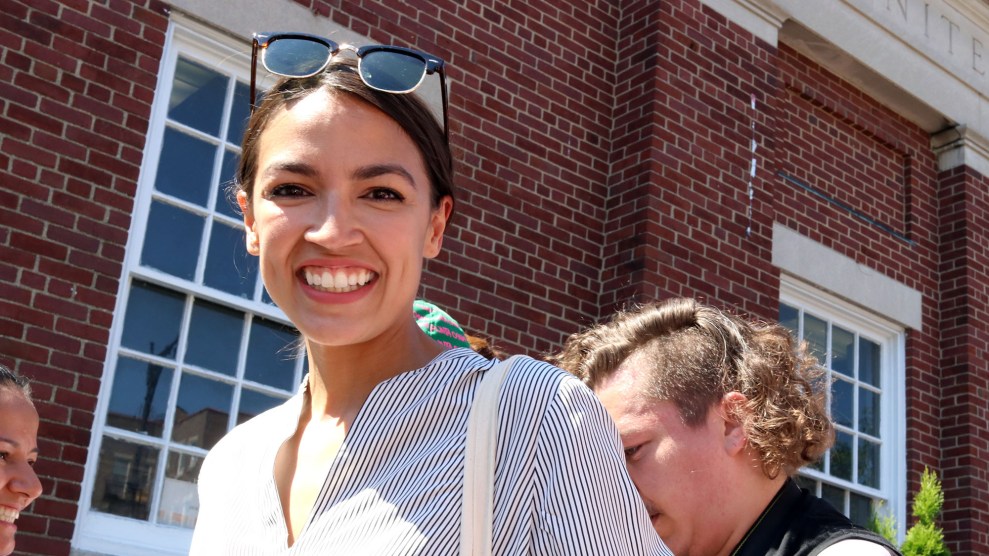 Alexandria Ocasio-Cortez, democratic primary winner who defeated powerful US Congressman Joe Crowley (D-NY) in the New York democratic primary on 26th. June, 2018 was a crowd favorite at the #FamiliesBelongTogether rally and march. The End Family Separation NYC Rally and March is one of several similar #FamiliesBelongTogether protest events taking place across the U.S. this weekend, 30th. June, 2018. This Queens, New York march and rally, took place in the most ethnically diverse neighborhood of the city in Jackson Heights and drew hundreds of passionate activist and protesters. (Credit Image: © G. Ronald Lopez/ZUMA Wire)G. Ronald Lopez/Zuma

The Democratic Party just had its Eric Cantor moment. In Tuesday’s New York Democratic primary, Alexandria Ocasio-Cortez, a 28-year-old former Bernie Sanders organizer, knocked off incumbent Rep. Joe Crowley—the chairman of the House Democratic Caucus. Crowley was considered by many to be second in line to be speaker of the House if Democrats capture the chamber in the November elections.

Crowley, who is chairman of the Queens Democratic Party, had never faced a serious primary challenge in any of his 10 previous elections. But Ocasio-Cortez picked up steam in the 14th Congressional District by channeling progressive dissatisfaction with New York’s Democratic establishment. She tied Crowley (not unfairly) to Wall Street and real estate interests and argued that it was time for the overwhelmingly nonwhite district to be represented by someone like her, a Puerto Rican from the Bronx. That was a theme of her viral campaign ad:

Although Crowley was a reliable progressive vote in Congress, Ocasio-Cortez offered a platform that was substantially to the left. A member of the Democratic Socialists of America, she was one of the first congressional candidates to call for the abolition of the federal Immigration and Customs Enforcement agency, better known as ICE. With her victory, Ocasio-Cortez is all but assured of becoming the youngest woman ever elected to the House, and she becomes the first Democratic primary challenger to knock off an incumbent member of Congress this year.

Challenger @Ocasio2018 toppled one of the top Democrats in Congress, @repjoecrowley, Tuesday night in their primary in the 14th District. The victory stunned even her, live on our channel. #NY1Politics https://t.co/fnK1O0bacz pic.twitter.com/RjuqHJpn1p