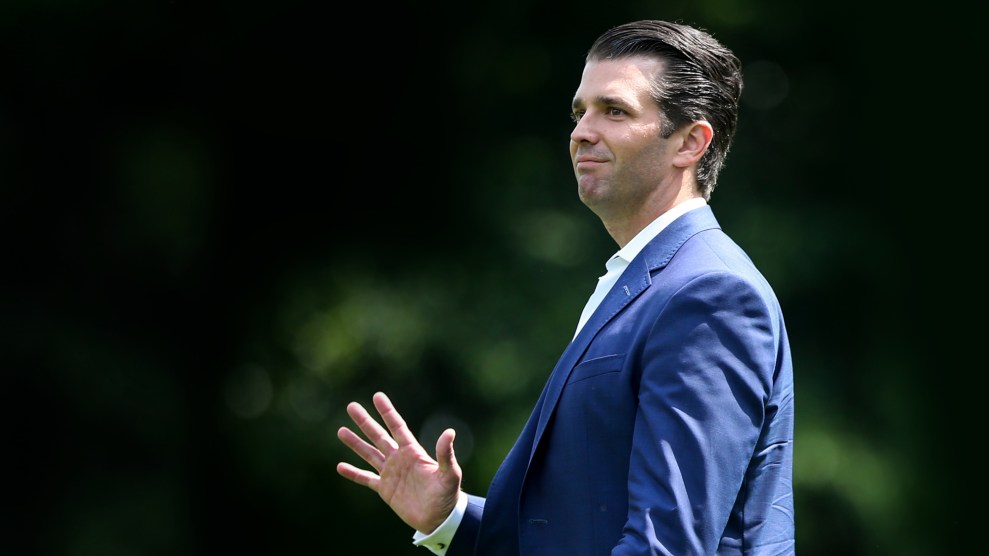 On Saturday afternoon, the New York Times revealed a 20-page private letter that President Donald Trump’s lawyers had sent special counsel Robert Mueller in January in which they contended that it was impossible for Trump to commit obstruction of justice because he, as president, has authority over all federal investigations and the power to do whatever he wants with them. The letter is a brazen declaration of executive power, and legal experts immediately challenged its premises and assertions. The missive also raised a possible problem for Donald Trump Jr.: It suggested he had not told Congress the whole truth—and might have even misled the body—regarding the cover story he put out when it was revealed that during the campaign he, Jared Kushner, and Paul Manafort had met with a Russian emissary after being told she would share with them dirt on Hillary Clinton, as part of a Kremlin operation to help Trump.

At issue is the statement that Trump Jr. released, when news broke last July of that June 9, 2016, meeting in Trump Tower between the senior Trump advisers and Natalia Veselnitskaya, the Russian lawyer supposedly dispatched by a Kremlin official. Trump Jr.’s first statement claimed the meeting had been about Russian adoption policy. (American adoptions of Russian children had been curtailed by Moscow in response to the implementation of the Magnitsky Act, which imposed sanctions on Russian officials suspected of human rights abuses.) That statement did not mention that the meeting had been set up by the Trump campaign in the expectation it would receive from Moscow negative information on Clinton. And Mueller’s investigation has been looking at the elder Trump’s involvement in concocting that cover story. Earlier this year, the Times reported that Trump had supervised the writing of the statement and had insisted that it claim that the meeting only was about Russian adoptions.

This is the first time Trump and his lawyers have conceded that he is responsible for this statement.

The letter from Trump’s lawyers goes further than the Times’s account—and confirms an earlier Washington Post report pegging Trump as the author of the statement. It states, “The President dictated a short but accurate response to the New York Times article on behalf of his son, Donald Trump, Jr.” Dictated—that means Trump devised that misleading statement. This is the first time Trump and his lawyers have conceded that he is responsible for the statement. The Times notes that previously “Trump’s advisers have tried to muddy this point, suggesting several people were involved, so the clarity of the sentence is striking.”

The sentence is also striking in that it undercuts the veracity of Trump Jr.’s testimony to Congress.

On September 7, Trump Jr. was questioned in a private session by the Senate Judiciary Committee about the Trump Tower meeting, and he was asked about the origins of the statement he put out when the meeting was revealed. First, the statement was read to Trump Jr.:

On July 8th of this year you issued a statement about the meeting: “It was a short introductory meeting. I asked Jared and Paul to stop by. We primarily discussed a program about the adoption of Russian children that was active and popular with American families years ago and was since ended by the Russian government, but it was not a campaign issue at the time and there was no follow–up. I was asked to attend the meeting by an acquaintance but was not told the name of the person I would be meeting with beforehand.”

Then Trump Jr., according to the transcript, which was recently released, was asked about the Washington Post story noting that his father had actually drafted that statement. This exchange ensued:

Q. The Washington Post has since reported that your father was involved in drafting your July 8th statement. Is that correct?

A. I don’t know. I never spoke to my father about it.

Q. Do you know who did draft that statement?

A. Well, there were numerous statements drafted with counsel and other people were involved and, you know, opined.

Q. To the best of your knowledge, did the President provide any edits to the statement or other input

A. He may have commented through Hope Hicks.

Q. And do you know if his comments provided through Hope Hicks were incorporated into the final statement?

A. I believe some may have been, but this was an effort through lots of people, mostly counsel.

Q. Did you ask him to provide any assistance with the statement?

A. No. She asked if I wanted to actually speak to him, and I chose not to because I didn’t want to bring him into something that he had nothing to do with.

Trump Jr. certainly did not inform the committee that his father had dictated the statement. In fact, he made it seem as if Trump was marginally involved, if at all. Yet according to the letter written by Trump’s own lawyers, Trump was in charge of the statement.

Trump Jr.’s remarks to the committee conveyed an inaccurate impression and can be seen as an attempt to provide cover for his pop. They might even be considered false statements. By the way, it’s a crime to lie to Congress.

At least one member of Congress has tagged the letter from Trump lawyers as bad news for Trump Jr. On Saturday afternoon, Rep. Joaquin Castro (D-Texas), a member of the House Intelligence Committee, tweeted, “Donald Trump is lying or Donald Trump, Jr. lied during the House Intel investigation.”

Castro was referring to Trump Jr.’s testimony before his committee, not the Senate Judiciary Committee. This testimony has not been made public, but the tweet suggests that Trump Jr. took a similar line when he spoke to the House committee and distanced his father from the misleading statement about the Trump Tower meeting.

Now the question is will either committee, both led by Republicans, give a damn and examine whether Trump Jr. tried to stonewall them.