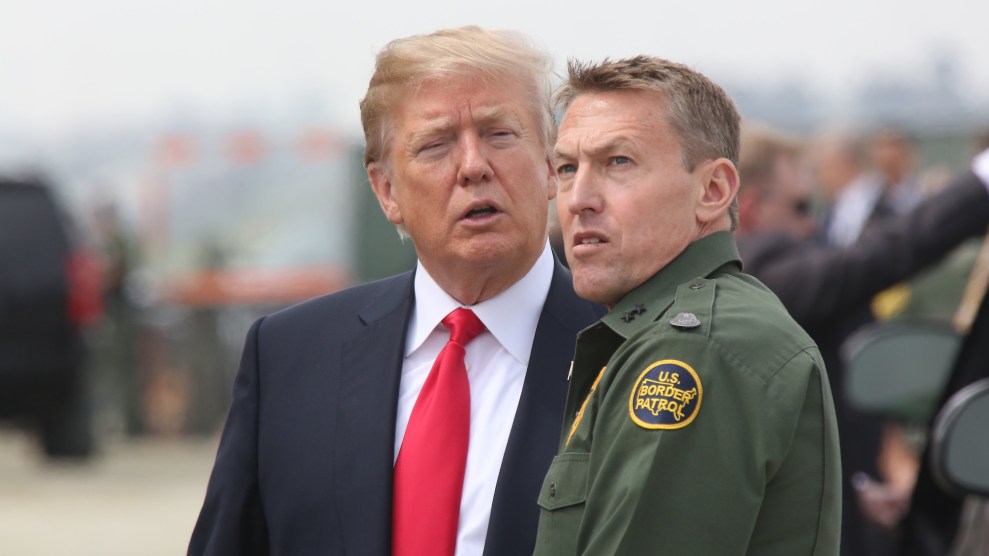 Finishing a job application on your own is usually a prerequisite for getting hired. US Customs and Border Protections wants to change that. The agency is having so much trouble hiring enough border agents that it’s now spending huge sums—potentially hundreds of millions of dollars—to recruit applicants and help them complete the application process.

New federal contracting documents show that the agency plans to give applicants “one-on-one” encouragement to make sure they don’t get “stuck” in the hiring process. That will include helping them schedule their physical fitness tests and medical exams, as well providing them with “helpful information” about their entrance exams.

Last November, CBP awarded a five-year, $297 million contract with Accenture Federal Services, a subsidiary of the global consulting company Accenture. That comes to nearly $40,000 for each of the 7,500 workers Accenture is supposed to help recruit and hire. The per-hire cost exceeds the base salary of many CBP officers. (The contract could be terminated before the five years are up; so far, CBP, a division of the Department of Homeland Security, has committed only to paying $42.7 million for the first year.)

Now CBP is proposing to expand the contract by up to an additional $8 million over five years so that Accenture can help replace employees CBP is losing through attrition, in addition to recruiting the 7,500 “surge” applicants. The surge includes 5,000 Border Patrol agents who work between border crossings and 2,000 CBP officers who work at official ports of entry. CBP’s hiring push follows a January 2017 executive order from President Donald Trump that called for adding 5,000 Border Patrol agents.

But it is still not clear that CBP will be able to hire them, because Congress has refused to provide the funding. A congressional budget document from March stated that hiring more Border Patrol agents was “not supported by any analysis of workload and capability gaps across CBP.” And DHS’s own inspector general found last year that CBP had failed to justify why it needs more agents.

CBP is struggling to meet the staffing levels set by Congress before Trump took office. There were 19,346 Border Patrol agents in March, which was about 300 fewer agents than in January 2017 and more than 2,000 short of the 21,370 mandated by Congress during the Obama administration. CBP would need more than 1,100 additional officers to meet the level approved by Congress, according to a December report from Democrats on the Senate Homeland Security Committee.

The agency’s morale last year ranked 315th out of the 339 federal offices tracked by the nonpartisan Partnership for Public Service. Attrition remains a major problem at CBP, and the congressional budget document noted that the agency expects to lose more Border Patrol agents this year than it hires, marking at least the sixth year in a row that this has been the case.

What Accenture would actually be paid to do was unclear when it won the $297 million contract. CBP’s solicitation requested help “managing the full life cycle of the hiring process” for entry-level Border Patrol agents and creating a system to track that process. Alex Nowrasteh, a senior immigration policy analyst at the libertarian Cato Institute, says the Border Patrol has serious issues finding qualified applicants and that the extra money won’t result in many new hires. “One of the many upsides of a tight labor market is that makes it harder for Border Patrol to expand,” he notes in an email.

The new proposal, which was posted on the government’s Federal Business Opportunities website earlier this month, shows that a major part of Accenture’s work is essentially very expensive hand-holding for applicants. The funding request calls for providing all CBP applicants with the “end-to-end” assistance that Accenture is already using to recruit the 7,500 surge hires. The justification for awarding Accenture the new $8 million contract states that CBP’s lengthy application process creates the “significant risk that qualified applicants will lose interest and withdraw.” CBP believes it needs to provide robust care at every step of the hiring process to prevent people from giving up on their applications.

The agency’s morale last year ranked 315th out of the 339 federal offices tracked by the nonpartisan Partnership for Public Service.

Specifically, CBP will remind applicants to take their entrance exam, help them schedule it, and provide them with unspecified “helpful information” about the test, which about half of applicants fail. Accenture will then help them schedule medical exams and fitness tests. CBP says applicants also need encouragement to complete job interviews and polygraph and drug tests. The “one-on-one encouragement and guidance” will include texts, calls, and emails. The agency says its applicants will “loose (sic) interest” and seek higher-paying jobs without such a hands-on approach. A CBP spokesperson, who requested anonymity, says Accenture’s work will help applicants complete tasks “in a timely manner” and “should speed up the time to hire” them.

A former Department of Homeland Security official says, “In the long run, it’s a pricey but not crazy deal.” The official says it makes sense to assist applicants, particularly because CBP will need to attract far more than 7,500 applicants to fill the potential openings. “If 10 percent of the people don’t respond quickly, or they don’t respond at all…all of a sudden you’re talking about thousands of them,” the officials adds. “And then your ability to get things done diminishes pretty rapidly.”

CBP Commissioner Kevin McAleenan painted a grim picture of his agency’s hiring challenges in a memo last year. He noted that CBP had lost nearly 400 Border Patrol agents per year between 2013 and 2016 as it struggled to compete with other law enforcement agencies. One of the major challenges is that Border Patrol agents have to work in remote locations, unlike US Immigration and Customs Enforcement officers who work in and around major cities. McAleenan also said ICE had an advantage over CBP because it does not require applicants to take a polygraph test. The Associated Press reported last year that two-thirds of CBP applicants fail the test, more than twice the rate at eight law enforcement agencies across the country from which the AP obtained records.

The solicitation that Accenture won last year was designed to help CBP meet the hiring goals set by Trump’s executive order. But after the inspector general concluded that CBP had failed to justify the need for the additional capacity, a DHS spokesman said hiring the additional agents was only a “goal.”

Applicants will be reminded to take their entrance exam, provided with “helpful information” about the test, and assisted in scheduling medical exams and fitness tests.

DHS’s 2018 budget request asked for funds to hire 500 new Border Patrol agents. Congress provided funding for 328 CBP officers in March, but it rejected the request for more Border Patrol agents. Asked how the lack of congressional funding affects CBP’s work with Accenture, the CBP spokesperson said the company’s contract was “funded in FY18 using funds appropriated by Congress, and the President’s FY19 Budget Request includes funds to hire an additional 750 Border Patrol Agents.” There are no guarantees that Congress will provide the funds for those 750 agents.

Sen. Claire McCaskill (D-Mo.), the top Democrat on the Homeland Security Committee, asked McAleenan earlier this year why the agency was prioritizing hiring Border Patrol agents even though CBP needed about 3,600 more non-Border Patrol officers to adequately staff ports of entry. Anthony Reardon, the head of the National Treasury Employees Union, which represents CBP officers but not Border Patrol agents, told Congress in January that the Accenture money would be better spent hiring CBP employees. Reardon tells Mother Jones that the original contract and $8 million expansion could be used to hire more than 1,500 new CBP officers. The Washington Post reported earlier this year that CBP is so short-staffed that it is sending officers from airports to work along the US-Mexico border on an emergency basis.

ICE put out a bid for similar recruiting services in January to help hire the 10,000 officers Trump requested in another executive order. Congress did not authorize the funding for those officers, and ICE canceled the solicitation in late May.

Nowrasteh, the Cato Institute analyst, worries that CBP applicants who need repeated encouragement to apply won’t be the best employees. “Virtually all applicants who start an application and refuse to finish either realize that they are unqualified or uninterested,” he says. “They shouldn’t be working in law enforcement.”

The former DHS official says that applying for jobs at CBP and other agencies that require federal background checks is a “miserable process,” adding that applicants for entry-level positions often aren’t familiar with the complex government applications. “I actually think getting hand-holders, if you’ve got the money to pay them, is a good idea,” the official says. “I never worked in a job where I had enough money to pay people like that, but for that type of hiring it’s actually not a bad idea.”