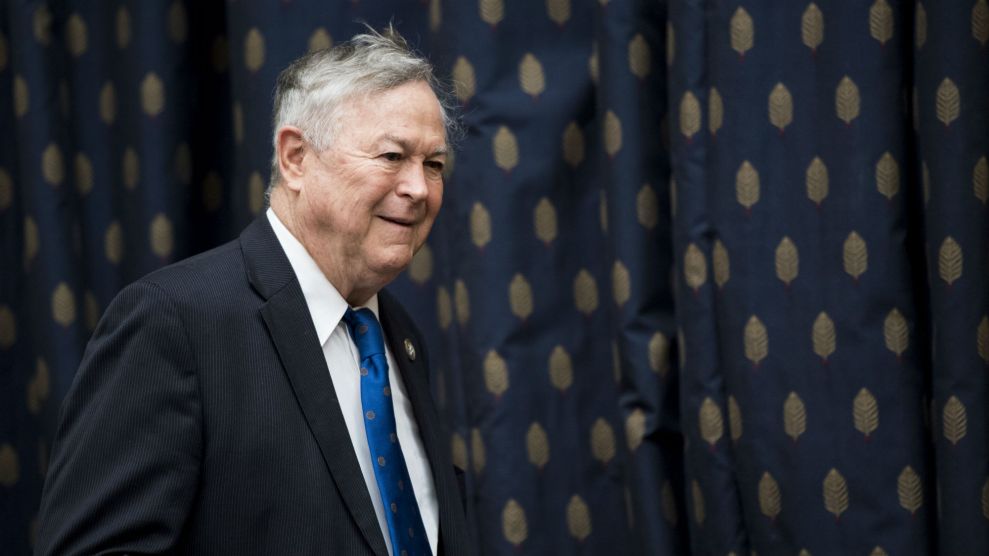 Rep. Dana Rohrabacher just can’t seem to stop popping up on the fringes of the Trump-Russia scandal, and it could very well help end his decades-long political career. In the run-up to Tuesday’s primary election in California’s 48th Congressional District, Rohrabacher’s opponents—both Democrats and Republicans—have repeatedly raised the 15-term congressman’s famously cozy relationship with the Kremlin.

“Vladimir Putin has been called a murderer and a thug,” declares another. “Dana Rohrabacher is being investigated for conspiring with him.”

“You don’t have a lot of candidates speaking with such admiration about Putin the way that Rohrabacher has.”

Last November, news reports revealed that special counsel Robert Mueller’s team was looking into Rohrabacher’s pre-election meeting with then-Trump campaign adviser Mike Flynn. That same month, news emerged that an email obtained by Senate investigators showed that Alexander Torshin, the deputy governor of the Russian central bank, had tried to set up a “backdoor” meeting between Donald Trump and Vladimir Putin during the campaign. There was no evidence that Rohrabacher was involved in this effort, but he is one of few US officials who over the years has repeatedly met with Torshin. (Torshin has long cultivated ties with the National Rifle Association and the American conservative movement.)

Soon, Rohrabacher was sitting for interviews with both the House and Senate intelligence committees, which were conducting their own Russian investigations. In February 2018, Rohrabacher’s name appeared again—this time in a document outlining former Trump campaign deputy chairman Rick Gates’ plea deal with Mueller. Gates, the filing noted, had lied to the FBI about a 2013 meeting between “a Member of Congress” and Paul Manafort, who had long done consulting work for a pro-Russia political party in Ukraine and who later served as Trump’s campaign manager. That member of Congress, news reports revealed, was Rohrabacher.

Rohrabacher’s public statements have also raised eyebrows. In an April 2017 interview, he called the investigation into Kremlin interference in the US election a “brouhaha about nothing,” saying that the only thing the Russians had done was disclose “accurate” information following their hacking of Democratic officials. He’s also defended Russia’s annexation of Crimea from Ukraine, saying in 2014: “There are many people who I worked with over the years who are still stuck in the Cold War. They cannot sit by and understand that Russia has its national interests, as we have our national interests. What do the people of Crimea want? I don’t think anybody in here will disagree with the fact that it is clear the people of Crimea would rather be part of Russia than be part of a pro-European or European-directed Ukraine.”

“You know he’s a tough guy and he’s supposed to be a tough guy, that’s what the Russian people want,” Rohrabacher said of Russian president Vladimir Putin in a 2013 radio interview. “But that’s no reason why we shouldn’t try to work with him.”

Now, Rohrabacher’s Russia ties are playing a starring role in one of America’s most closely watched electoral contest. His district, which Hillary Clinton won in 2016, is a prime Democratic target in the party’s efforts to take over control of the House of Representatives. Rohrabacher’s record presents a political opportunity at a moment when distrust of Russia may be the highest it’s been since the Cold War.

“You don’t have a lot of candidates speaking with such admiration about Putin the way that Rohrabacher has,” says Kyle Kondik of the University of Virginia Center for Politics. “The Russia stuff is more prominent given the Mueller investigation, but I don’t think you’d be seeing this if it weren’t for Rohrabacher’s history with Russia.”

Rohrabacher wasn’t always such a loyal friend of Moscow. In the 1980s, when he was just starting out in Congress, he signed up to fight for a week with a unit of the anti-communist Afghan mujahideen who were battling against the Soviets. But as communism collapsed in the USSR and Russia began to work towards democracy, Rohrabacher supported the new government. And over the years, his friendliness towards Russia grew. Sometime in the 1990s, Rohrabacher, by his own admission, lost a drunken arm-wrestling match at a Washington, DC, bar to Putin, who at the time was an budding Russian politician. Soon Rohrabacher was advocating in Congress that the US space program save money by purchasing rockets made by the former USSR and hosting Russian delegations in his district, home to several aerospace companies. After war erupted between Russia and the nation of Georgia in August 2008, Rohrabacher broke with the Bush administration and came to Russia’s defense, saying that Georgia was to blame for starting the war. Russian officials and the state press trumpeted his comments.

In 2012, the FBI warned Rohrabacher that Russian spies were trying to recruit him as an asset. Two years later, Rohrabacher voted against tougher sanctions on Russia following its annexation of Crimea. In 2016, on a trip to Moscow at the height of the US presidential campaign, the congressman accepted a confidential memo, prepared by Russia’s general prosecutor’s office, containing allegations of financial fraud by Democratic donors. Two months later, Kremlin-linked lawyer Natalia Veselnitskaya—who had also met with Rohrabacher during his trip to Moscow—brought the same allegations to a secret Trump Tower meeting with Trump campaign officials.

About that time, House Majority Leader Kevin McCarthy, a fellow California Republican, was recorded during a private conversation with GOP leaders making what he would later call a joke: “There’s two people I think Putin pays: Rohrabacher and Trump.” This conversation occurred after a meeting McCarthy and House Speaker Paul Ryan had with the Ukrainian prime minister in which they discussed the Kremlin’s efforts to finance politicians who oppose democracies in Eastern Europe. In response to the recording, a Rohrabacher spokesperson told the Washington Post that Rohrabacher supports “working closer with the Russians to combat radical Islamism. The congressman doesn’t need to be paid to come to such a necessary conclusion.”

All this history presents what Kondik calls “a potential political weapon” in a district that includes wealthy enclaves like including Newport Beach and was once “bedrock Republican territory” but has gradually been turning more blue.

As a result, seven Democrats have entered the race to try to topple Rohrabacher. And money has flowed into the campaign at historic levels. Former California Sen. Barbara Boxer’s (D) PAC ran an ad last December titled “From Russia With Love,” labeling the congressman “Putin’s guy, not ours.”

Businessman Harley Rouda—who is backed in the primary by the Democratic Congressional Campaign Committee, the party organization in charge of supporting Democratic House candidates—has also been at it for months. “It’s time for a leader who represents us, not Russia,” Rouda said in a January ad that accused Rohrabacher and Trump of “siding” with Putin. Rouda has taken to referring to Rohrabacher as “Putin’s favorite congressman.”

Another Democratic challenger, Hans Keirstead, said in said in November that “it’s clear that Representative Rohrabacher thinks the district boundaries of the 48th extend to the Kremlin.”

Under the state’s jungle primary system, all candidates compete in a single primary, and the top two finishers move on to the November general election—regardless of party. With so many Democrats splitting the liberal vote, there’s a chance that Democrats could be shut out of the general election entirely, leaving voters to choose between two Republicans: Rohrabacher and his main GOP challenger, former state legislator Scott Baugh, who joined the race shortly before the March filing deadline.

That has presented a conundrum for Democrats. Attacking Rohrabacher before the primary risked driving Republican voters into the Baugh camp, raising the chances of an all-GOP general election. Despite the danger, Democrats haven’t shied away from the Russia issue. Just last month, another Rouda campaign video hit Rohrabacher on his Russia ties, this time by staging a mock debate moderated by Seinfeld actor Jason Alexander. Alexander introduced Rohrabacher—that is, archival footage of him—as “joining us via secure server from Moscow.”

Baugh, for his part, has been happy to join in. He released an ad in April that highlighted Rohrabacher’s many trips to Russia on the taxpayer’s dime.

Rohrabacher’s other GOP rivals have also hammered his Kremlin relationship. Long-shot candidate Paul Martin has made it central to his campaign. In March, he attended “Putincon,” a conference of anti-Putin activists in New York organized by chess-champion-turned-Putin-foe Garry Kasparov. Days after the conference, Martin vowed in a press release to hold five “Putin events” to better inform constituents in his district about “Vladimir Putin and his close relationship to beleaguered Congressman Dana Rohrabacher.” He added, “Speaking-out about Putin-Rohrabacher is an issue of national security that I will not ignore.” Another Republican candidate, Stelian Onufrei, has also homed in on the issue, telling NPR that Rohrabacher “is advocating a relationship with Russia that I think is dangerous for United States.”

Some think that the focus on Russia won’t sway voters. “No one gives a rip about Russia,” GOP pollster Justin Wallin told Buzzfeed last month. But others, including some Republicans, see the Russia focus as a potentially effective way to drag Rohrabacher down by tying him to Trump, who, polls show, is disliked by a majority of voters in the district.

Rohrabacher has insisted that his voters don’t mind his Russia ties.

Greg Blair, a spokesman for Rohrabacher’s campaign, told Mother Jones that the frequent travels to Russia that Rohrabacher’s opponents have harped on were simply part of his work as a senior member of the Foreign Affairs Committee and chairman of its Europe, Eurasia, and Emerging Threats subcommittee. “It is literally his job to travel and meet with people to talk about issues concerning the relationship between the US and Russia,” Blair wrote in an email. “While I’m sure this is a fun topic for cable news and liberal Twitter warriors, we’re focused on issues that voters care about, like cutting taxes, fighting illegal immigration and government bailouts, and protecting the quality of life for people in Orange County.”

Rohrabacher is still widely expected to amass enough support Tuesday to get on the general election ballot. But his share of the vote could provide some hints about whether the Russia investigation will be a potent issue in November—in the 48th district and around the country.

“Russia sort of lapsed as an issue ever since the Cold War, and now all of a sudden its more prominent, and it also dovetails with Rohrabacher facing probably the most significant challenge of his career,” says Kondik. “But is Russia a voting issue for people in the fall? We’ll have to wait and see.”