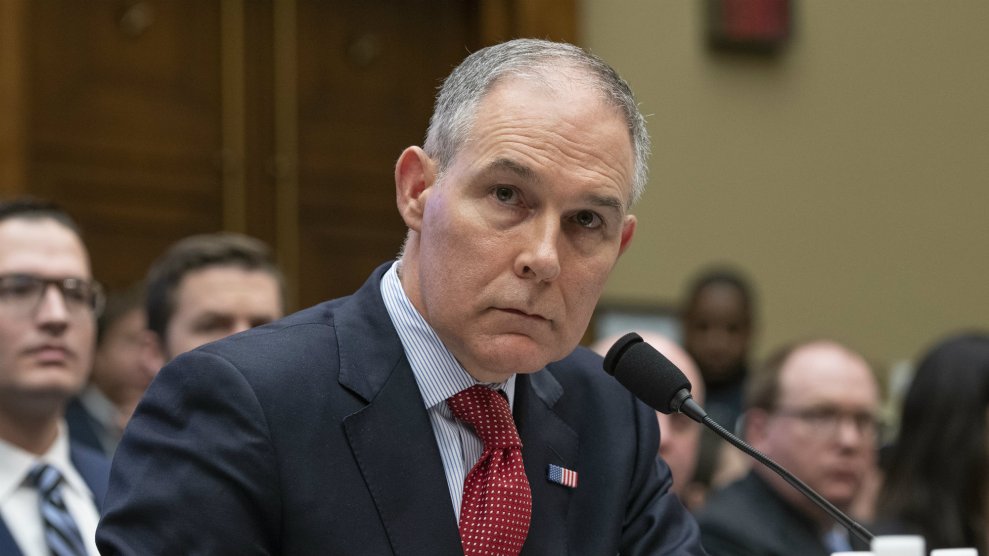 House Democrats are angry with EPA administrator Scott Pruitt again and, this time, it has nothing to do with first class flights, real estate deals, Trump hotel mattresses, moisturizing lotions, or any of his other ever-expanding list of controversies.

Lawmakers asked Pruitt in a letter released Wednesday to reconsider his decision to rescind a little-known rule regulating information about methane, a heat-trapping gas that is one of the primary contributors to global warming. Under the terms of an Obama-era rule, which mandates the documents and data a federal agency can request from private companies, EPA officials were set to receive updates from oil and gas companies on the levels of their methane emissions. That is, until Pruitt took over.

Almost immediately after he was confirmed at the EPA, Pruitt officially withdrew that request, which effectively permitted companies to shield their methane emission levels from the public. Nine attorneys general and two governors from major oil-producing states had written Pruitt a letter last year calling the rule an “onerous” result of Obama’s “climate agenda.”

Today’s letter, which was signed by House Natural Resources Committee Ranking Member Raúl M. Grijalva (D-Ariz.), and four other Democratic lawmakers, asserted that without these public disclosures, government regulators cannot “collect accurate data on methane emissions.” Their letter is another attempt by Democratic lawmakers to draw attention to the costly effect of Pruitt’s policies on the environment.

“Methane emissions exacerbate the worst impacts of climate change, result in significant air pollution … [and,] when occurring on public lands, deprive American taxpayers and states of a valuable source of royalty payments,” the letter reads.

Democrats received a boost this week with the release of a study in the journal Science that found methane emissions from the US oil and gas supply chain exceeded EPA estimates by 60 percent. The study was released on June 21 after five years of research and includes authors affiliated with Princeton, Harvard, Stanford and other academic institutions. Researchers suggested that recent EPA estimates undercounted the amount of emissions released during industrial malfunctions and other “abnormal operating conditions,” resulting in what the New York Times called a “leak problem” for the oil and gas industry. The Times noted:

Methane, the main component of natural gas, can warm the planet more than 80 times as much as the same amount of carbon dioxide over a 20-year period if it escapes into the atmosphere before being burned. A recent study found that natural gas power plants could actually be worse for climate change than coal plants if their leakage rate rose above 4 percent.

According to the EPA website, methane with its superior heat-trapping abilities compared to carbon dioxide, has less staying power in the atmosphere. But because it has a far greater ability to absorb energy, it is a much more potent short-term contributor to global warming when leaked into the atmosphere.

Whether the letter from House Democrats will make any difference is unlikely, but it may provide fodder for the August hearing Pruitt is scheduled to attend with senators from the Environment and Public Works Committee. Trump officials have been consistently in favor of relieving  businesses and corporations from the responsibility of meeting methane emission restriction standards.

In February, the Interior Department’s Bureau of Land Management moved to repeal a rule that had managed to survive in the Senate during the first year of the Trump administration. The regulation, which applies to drilling that occurs on public land, would have stopped companies from letting methane be leaked into the atmosphere. In a statement, the department’s assistant secretary for land and minerals management called it a “punitive regulation.” While the rule remains in place for now, subject to a potential suspension, aspects of it are tied up in litigation across half a dozen federal courts.