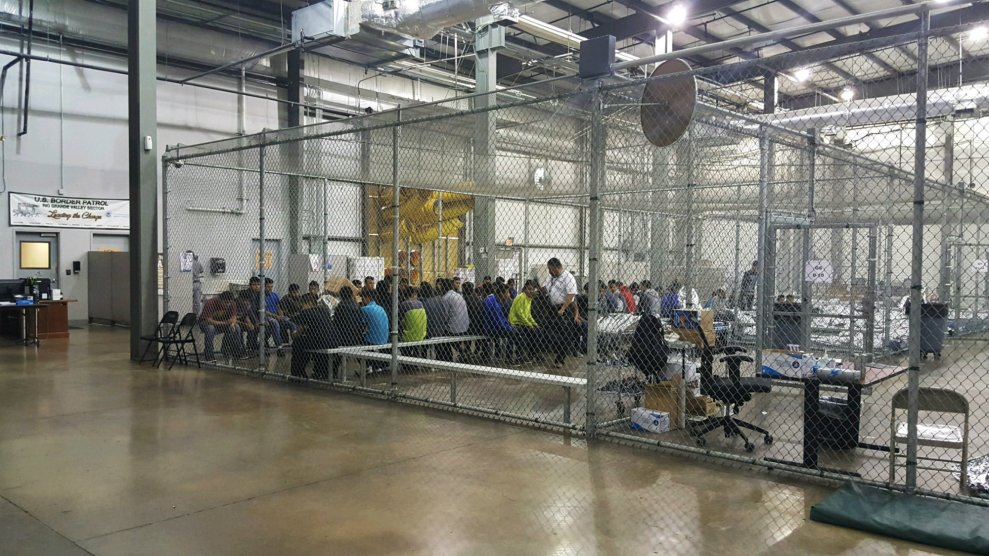 People who've been taken into custody after attempting to enter the United States illegally sit in one of the cages at a facility in McAllen, TexasU.S. Customs and Border Protection's Rio Grande Valley Sector via AP

During a White House briefing that followed days of wall-to-wall coverage of the Trump administration’s zero-tolerance policy at the border, the US Department of Homeland Security secretary denied claims that migrant children and their parents are being treated inhumanely at the border.

“Claiming these children and their parents are treated inhumanely is not true,” DHS Secretary Kirstjen Nielsen said Monday afternoon.

Nielsen’s unexpected appearance at the daily briefing capped days of harrowing coverage of the plight of at least 2,000 children who have been separated from their parents at the US border.

The White House delayed the briefing three times to allow for Nielsen, who attended the National Sheriffs’ Association meeting in New Orleans this morning, to answer questions.

The Trump administration’s zero-tolerance policy at the border has been the focus of several dispatches from Border Patrol facilities in Texas where hundreds of migrants—many of them children—are being kept in a “series of cages created by metal fencing.”

The crisis has centered primarily around a Trump administration policy to detain undocumented child migrants in facilities separate from their parents. Before the briefing, some reporters in attendance had been listening to audio obtained by ProPublica of 10 Central American child migrants reacting with grief and confusion after being separated from their parents at the border.

Nielsen said she had not heard the audio recording.

“It is not possible, as a matter of law, to detain and remove whole family units who arrive illegally in the United States,” she said during the briefing. “Congress and the courts created this problem and Congress alone can fix it.”

This statement is not accurate; DHS can release parents or families from detention at any time.

Trump administration officials have argued falsely in recent weeks that Democrats are responsible for the separation policy, in an apparent reference to Congress not passing an immigration bill that would close what the Trump administration calls loopholes that require family separation. As the president tweeted last week:

The Democrats are forcing the breakup of families at the Border with their horrible and cruel legislative agenda. Any Immigration Bill MUST HAVE full funding for the Wall, end Catch & Release, Visa Lottery and Chain, and go to Merit Based Immigration. Go for it! WIN!

Nielsen echoed these points during her prepared remarks. “This administration did not create a policy of separating families at the border,” she said, adding that adults are investigated at the border for links to human trafficking and to see if they are biologically related to the children they are accompanying.

“We have a statutory responsibility that we take seriously to protect alien children,” she said.