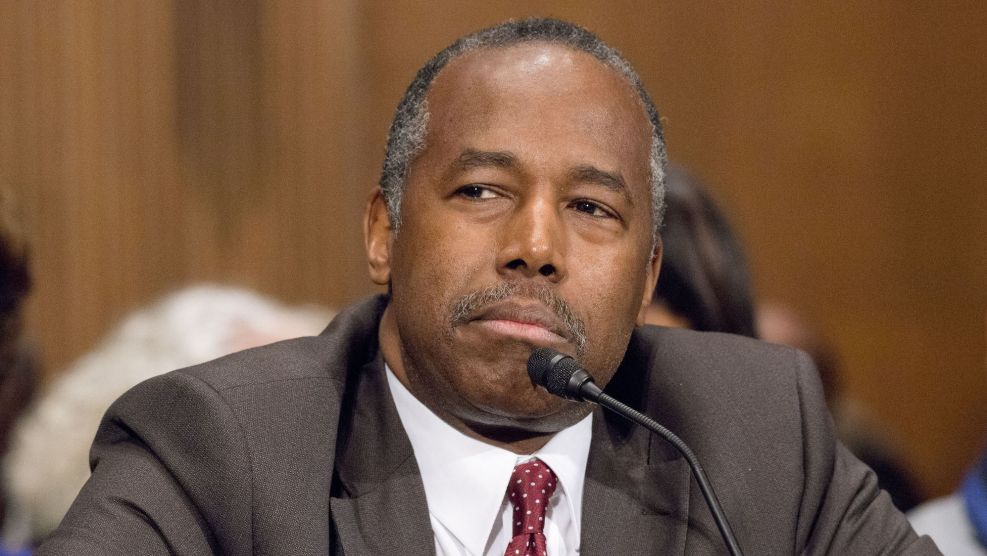 “You talk about your mom a lot, and I know you just lost her as well. I’m sorry for your loss,” Rep. Sean Duffy (R-Wisc.) said to Secretary of the Department of Housing and Urban Development Ben Carson during an oversight hearing on Wednesday. “But if you were acting uncivil, and you told your mother, ‘But mom, I’m acting uncivil because someone else was uncivil to me.’ What would she say to you?”

“She would say, your guide should be what is right,” Carson replied, “and not what other people do.”

References to civility were a recurring theme among House Republicans during the House Financial Services Committee hearing. Democrats attempted to focus on the elimination of fair housing protections recently proposed by Carson, continuing questions over the agency’s accountability in national lead standards for public housing, and challenges in home affordability nationwide despite an economy on the rebound.

In January, Carson suspended a 2015 HUD rule requiring state and local governments receiving HUD funding to assess and report fair housing barriers to the agency. One of the most outspoken opponents of this action has been Congresswoman Maxine Waters (D-Calif.), Ranking Member of the House Committee on Financial Services. Waters introduced a bill on Tuesday that would restore the Fair Housing Protections eliminated by HUD, a point that she briefly mentioned during Wednesday’s hearing.

Republicans used the hearing as an opportunity to attack Waters’ recent statements encouraging protests against Trump officials involved in family separation. Chairman Jeb Hensarling (R-Texas) began the hearing by calling on those who “daily promote diversity to respect diversity of opinion, which is the single most important form of diversity in a free and democratic society.” Referring to an incident last Friday when the owners of a Virginia restaurant asked White House Press Secretary Sarah Huckabee Sanders to leave, Hensarling lamented that now instead of being denied service for the color of your skin, you can be denied service for “the color of your voter registration.”

HUD’s dismantling of fair housing policies to combat racial discrimination and attempts to triple rents for lowest income recipients drove the concerns of committee Democrats at the hearing. Under Carson’s suggested policy changes, rent would triple for those paying minimum rents (from $50 to $150) and deductions for medical care costs and child care costs would be cut. Carson originally suggested the cutting rent assistance would help to expand the agency’s budget to other areas—at the same time he’s called for overall cuts.

Waters asked if a recent increase in HUD’s budget was the cause of Carson backtracking on the proposal. He replied that the budget was not the only concern, but that rent hikes for low-income people who live in subsidized housing “would give people more skin in the game and encourage them to bring in more income to their household.”

“The typical household affected by your proposal would be a single mother of two earning $2400 a year, or just $200 a month, and after paying $150 for rent she would be left with just $50 for the month for diapers, toiletries, bus fare, and other necessities,” said Waters. “Do you honestly believe that your proposal would help a family like this? How can you expect a child to succeed in school or a working parent to maintain employment when they are struggling to afford basic necessities?”

Carson told members of Congress that cuts would not impact the elderly, and only “relatively few people” pay minimum rent. He later clarified that the proposed rent hikes would impact about “10 percent” of the 4.7 million families who live in subsidized housing. Carson told Rep. Jim Himes (D-Conn.) that families subjected to rent increases are eligible for “waivers,” but did not specify how many families the waivers might involve. The proposal suggested by Carson would raise rent an average of 24 percent for most households receiving federal housing assistance, according to a report by the Center on Budget and Policy Priorities provided to the Associated Press.

Concerns also arose about two recent reports from the Office of the Inspector General and the Government Accountability Office, both citing HUD for a lack of “adequate oversight” in reporting and eliminating lead paint in public housing and rental housing using vouchers from HUD. Rep. Emanuel Cleaver (D- Mo.) asked if HUD has made any progress in updating its reporting standards and eradicating the problem of lead in public housing. Carson responded that the agency provides “tremendous oversight” and that lead levels are declining according to CDC reports.

But many Republicans continued to focus on other matters, especially Carson’s “compelling life story” of having grown up in public housing and rising above his humble origins. Hensarling asked how the agency planned to make sure sure that the HUD of today would produce similar stories of upward mobility. Carson recently announced that HUD would start rolling out “EnVision Centers,” support centers for HUD-assisted families in 17 cities around the country to help them achieve “sufficiency.” Hensarling wondered how HUD could show the improvement it has made to the lives of Americans. Carson assured him that he would provide “longitudinal” studies on the effectiveness of the agency. The studies would be available in “one to two years.”