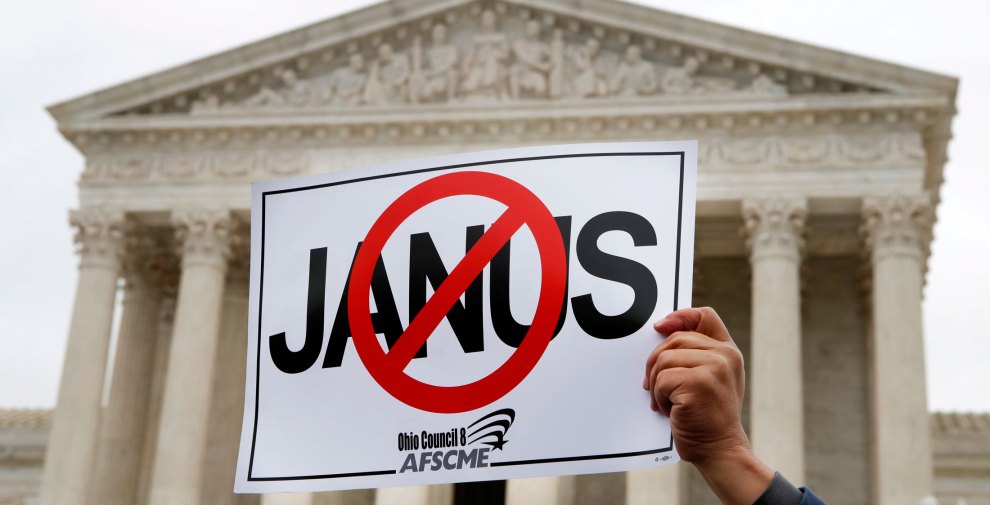 The Supreme Court’s Wednesday ruling that public-sector unions can no longer charge mandatory fees to non-union employees deals a significant blow to public-sector unions across the country. The decision in Janus v. American Federation of State, County, and Municipal Employees, Council 31 overturns a 1977 Supreme Court precedent that allowed unions to charge nonmembers fees for non-political activities.

Attorneys for Mark Janus, a state employee in Illinois, argued that the union’s activities he was mandated to pay for under state law were inherently political and that therefore he and other non-union government employees shouldn’t be compelled to pay for them. Experts say that eliminating such fees could allow members to opt out of the union, causing revenue from dues to fall and union membership to decline, given that nonmembers would still benefit from the union’s bargaining decisions.

Prior to the ruling, Mother Jones spoke to Charlotte Garden, an associate professor of law at Seattle University School of Law who filed an amicus brief on behalf of labor law scholars in the Janus case, about what the case means for the future of labor unions. This interview has been edited for length and clarity.

Mother Jones: What does it mean if the Supreme Court agrees with Janus’ argument?

Charlotte Garden: It’s going to mean that unions will have to spend more of their treasury dollars, more of the money that comes from union dues from people who voluntarily decide to become union members, on representing nonmembers. The risk is that represented workers will look around and say, “Hey, why am I the one paying for the union representation when some of my coworkers aren’t?” Those workers wouldn’t be saying, “I’m unhappy with my union representation.” They are just saying, “Look, I get this representation whether I’m paying or not, so why don’t I decide not to pay these fees?”

That’ll have a bunch of concrete consequences for union-represented workers, whose unions will have to push their treasury dollars further to provide representation, both during contract negotiations and during union representation. It will have consequences for workers who aren’t represented by a union, because when unions negotiate good contracts it tends to lift working standards for other employers as well.

And it’ll have consequences for Americans more generally. There’s strong economic evidence that a robust labor movement and high union density can lower income inequality. One reason in particular is unions’ abilities to advocate for public policy that helps workers. One consequence of spending more money that they received from members who join voluntarily on representing nonmembers will be fewer resources to put toward trying to fight for things like increasing the minimum wage and other activities.

MJ: You attended oral arguments. What was your impression of where the justices stood?

CG: What was completely clear was that Justice Kennedy was not the swing vote in this case. We tend to think of Justice Kennedy as the swing, but the questions he asked indicated a lot of hostility against public-sector unions. He is a clear vote for Janus in this case. Justice Thomas was silent, but we know he voted to take the position that Janus was advocating for in the previous iteration of this case, in the Friedrichs case. That leaves Justice Gorsuch. He didn’t ask questions, and he’s not on record in the Friedrichs case. So in a way, that makes him the swing justice. But the smart money is on him voting to overturn Abood, which is the old case that establishes the framework that exists now, and siding with Janus.

MJ: How did we get to this point where this case can effectively undermine public-sector unions?

CG: Anti-union groups have been planning for and litigating for this moment since the 1950s. The more recent explanation is that in 2012, in a case called Knox v. SEIU Local 1000, Justice Alito signaled he was open to very ambitious arguments from anti-union groups raising First Amendment arguments to protect union dissenters. So that opened the floodgates and led to the Friedrichs case and also Janus now and a slew of cases that are pending in the district courts and courts of appeals that are raising arguments that would go further than Janus or build on Janus.

MJ: What issues do those pending cases tackle that go beyond Janus?

CG: They raise the issue of whether it’s acceptable to have a default where represented workers pay union fees and require them to opt out because they don’t want to pay. There are challenges to whether unions can offer benefits only to their members. I would expect to see more of those cases.

MJ: Why is there this explosion of cases challenging unions?

CG: Conservative groups, anti-union groups, recognize that the public sector contains almost half of union members in the US, and chipping away at the ability of unions to represent public-sector workers is chipping away at the labor movement in the United States. Conservative groups care about that because of the role unions play in politics. Unions are major players, mostly on behalf of Democratic candidates, so people should think about Janus v. AFSCME in the same way they think about the voter registration case that came down the other day or the gerrymandering cases that have yet to come down. It’s really about the ability of working people to participate in politics through their unions.

MJ: What have unions been doing in preparation for Janus?

CG: A lot of what unions are doing is education, both of the unions they represent and the public more generally. They’re also thinking about how they might encourage blue states to respond to the decision in Janus. One argument that exists is that once unions can’t obligate workers to pay dues or fees that cover the cost of representation, unions should be able to make a First Amendment argument of their own, that they can’t be required to represent non-paying nonmembers anymore. I don’t think unions are going to say, “We want to stop representing non-paying nonmembers,” because a lot of unions see that as inconsistent with their reason for being.

MJ: What message would it send if the Supreme Court sides with Janus?

CG: If the Supreme Court sides with Janus, it would be the culmination of a series of cases that really make life much more difficult for unions and represented workers. It would be one in a line of cases signaling almost an unregulated, free-market approach to speech for everybody but the unions.