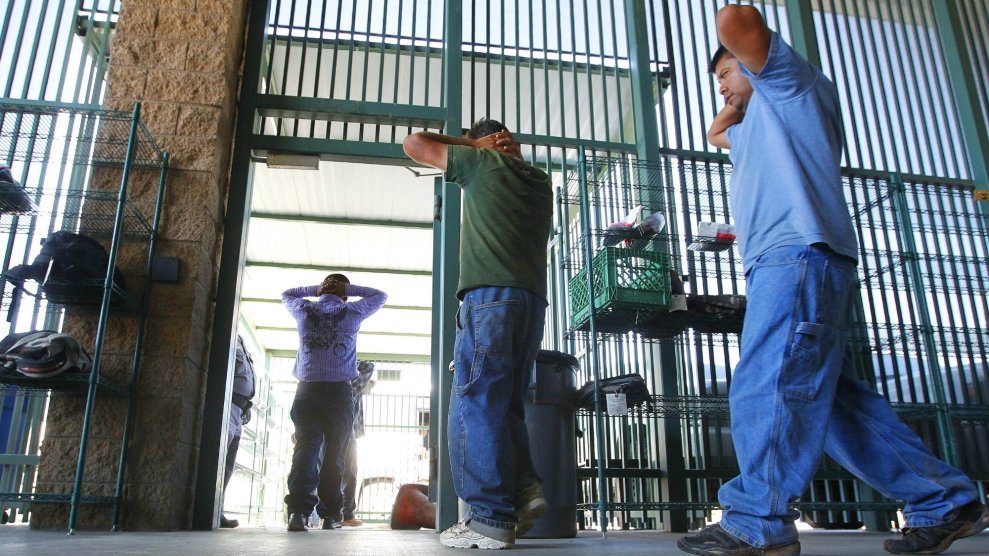 In an unexpected and unusual move, Immigration and Customs Enforcement says it plans to transfer 1,600 of its detainees to federal prisons. The agency says a surge in illegal border crossings and the Department of Justice’s new zero-tolerance policy has increased the demand for detention space.

In an email, ICE spokeswoman Danielle Bennett says the move is “intended to be a temporary measure until ICE can obtain additional long-term contracts for new detention facilities or until the surge in illegal border crossings subsides.” Detainees will be held in five federal prisons in California, Oregon, Texas, Washington, and Arizona.

Prison-guard union officials in California, Texas, and Washington told Reuters they had little time to prepare for the new inmates. One union president at a facility in Victorville, California, which will hold 1,000 detainees, has raised concerns about whether the prison has enough staff members to handle the new detainees. Immigration advocates have also criticized the decision. “Our federal prisons are set up to detain the worst of the worst. They should not be used for immigration purposes,” Ali Noorani, executive director of the National Immigration Forum, told Reuters.

Many of the detainees ICE is sending to prisons are waiting for immigration or asylum hearings and not facing criminal charges for illegal entry. To get a better understanding of why the Trump administration is sending them to prisons designed to hold criminals, I spoke with Margo Schlanger, a law professor at the University of Michigan and former head of the Department of Homeland Security’s Office for Civil Rights and Civil Liberties under the Obama administration. She suspects the move may have less to do with zero-tolerance policies and more to do with the surge of immigration cases as a result of ICE arrests inside the country.

Mother Jones: What is striking about this decision?

“Prisons are places for people who have been convicted. We are talking about noncriminal detainees.”

These are largely not dangerous people. Only about a third of them at this point have a criminal record, and often, they’re from years and years ago. So we’re not talking about a population that is appropriate for criminal confinement. In addition, it’s not illegal to fight your case: When you come and you apply for asylum, there’s nothing illegal about that. The idea that people in those circumstances need to be detained at all seems to me wrong. But certainly that they need to be detained in a prison that’s intended for criminal confinement—it’s just wrong.

MJ: Immigration detainees have been kept in local jails before. What makes keeping them in federal prisons different?

MS: When ICE detains people in local jails, it does so with a contract and a set of detention standards that are supposed to apply. Jails are often bad places for immigrants to be—they are very confined, and they can often have bad conditions. It’s even possible that federal prisons may have better conditions of confinement than some jails. That said, I would be very interested to know how immigrant detainees are or are not being separated from people in prison. I would be worried about staff that’s trained and used to dealing with criminal convicts being asked to deal with a civilly confined population—and if they’re able to make that transition. If [the Bureau of Prisons is] using its ordinary standards, those standards were designed for criminal confinement. In a prison, some of the rules and conditions probably serve punitive purposes, and if those rules and conditions are applied to immigrant detainees, that could violate the due process clause.

MJ: ICE attributes this decision to a surge in border crossings and its new zero-tolerance policy. What are some other factors at play?

“This is just part and parcel of the Trump administration’s effort to consider the immigration system entirely as a criminal justice system.”

MS: The impact of zero-tolerance is really unclear. The current government policy is to prosecute people who are crossing the border. If they are prosecuting them, then they are facing criminal trials and, if they’re found guilty, serving criminal time. If anything, that should lessen the need for ICE detention; they’re not in ICE custody at all, but they’re in DOJ custody. It’s possible in the future these people could come into ICE detention, but for now, that’s not driving the numbers.

MJ: What else should we be taking away from this decision?

MS: I think this is just part and parcel of the Trump administration’s effort to consider the immigration system entirely as a criminal justice system, which it is not and never has been. It’s bad enough that [immigrants] are in places that feel like jails and in some places are jails, but at least many people who go to jails haven’t been convicted of anything—you can think of it as a waiting place where they’re having their status adjudicated. But that’s not what prisons are. Prisons are places for people who have been convicted. We are talking about noncriminal detainees. It’s crossing an important symbolic bridge.