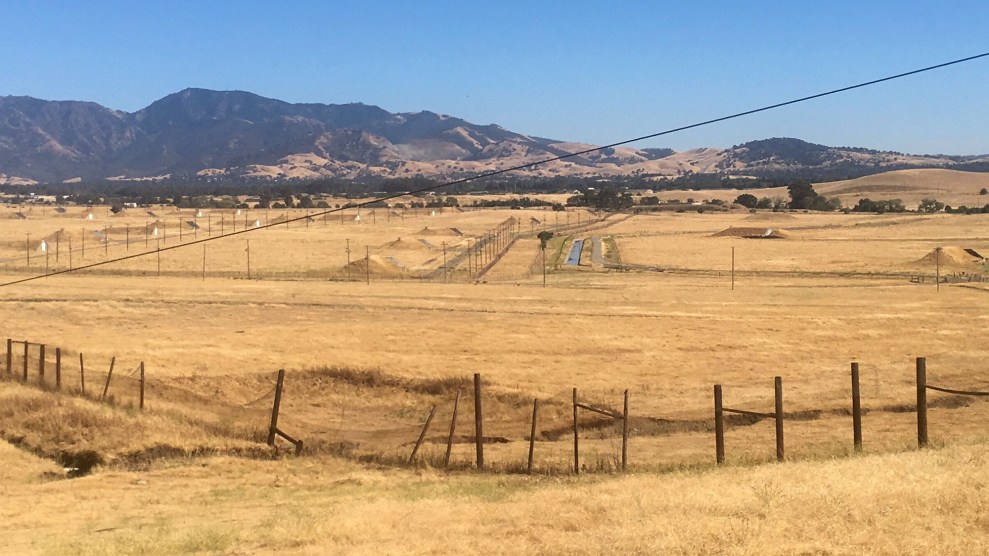 The Concord Naval Weapons Station land identified by the Navy as a site for a potential detention camp.Madison Pauly/Mother Jones

President Donald Trump’ family separation policy may be over for now, but his administration is still making plans to keep immigrant families crossing the border under lock and key—on military land if they have to. On Wednesday, Department of Defense officials announced that they have been asked by the Department of Homeland Security to get ready to hold up to 12,000 people in military facilities or temporary camps on Pentagon property, preferably in Arizona, California, New Mexico, or Texas. Two thousand migrant parents and children could be transferred to the first site, which has yet to be identified, by mid-August.

Federal officials from the Department of Health and Human Services were already evaluating Air Force and Army bases in Texas and Arkansas as potential locations to hold migrant children, including those who arrived at the border unaccompanied and those who had been separated from their families. Meanwhile, Navy officials were identifying sites that could be used hold DHS detainees, according to a leaked draft memoreported by Time. The memo identified several possible locations for migrant detention centers, including abandoned airfields in Alabama, which could hold up to 25,000 people in “temporary and austere” tents, as well as Camp Pendleton near San Diego and the Concord Naval Weapons Station near San Francisco, each of which was slated to hold up to 47,000 people.

It is not clear how much vetting any of these sites received. On Thursday, the Navy confirmed that it is no longer considering the Concord location, a 5,028-acre swath of rolling hills dotted with abandoned bunkers about 30 miles northeast of San Francisco. The inactive portion of the Concord Naval Weapons Station had been used to store ammunition and heavy explosives for decades before it was closed in 2007. Parts of the area are contaminated with chemicals like arsenic, lead, and mercury as well as unexploded ordnance, and it has remained a Superfund site while undergoing a major environmental cleanup. What’s more, the portion of the base that the Navy identified as a possible encampment location has “no useful infrastructure” for water, sewage, or electricity, according to a letter from Concord Mayor Edi Birsan to the secretary of the Navy.

The leaked Navy proposal quickly sparked a backlash in Concord. Rep. Mark Desaulnier (D-Calif.) called the plans “absolute madness.” Residents packed two city council meetings, urging local politicians to do everything in their power to stop a potential detention site in their backyard. Several compared the proposal to Japanese-American internment or German concentration camps. Outside the meeting, a troupe of Mexican Aztec dancers used drums and smoke to send prayers to President Trump “so that he knows we are human,” in the words of Concord resident Alejandra Macias.

At a small protest outside one of the meetings, a veteran named Steven Nall recalled growing up around the weapons station, where his father worked as a Navy cryptographer. “I’ve been looking at all these empty bunkers, all the empty fields, for decades, wondering, ‘When are they going to do something about this?'” When he learned of the plans to use the site for a detention camp, Nall says he was “appalled.”