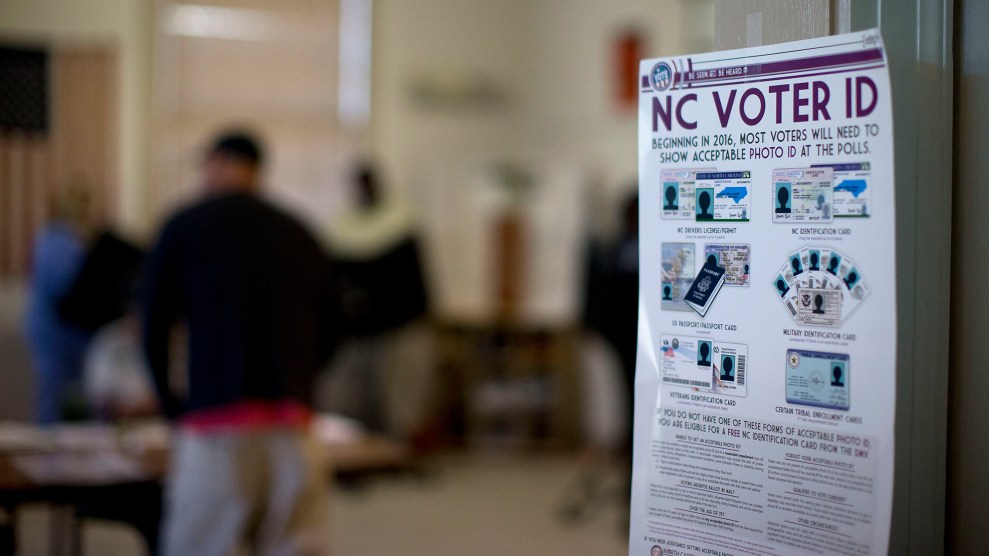 North Carolina Republicans are resurrecting their efforts to require voters to present specific forms of identification in order to cast a ballot, after an earlier voter ID law was struck down for discriminating against African Americans. This time, they’re trying to do it through a constitutional amendment.

On Thursday, Republicans in the legislature introduced a constitutional amendment that would require a photo ID to vote. It is expected to pass the legislature in the coming days and be placed on the ballot for voters’ approval in November.

Now North Carolina Republicans are asking voters to pass the same type of law. But given that the earlier law was struck down in federal court for violating the US Constitution, it’s not clear how an amendment to the state constitution would change that.

“It’s certainly not constitutional to embed discrimination in the state constitution,” says Allison Riggs, a lawyer for the Durham-based Southern Coalition for Social Justice, which successfully challenged the voter ID law in court. “The intent being employed here is obvious: the legislature is trying to trick the voters into doing the heavy lifting for them. That doesn’t cure them of their discriminatory intent.” Voting rights groups in North Carolina, such as Democracy NC, have come out in opposition to the amendment.

The next attack on our democracy is here. #ncga leaders say they will introduce a constitutional amendment requiring voter identification to cast a ballot in North Carolina. Our response: https://t.co/nGYedLvYm9 #suppressionsession pic.twitter.com/fD7I0SZULz

House Speaker Tim Moore called the amendment a “commonsense measure to secure the integrity of our elections system.” But the Fourth Circuit found that stopping voter fraud was not a compelling rationale for the law, noting that “the State has failed to identify even a single individual who has ever been charged with committing in-person voter fraud in North Carolina.”

Republicans expect the constitutional amendment to energize conservative voters and pass in November. Similar voter ID amendments were defeated by voters in Minnesota in 2012 but passed in Missouri in 2016.