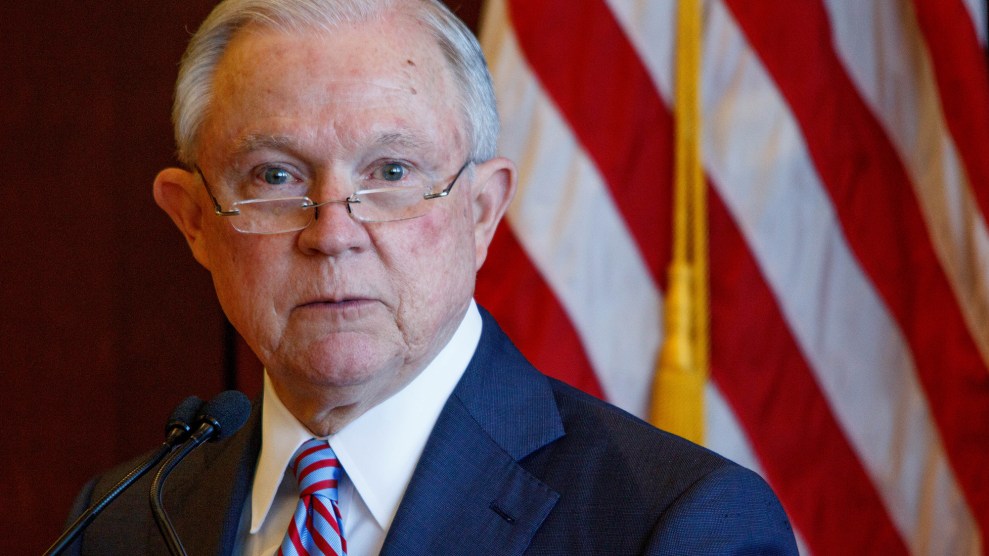 The Methodists, who are known for being fairly chill in the grand scheme of organized religion, are apparently considering kicking Attorney General Jeff Sessions out of their church. Turns out they don’t much like the administration’s policy of separating families at the border—or the way the attorney general has tried to defend his policies using the Bible.

More than 600 Methodist clergy and church members from across the country have signed a letter asking Sessions’ pastors to bring formal church charges against him—such as child abuse, immorality, racial discrimination, and the dissemination of false doctrine (for example, using Romans 13 to justify the family separation policy).

The letter, sent on Monday, is addressed to Rev. Sterling Boykin in Alabama and Rev. Tracy Wines in Virginia, and it does not mince words.

“We write to you, Mr. Sessions’ pastors, copying his District Superintendents and Bishops, in the hopes that you will, as members of our connectional system, dig deeply into Mr. Sessions’ advocacy and actions that have led to harm against thousands of vulnerable humans,” the letter reads. “As members of the United Methodist Church, we deeply hope for a reconciling process that will help this long-time member of our connection step back from his harmful actions and work to repair the damage he is currently causing to immigrants, particularly children and families.”

The undersigned cite “the severe and ongoing impact of several of his public, professional actions” as the impetus for this unusual call to action. Sessions has been an active member of the United Methodist Church for many years, serving as a Sunday School teacher in his home church, Ashland Place United Methodist Church in Mobile, Ala., and also representing them as a delegate to the annual Methodist General Conference. It’s likely his leadership roles in the church and the frequent invocation of his faith as a political motivating force pushed the clergy and church members to bring these charges.

Technically, anyone within the Methodist Church can bring charges against any other member, and charges can theoretically lead to expulsion from the church community following an ecclesiastical trial. In practice, however, charges are extremely rare, especially against laypeople, and almost never move beyond the level of individual mediation at a local church level.

According to the United Methodist Church’s news service, the next step is for Sessions’ pastor and district superintendent to try and resolve the complaint using “pastoral steps.” It’s unclear exactly what that would look like, but if they fail, the church would continue following steps laid out in its Book of Discipline toward expulsion.

Rev. David Wright, a Pacific Northwest Conference elder and organizer of the effort to charge Sessions, told the church’s news service that he “really never would have thought” he would find himself working on charges against a fellow Methodist, much less a lay person.

“I hope his pastor can have a good conversation with him and come to a good resolution that helps him reclaim his values that many of us feel he’s violated as a Methodist,” he said. “I would look upon his being taken out of the denomination or leaving as a tragedy. That’s not what I would want from this.”