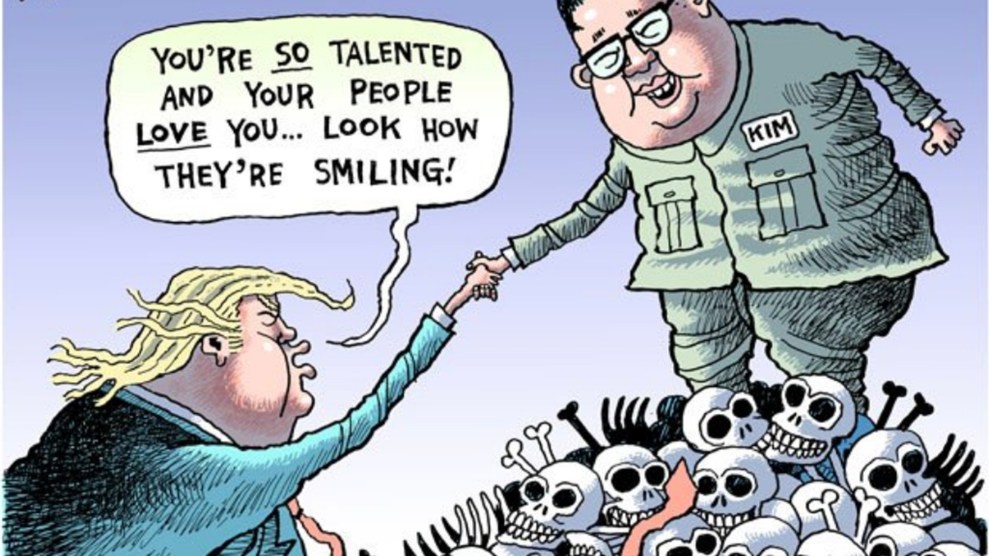 On Thursday, veteran editorial cartoonist Rob Rogers was abruptly fired from the Pittsburgh Post-Gazette after a string of anti-Trump illustrations were spiked from the newspaper.

Rogers, who joined the Post-Gazette in 1993, says 19 cartoons or proposed drawings were killed by the paper over a three-month period, including six in a single week shortly before he was fired. “After so many years of punch lines and caricatures, skewering mayors and mullahs, the new regime at The Pittsburgh Post-Gazette decided that The Donald trumped satire when it came to its editorial pages,” he wrote in an op-ed on Friday.

The Post-Gazette’s publisher and editor-in-chief, John Robinson Block—who boasted about joining Donald Trump on his private jet at the height of the 2016 presidential campaign—defended the decision. “It has little to do with politics, ideology or Donald Trump,” he told the Washington Post. “It has mostly to do with working together and the editing process.”

Below are some of Rogers’ recent cartoons going after some of Trump’s most divisive and disturbing actions as president. “The paper may have taken an eraser to my cartoons,” Rogers wrote in the op-ed. “But I plan to be at my drawing table every day of this presidency.”

Things with my paper are still unresolved but I decided to draw this one for syndication only. Enjoy. Summit cartoon: https://t.co/gGOKCq5thp #TrumpKimSummit #KimJongUn #Trump #TrumpKim #nukes #HumanRights #NorthKorea pic.twitter.com/9eA1gnnfzO