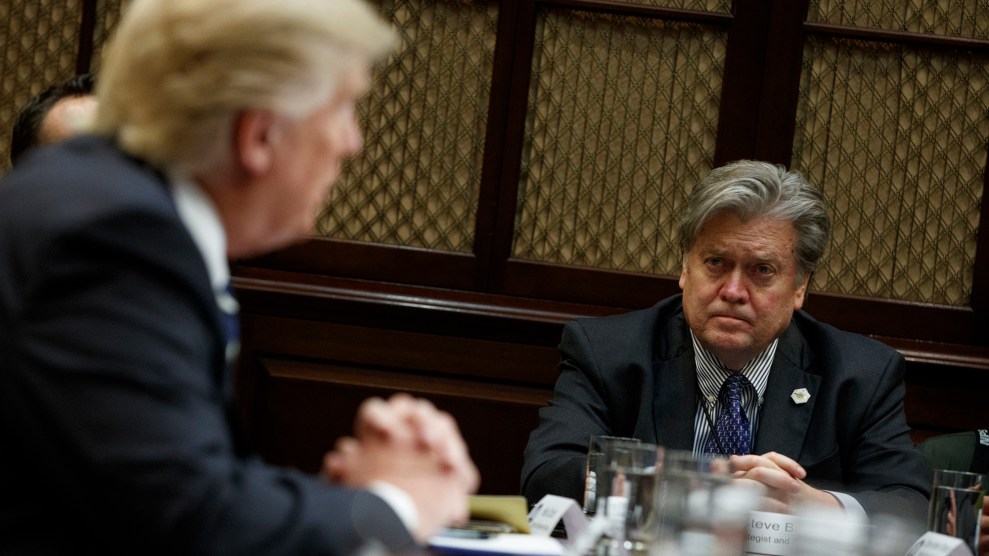 In December 2017, the Justice Department asked the Commerce Department, which oversees the Census Bureau, to add a controversial question about US citizenship to the 2020 census for the first time since 1950. Civil rights groups charged that the question would depress the response rate from immigrants and threaten the accuracy and fairness of the census. The Justice Department justified the question by arguing it was needed to “fully enforce” the Voting Rights Act (VRA). But new documents show there was another reason anti-immigration hardliners like Steve Bannon were pushing for the citizenship question.

On Friday, the Justice Department released more than 1,300 pages of documents as part of a lawsuit filed by New York and 16 other states agains the Trump administration. These files showed that prominent anti-immigration forces inside and outside the Trump administration were hoping that census data resulting from the citizenship question would be used to allocate political representation on the basis of the number of citizens in a district or state rather than the total population. In other words, a state’s number of representatives in Congress would be determined by its population of citizens—a radical departure from the current practice of counting every person regardless of citizenship. The change would deny immigrant communities significant representation and shift political power to whiter and more Republican areas.

The initial push for the citizenship question now appears to have come from Bannon, back when he was a top White House adviser. In July 2017, months before the Justice Department proposed the question, Kansas Secretary of State Kris Kobach—at the time the vice chair of President Donald Trump’s now-defunct Election Integrity Commission—wrote to Commerce Secretary Wilbur Ross. He told Ross that he was writing “at the direction of Steve Bannon” and said it was “essential” that the citizenship question be added to the census. Kobach wrote that the absence of a citizenship question “leads to the problem that aliens who do not actually ‘reside’ in the United States are still counted for congressional apportionment purposes.”

Kobach’s correspondence with Ross contradicts the Trump administration’s stated rationale for the question—Kobach never mentioned the VRA in his letter—and lends credence to the view that the question was added to target areas with many immigrants and boost Republicans politically.

Kobach has a long history of voter suppression and was recently held in contempt of court for refusing to register voters in Kansas.

The Constitution requires the census to count “the whole number of persons in each State” regardless of citizenship or legal status. In the 2016 case Evenwel v. Abbott, the Supreme Court unanimously ruled that states should draw legislative maps based on total population, not the number of citizens in a district. “It remains beyond doubt that the principle of representational equality figured prominently in the decision to count people, whether or not they qualify as voters,” wrote Justice Ruth Bader Ginsburg in an 8-0 opinion.

Nonetheless, anti-immigrant Republicans are now endorsing Kobach’s position. At a hearing on Capitol Hill on Friday, Rep. Steve King (R-Iowa), who chairs the House Judiciary Committee’s subpanel on the Constitution, said “illegal aliens” should be excluded from political representation.

The documents, first reported by NPR, also show that Ross overruled career census staff in making his decision in March to approve the citizenship question. (He wrote at the time that it would lead to “more effective enforcement” of the VRA.) John Abowd, the chief scientist at the Census Bureau, wrote to Ross that the citizenship question “is very costly, harms the quality of the census count, and would use substantially less accurate citizenship status data than are available from administrative sources.”

Six major lawsuits, including the one from New York and 16 other states, are currently challenging the citizenship question.