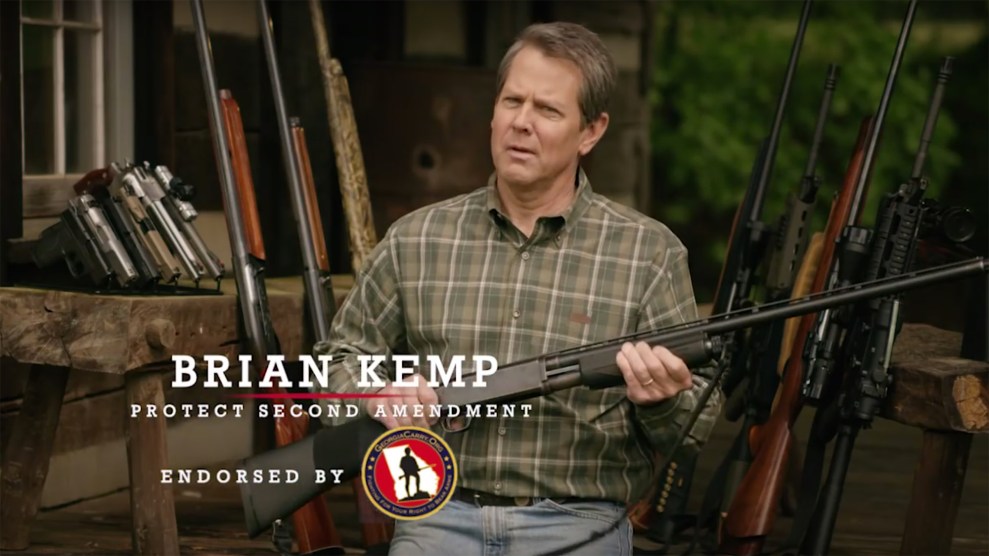 President Donald Trump on Tuesday waded into the increasingly nasty Georgia Republican gubernatorial primary and endorsed Secretary of State Brian Kemp ahead of next week’s runoff.

The endorsement is a big boost for Kemp, a politician in the Trump mold who brags in campaign ads about being “so conservative” that he drives a “big truck” so he can, if need be, abduct undocumented immigrants and transport them to back to their countries of origin.

But Kemp shouldn’t get too attached to Trump’s kind words, because they are, with only slight variations, a carbon copy of basically every other endorsement the president ever given over Twitter:

Congressman Ron DeSantis, a top student at Yale and Harvard Law School, is running for Governor of the Great State of Florida. Ron is strong on Borders, tough on Crime & big on Cutting Taxes – Loves our Military & our Vets. He will be a Great Governor & has my full Endorsement!

Henry McMaster loves the people of South Carolina and was with me from the beginning. He is strong on Crime and Borders, great for our Military and our Vets. He is doing a fantastic job as your Governor, and has my full endorsement, a special guy. Vote on Tuesday!

Heading to Moon Township, Pennsylvania, to be with a really good person, State Representative Rick Saccone, who is running for Congress. Big & happy crowd (why not, some of the best economic numbers ever). Rick will help me a lot. Also, tough on crime & border. Loves 2nd A & VETS

.@RepClayHiggins has been a great help to me on Cutting Taxes, creating great new healthcare programs at low cost, fighting for Border Security, our Military and are Vets. He is tough on Crime and has my full Endorsement. The Great State of Louisiana, we want Clay!

I strongly endorse Adam Laxalt for Governor of Nevada. Adam is smart, works hard, and knows how to win. He will be a great Governor. Also, will fight hard to lower your taxes and is tough on crime!

Congressman Matt Gaetz of Florida is one of the finest and most talented people in Congress. Strong on Crime, the Border, Illegal Immigration, the 2nd Amendment, our great Military & Vets, Matt worked tirelessly on helping to get our Massive Tax Cuts. He has my Full Endorsement!

.@AsaHutchinson, the great Governor of Arkansas, is in a primary tomorrow. He has done an incredible job with a focus on lower taxes, border security, and crime prevention. Asa loves our military and our veterans. I fully endorse Asa for Governor!

Arizona, please get out today and vote @DebbieLesko for Congress in #AZ08. Strong on Border, Immigration and Crime. Great on the Military. Time is ticking down – get out and VOTE today. We need Debbie in Congress!

.@MarshaBlackburn is a wonderful woman who has always been there when we have needed her. Great on the Military, Border Security and Crime. Loves and works hard for the people of Tennessee. She has my full endorsement and I will be there to campaign with her!