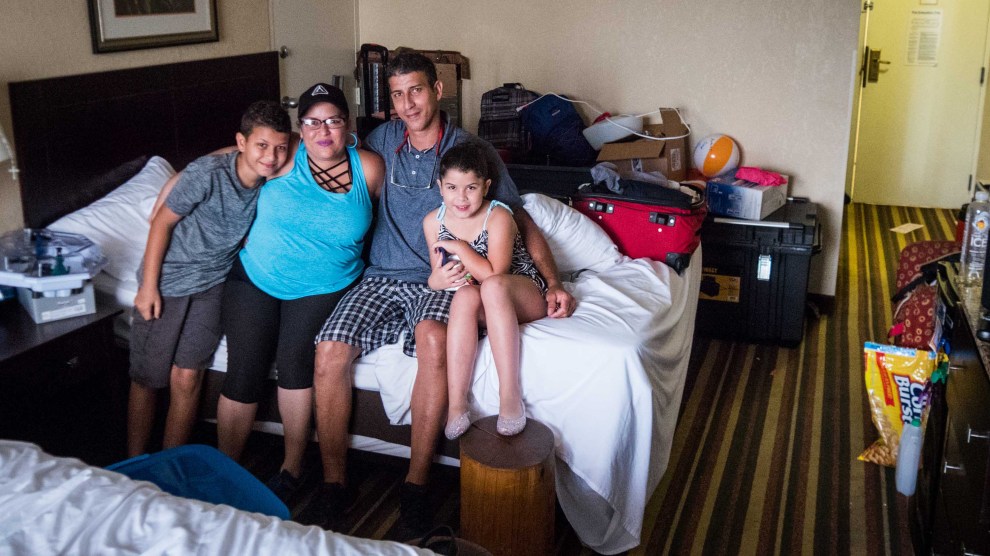 Betzaida Crespo and her family have shared this Orlando hotel room since November.Tim McDonnell

Nearly 2,000 families who fled Puerto Rico after Hurricane Maria could once again find themselves without a place to live if a federal court allows the US government to cut off housing subsidies for people displaced by the storm.

One of those families is led by Betzaida Crespo. Betsy, as she’s known, left Dorado, Puerto Rico, in November with her husband Erín and their young son and daughter after their home was severely damaged by the hurricane. Like an estimated 150,000 other Puerto Ricans, the family boarded a plane to Florida. When they arrived in Orlando, they signed up to receive temporary housing aid from the Federal Emergency Management Agency. They moved into a room with two queen-size beds at a Holiday Inn just down the street from Disney World, and they’ve lived there ever since.

“The reality is we have nowhere else to go. After here, we could be on the streets.”

The room has all the trappings of any young family’s home, condensed into less than 200 square feet. The walls are lined with plastic footlockers that have been jammed full of clothing. Action figures are piled on the floor next to tools belonging to Erín, a handyman. Ramen and canned food are stacked on a rickety table alongside a single electric burner and a rice cooker. A bouquet of fresh-cut flowers fills a pink plastic water bottle on the window ledge.

Living in this cramped space has put the whole family on edge, Betsy says. Their months-long search for their own apartment—on what Erín can earn from odd jobs, in a sprawling metropolitan area with one of the country’s worst affordable housing markets—has been unsuccessful. Betsy struggles with crippling anxiety and depression and suffers from back pain caused by scoliosis. She has bad credit from a dispute with a previous landlord. After she gets her children to sleep and steals a rare private moment with Erín in the bathroom, she often lays awake until 4 a.m., scrolling aimlessly on her phone.

Her mind constantly circles the same question: What next?

“The reality is we have nowhere else to go,” she says. “After here, we could be on the streets.”

At its peak, FEMA’s Transitional Sheltering Assistance—or TSA—program was paying the cost of hotel rooms around the country for more than 7,000 Puerto Rican families displaced by Hurricane Maria. As many families have found their own housing or returned to the island, that number has fallen to around 1,700. Roughly a third of those families are in Florida, the number-one destination for Puerto Ricans who fled the hurricane’s aftermath.

Many of those who remain in the program are among the most vulnerable members of society: people with disabilities or who have children with disabilities, the elderly, single mothers. Like the Crespos, hundreds are stuck in hotel rooms, unable to find their own housing but unwilling to return to Puerto Rico, where recovery from the hurricane has been glacial and options for housing often are even worse.

This week, many are again facing homelessness, according to advocacy groups in Orlando and interviews with a half-dozen families. The TSA program was set to expire this past weekend, touching off a last-minute scramble to find new housing, as well as a series of protests aimed at pressuring Gov. Rick Scott (R) to intervene with FEMA on the families’ behalf. Late Saturday night, a federal judge in Massachusetts granted a three-day, nationwide extension of the program while the court hears arguments in a lawsuit filed by LatinoJustice PRLDEF, a civil rights group. The group has asked the judge to block block evictions and to require FEMA to extend further housing aid. On Tuesday morning, the judge extended the stay through July 23

The last-might reprieve came as a relief to the Crespos and other families who had begun moving their belongings into cars and storage units in anticipation of being kicked out of their hotel rooms. But in Orlando, which received more displaced Puerto Ricans than anywhere else in the country, a few more weeks may not be enough to change the circumstances of families who have already spent months fruitlessly searching for new housing.

At this critical turning point, with the TSA program potentially ending, FEMA and other government agencies are allowing hundreds of families to fall through the cracks, says Betsy Franceschini, the Florida state director for the nonprofit Hispanic Federation.

“It’s a crisis that we’re facing,” she says. “It is a situation of desperation for a majority of the families.”

“We’re doing everything we can, but there’s always a new, bigger barrier.”

Orlando is a particularly challenging location in which to find affordable housing. According to a March report by the National Low Income Housing Coalition, there are enough affordable and available rental units for only 17 percent extremely low-income families in the area. (Rent is considered affordable if it is not more than 30 percent of monthly income). That’s the second-worst affordable housing rate in the nation, after only Las Vegas. In order to afford the rent on an average two-bedroom apartment in the Orlando area, the coalition found, a household must earn at least $21.08 per hour, nearly three times the state’s minimum wage.

This math—combined with the standard requirement that tenants pay a deposit and the first and last month’s rent upfront, and that they earn at least three times their monthly rent—presents an insurmountable barrier for many displaced Puerto Rican families. Waiting lists for affordable apartments are often several years long; even many homeless shelters in the city have wait lists.

Short-term workarounds, like crashing on friends’ couches or in a car, are often precursors to sleeping on the street, notes Sarah Mickelson, the coalition’s senior director for public policy.

“The greatest shortfall for housing is with the people with the lowest incomes,” Mickelson warns. “After FEMA’s TSA assistance ends, some people will immediately face homelessness, while others will be forced into precarious housing situations that can eventually lead to homelessness.”

Ariana Colon, 20, who lives at the same Holiday Inn as the Crespos with her boyfriend and 1-year-old son, fears they may be about to face that situation. Colon, who is 18 weeks pregnant, recently found a part-time job at a Panera Bread restaurant, where she expects to earn a little more than $100 per week. Most of that will go to pay for the child care she needs in order to keep the job. What’s left, plus what her boyfriend earns as a barber, has not been enough for them to be accepted to live in any of the apartments they’ve applied for. When the TSA program expires, the growing family plans to move into the spare bedroom of a local Puerto Rican family they connected with on Facebook—and keep trying from there.

“We didn’t come here just to give up,” Colon says. “We came here because we wanted to grow, and build ourselves again. And we’re doing everything we can, but there’s always a new, bigger barrier.”

FEMA spokesperson Dasha Castillo points out that the TSA program “is designed as a short-term solution” and “is meant to serve as a bridge to other long-term housing.” But other sources of federal housing aid meant to help families like the Crespos and Colons cross that bridge—including direct coverage of longer-term lease payments by FEMA and a Department of Housing and Urban Development program that provides rental assistance—have not yet been made available to displaced Puerto Ricans in Florida.

Ana Tinsly, a spokesperson for the grassroots group Vamos4PR, argues that local and state officials should bypass FEMA and follow the example of New York City Mayor Bill DeBlasio, who announced last week that the city will provide emergency shelter to several hundred Puerto Ricans if the TSA program ends.

“[The court-ordered TSA extension] gives the government of Florida a second chance to do the right thing,” says Jose Rodriguez, a priest at a local Episcopal church that has been providing financial aid to displaced families. “But if we let the families scatter, it’s going to be a lot harder to help them.”

Sunday morning was chaotic at the Holiday Inn, as delays in communication between the court, FEMA, hotel management, and the families left many packing their belongings into trash bags even after the extension had been granted. The day before, Betsy had booked the last room at another hotel nearby—at $270 a week with a $60 deposit. When she heard about the extension, she cancelled that booking, forfeiting the deposit but gaining a few extra days to find a better option. A close friend of hers recently left Florida to work at an automotive plant in Ohio, and she might follow, she said.

For now, Betsy is living moment to moment, waiting for any news that might offer more hope for her family’s housing situation.

* This story has been updated.