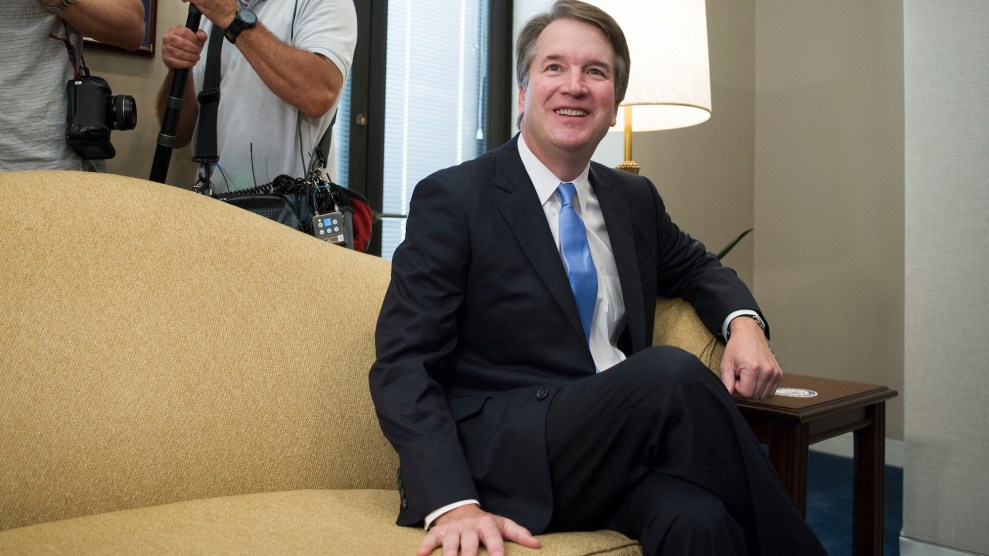 A month before President Donald Trump nominated Neil Gorsuch to the Supreme Court in January 2017, the nonprofit court watchdog group Fix the Court had already filed a Freedom of Information Act with the US Department of Justice. The group wanted records related to Gorsuch’s service as deputy assistant attorney general during the George W. Bush administration, particularly those related to any work he may have done on prisoners held at Guantanamo Bay. DOJ failed to respond to the request, in any meaningful way, and Fix the Court filed suit in February 2017. The litigation dragged on long after Gorsuch was confirmed in April, and the group finally gave up, never having obtained the full scope of Gorsuch’s records. It doesn’t intend to let that happen again with Brett Kavanaugh, Trump’s nominee to replace retiring Justice Anthony Kennedy on the Supreme Court.

Kavanaugh has been viewed for years as a potential Supreme Court nominee under a Republican president. And thanks to his many years working in GOP circles—he was once dubbed the “Forrest Gump of Republican politics”—the Senate Judiciary Committee will have a lengthy paper record to pour over from when Kavanaugh worked for Kenneth Starr in the 1990s and George W. Bush’s White House in the early 2000s. Expecting that Kavanaugh might eventually end up as a Supreme Court nominee, Fix the Court submitted records requests last year to the Department of Justice, Bush’s presidential library, and the National Archives and Records Administration, and has already filed lawsuits against DOJ and the archives to speed up those requests.

“Fix the Court was still in litigation with the Justice Department over the release of Neil Gorsuch documents more than five months after he had been sworn in as a justice. We’re not going down that road again,” Gabe Roth, the group’s executive director, said. “Given the size of Kavanaugh record and the expected timeline to confirmation, we must be more assertive to guarantee a full vetting.”

The day after President Trump announced his selection of Kavanaugh, Fix the Court sued DOJ and the National Archives for refusing to fulfill its Kavanaugh-related FOIA request in a timely fashion. This week, it stepped up the pressure and asked the US District Court for the District of Columbia to issue a preliminary injunction ordering the two agencies to produce the requested records.

“In light of the Senate Majority Leader’s announced commitment to fast-track a decision on Judge Kavanaugh’s nomination, there is an urgent need to inform the public—now—about his legal career and qualifications for a lifetime appointment to the nation’s highest court,” one of the motions says. In a motion demanding an injunction against DOJ, Fix the Court notes that other forces are already in motion to press for such a document dump.  “Deputy Attorney General Rod J. Rosenstein has contacted every United States Attorney across the country to ask that they make potentially hundreds of federal prosecutors available to assist with a prioritized review of government records pertaining to Judge Kavanaugh.”

“We must be more assertive to guarantee a full vetting.”

Fix the Court was founded to advocate for more transparency on the high court, a notoriously opaque institution. Its work has focused on getting cameras into the courtroom for oral arguments, and publicizing potential conflicts of interest among justices hearing a particular case. Lower federal court judges are bound by a judicial code of conduct that spells out when judges must recuse from a case, and prohibits them from certain behavior, such as political activity. The Supreme Court is exempt from that ethics code. Instead, individual justices decide when to step back from a case, and there’s no form of accountability if justices don’t recuse, aside from public opinion. Fix the Court has documented repeated instances of justices participating in cases where they’ve had a financial interest or other conflict. Justice Elena Kagan, for instance, twice sat on an immigrant detention case last year that she’d authorized filings in while serving as solicitor general during the Obama administration.

That’s one reason Fix the Court is interested in Kavanaugh’s full records—to help in its efforts to watchdog the justices and highlight whether they are recusing in cases where they have conflicts. It’s also why the group has filed records requests on all 25 people Trump put on his shortlist of Supreme Court nominees back in November, not just Kavanaugh. Kennedy might not be the last justice Trump gets to replace before the end of his term. “There’s no reason to not start the process early,” says Roth. When it comes to the Supreme Court and potential retirements, “It’s almost like prewriting obituaries. You know it’s going to happen eventually.”

The group may have been anticipating the Kavanaugh nomination for more than a year, but federal agencies clearly had not. Fix the Court filed a FOIA request with the Bush Library in May 2017 requesting records related to Kavanaugh’s government service. The library didn’t even process the request until April of this year, and when it did, it claimed that filling the request would take 20 years. The library also refused to divulge thousands of records on the grounds that they were exempted under the Presidential Records Act.

Fix the Court also filed a May 2017 FOIA request with DOJ seeking correspondence with the Office of Legal Counsel from the years Kavanaugh worked in the White House, both as staff secretary to President George W. Bush, as well as in the White House counsel’s office. But by the time Trump nominated Kavanaugh more than a year later, DOJ had not produced a single document in response to the request.

Then in April this year, Fix the Court asked the National Archives for all of Kavanaugh’s correspondence, notes, and memos from the period in the 1990s when he worked for Kenneth Starr in the office of the independent counsel investigating President Bill Clinton. It also asked for any complaints made against Kavanaugh by members of the public and any performance reviews, warnings, or reprimands he was given. The agency responded that such a request would take anywhere from 22 months to more than five years to fill, noting that it was still working on requests from 2013. After Kavanaugh was nominated in July, rather than press on with administrative appeals, Fix the Court took the more aggressive step of filing a lawsuit, and then asking for an injunction just days later.

The document request doesn’t seem particularly onerous. Writing in the legal blog Above the Law, attorney Joe Patrice explains that lawyers in private practice handle document requests of a similar volume all the time during litigation, and on far shorter timelines. “20,000 pages in five years? That’s reviewing a little over 300 pages a month,” Patrice wrote. “If you’re looking for work/life balance, consider the National Archives!”

The archives also has a history of swinging into action when the politics are right. The agency worked with the Clinton presidential library to release almost 170,000 documents related to Kagan’s White House service in six weeks before she was confirmed as a Supreme Court justice. Roth admits that many of the documents he’s been seeking are likely to be similar to those being requested by the Senate Judiciary Committee. But the Justice Department still withheld about 60,000 documents related to Gorsuch’s time there that were never made public before his nomination. Roth is hoping to avoid that result this time with aggressive litigation early in the process.

“Everyone agrees that it is important to vet a Supreme Court nominee in an expeditious manner, and our objective is to ensure that the public can participate fully,” says Austin Evers, executive director of American Oversight, a liberal advocacy group whose lawyers are representing Fix the Court in the FOIA litigation. “A preliminary injunction is usually seen as ‘extraordinary relief,’ but given the speed Leader [Mitch] McConnell is seeking, it’s entirely reasonable to make this request.”