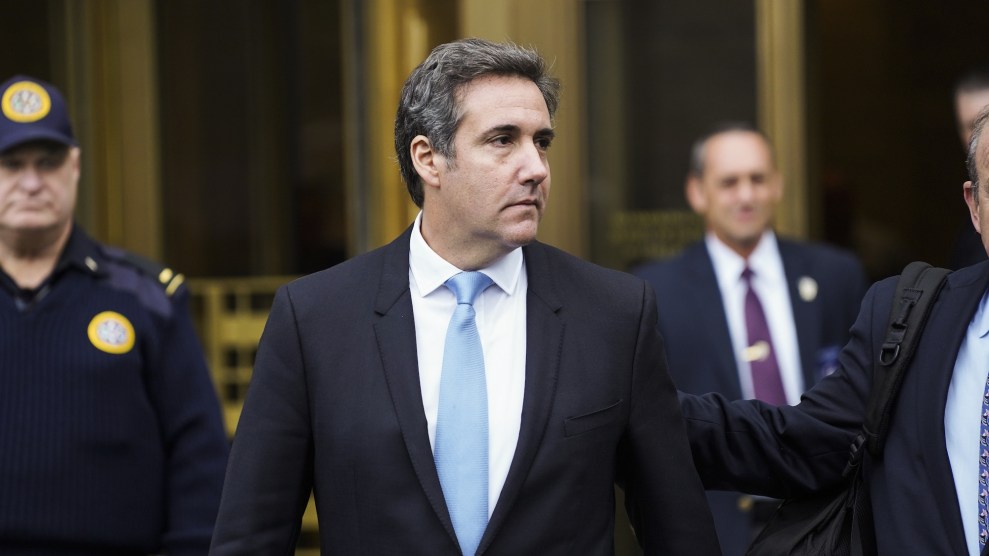 Cohen has publicly advertised his willingness to cooperate with federal prosecutors investigating him for possible campaign finance violations and financial crimes. On Thursday, CNN reported that Cohen is prepared to tell special counsel Robert Mueller that Trump knew in advance about the June 2016 meeting in Trump Tower at which Trump campaign officials expected to receive damaging information about Hillary Clinton from a Russian emissary. That’s one of several areas in which Cohen’s claims could show that Trump lied in public statements, a fact that might spell legal trouble for the president.

A letter sent Thursday by Sens. Elizabeth Warren (D-Mass.), Ron Wyden (D-Ore.), Patty Murray (D-Wash.), and Richard Blumenthal (D-Conn.) shows that Cohen’s legal plight is also drawing continued scrutiny of the companies that hired him hoping to capitalize on his access to Trump. The firms paid Cohen through a limited liability company he set up in Delaware. Cohen used the same LLC to pay hush money to women including Stormy Daniels, a pornographic actress who claims she had sex with Trump in 2006, the year after he married First Lady Melania Trump.

The lawmakers sent 29 questions to Andrew Intrater, the CEO of Columbus Nova, a New York-based investment firm. Intrater is Vekselberg’s distant cousin. Vekselberg’s conglomerate, the Renova Group, has also been Columbus Nova’s primary client. The Treasury Department sanctioned Vekselberg and Renova in April, barring them from financial transactions in the United States. Intrater, who had little prior history of political contributions, donated $250,000 to Trump’s inaugural committee and $35,000 to a Trump reelection fund in 2017. Vekselberg attended Trump’s inauguration with Intrater and discussed US-Russia relations during a meeting with Cohen in Trump Tower. Both Vekselberg and Intrater have reportedly been questioned by Mueller’s office.

Columbus Nova last year paid Cohen $500,000. Two people people speaking for the firm told Mother Jones in May that Intrater hired Cohen in the hope that he could connect the the firm with wealthy investors. In their letter, the senators alleged that Cohen tried—unsuccessfully—to convince another client, the drug company Novartis, to invest in a pharmaceutical firm tied to Columbus Nova.

The senators want to know whether the payments Columbus Nova made to Cohen were connected to Vekselberg and Russian-influence efforts. Their letter notes that “Columbus Nova began paying Mr. Cohen in January 2017 and that shortly thereafter, he worked with Ukrainian politician Andrii Artemenko to hand deliver a proposal ‘outlining a way for President Trump to lift sanctions against Russia’ to the office of then-National Security Advisor Michael Flynn.” The senators cite reporting that indicates Vekselberg hoped to fund Artemenko’s plan through Columbus Nova. They ask Intrater to explain “what relationship, if any,” he or Columbus Nova has with Artemenko.

A spokesman for Columbus Nova said Friday that Intrater and Columbus Nova had no ties to Artemenko. He said the firm is reviewing the letter.