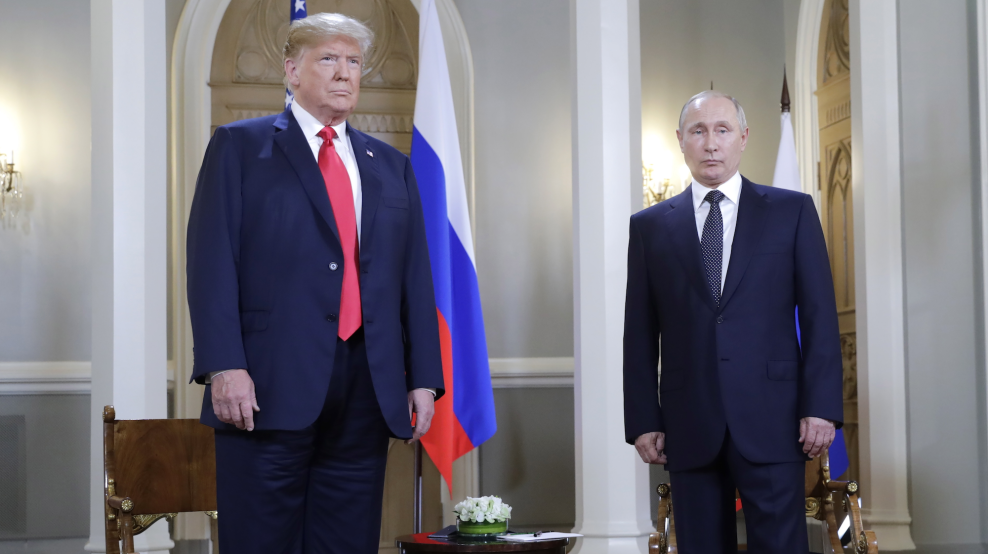 In opening remarks ahead of his one-on-one meeting with Russian President Vladimir Putin on Monday, President Donald Trump named trade, nuclear weapons, and China among the topics that would be included in the meeting’s agenda.

Noticeably absent from the list was Russia’s interference in the 2016 presidential election or the extradition of the 12 Russian intelligence operatives indicted on Friday by special counsel Robert Mueller for hacking Democratic targets, including the Democratic National Committee and members of Hillary Clinton’s campaign.

“I really think the world wants to see us get along,” the president told reporters in Helsinki as Putin looked on. “We are the two great nuclear powers.”

The striking absence of election interference in his opening remarks came hours after Trump blamed the special counsel’s investigation into Russia’s interference for worsening relations with the Kremlin—an assertion Russia’s Ministry of Foreign Affairs later backed in an extraordinary tweet. (Over the weekend, Trump reacted to the indictments against Russian intelligence officials by blasting the Obama administration.)

The congenial tone for Russia is an unmistakable shift from the combative attitude Trump demonstrated for European allies at the NATO summit in Brussels last week. Ahead of Monday’s summit, Trump also branded the European Union as a “foe” of the United States.

President Trump tells @jeffglor the European Union is a “foe” of the United States. The president also said Russia is a “foe in certain respects” and China “is a foe economically.” pic.twitter.com/yVeXYRmFn8