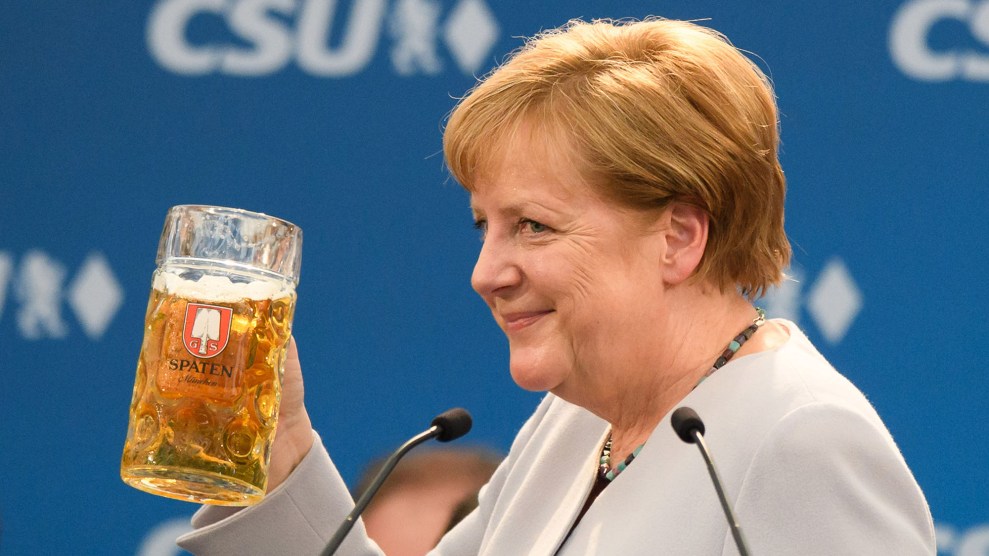 President Donald Trump pulls two Starburst candies out of his suit jacket pocket and throws them on the table in the direction of German Chancellor Angela Merkel. “Here, Angela,” he says, “don’t say I never give you anything.”

This scene, from day two of the G-7 summit in Canada this past June, was an apt metaphor for the strained relations between the two nations since Trump came to power. For America’s president, the relationship with our closest European allies is all about trade imbalances (unfair!) and military spending (too low!). For baffled German officials, the question has been how to deal with an erratic leader who contradicts (and often fires) his staff, changes his mind willy-nilly, lies with impunity, and goes out of his way to offend America’s friends while flattering autocrats in countries like Russia and North Korea.

The effort includes more than 1,000 cultural events across all 50 states, from film screenings and democracy discussions to a “Wunderbus.”

That’s the slogan for an epic charm offensive and pro-democracy campaign the German government is mounting in the United States starting in October. The “Year of Germany in the US,” a $20 million effort, will be announced Saturday in Berlin. Spanning 15 months, it will include more than 1,000 cultural events across all 50 states, ranging from film screenings and democracy discussions to the “Wunderbus,” a mobile diplomatic mission that will stop at some six dozen American schools and engage students in building Bauhaus miniatures. “We want to reach the children and the elderly,” explains Christoph Mücher, a director with the Goethe Institute who is in charge of implementing the campaign. “Bauhaus is a big hit everywhere!” There will also be parties and—yes—lots and lots of beer.

Germany has undertaken such efforts in the past. “Since reunification, there has been a tradition of representing political, economic, and cultural interests abroad under the title ‘the year of Germany,’ in countries such as China or Brazil,” Mücher says. Last year, he was part of a team that staged about 1,000 events in Mexico.

But this Year of Germany is more pressing and unprecedented in scale, with four times the budget of the last campaign. Think of it as a friendship revival mission proffered by a very worried coalition of government officials (the German Federal Foreign Office), business leaders (the Federation of German Industries), and cultural ambassadors (the Goethe Institute). Just after Trump was elected, Merkel released a statement: “Germany and America are linked by values: Democracy, freedom, respect for human rights and dignity—regardless of origin, color, religion, gender, sexual orientation or political opinion. On the basis of these values, I offer close cooperation to the future President of the United States of America, Donald Trump.”

Americans helped bring those values to Germany more than 70 years ago. Now Germany wants to return the favor. “We can no longer trust the White House without reservations,” the Foreign Office posted on Facebook this week. “That is why our policy towards the United States must change.”

The Year of Germany might have made its way to America eventually, but the partners admit that the timing is no coincidence. “Trans-Atlantic relations have come under pressure recently,” notes Mücher. “With more than 300 partners, the campaign can demonstrate that German-American friendship reaches deep.”

“It is of strategic importance that we clearly signal to Washington that we want to work together, but we will not allow you to go over our heads.’’

The three major partners came together in Berlin early last year to hash out the broad outlines. German President Frank-Walter Steinmeier himself will act as the program’s patron. “We want to talk to people in the USA about the issues that are important for our society: freedom, diversity, responsibility, the future of work, digitization, energy, climate and sustainability, science and education, culture, lifestyle, and German traditions,” says Andreas Görgen, head of the Foreign Office’s culture and communications directorate. “We want to get in touch with people, not just on the coasts, but from Kansas to Alabama.”

“In this situation, it is of strategic importance that we clearly signal to Washington that we want to work together,” notes Foreign Affairs Minister Heiko Maas. “But we will not allow you to go over our heads.’’

With the rough outline in place, a team from the Goethe Institute—eight Americans and eight Germans—convened in Washington, DC, to start planning the events, with the broader goal, according to Görgen, of supplementing “America First” with “Wunderbar Together.” In the beginning, the team feared their new slogan might sound naïve, but test-marketing in both countries suggested that “Wunderbar” would work well. “The year should also be fun,” Mücher says. And a multimillion-dollar video and social-media campaign aims to ensure that this Year of Germany will have a broader reach than its predecessors.

“Every sixth American claims to have German roots—that’s 54 million people,” Görgen points out, an aspect that will be emphasized particularly given that one of those Americans is Trump. In April, Merkel presented Trump with a 1705 engraving depicting a map of the part of Germany that includes the Trumps’ ancestral village.

Underlying this trans-Atlantic love fest are hard economic realities. Last year, for the third year in a row, America was Germany’s most important foreign customer, importing more than $129 billion worth of goods. And nearly 9 percent of German exports go to the United States—metal products alone amount to $4.2 billion. More than a million German jobs depend on those exports, and another 630,000 Germans are employed by US firms, from Ford to McDonald’s, that operate in Germany. Meanwhile, German companies create hundreds of thousands of jobs in the United States, at firms like Siemens, DHL, and BMW—which Trump has often cited by name, along with Mercedes, as a tariff target. And Ford and Chrysler rely on a German company, Schaeffler, for millions of parts. It’s little wonder that German businesses are eager to expand their American contacts to help cushion themselves from the whims of this White House.

Before Trump came along, America’s relationship with Germany was cozy. After the election, during his final tour as president, Barack Obama stopped in Berlin to emphasize trans-Atlantic relations and have a three-hour private dinner with Merkel, whose policies were already under attack by Trump. During the campaign, in Youngstown, Ohio, Trump called Hillary Clinton “America’s Angela Merkel…And you know what a disaster this massive immigration has been to Germany and the people of Germany. Crime has risen to levels that no one thought they would ever, ever see. It is a catastrophe.”

In an interview this year, Trump claimed that Merkel “was a superstar until she allowed millions of people to come to Germany” and again described NATO, the longtime cornerstone of German foreign policy, as “obsolete.” On Merkel’s first state visit, Trump even refused to shake her hand during an Oval Office photo op.

There have been tensions between the two countries in the recent past. In the early 2000s, when President George W. Bush asked then-Chancellor Gerhard Schröder for his support in the Iraq War, Schröder refused. Today, there is no big coalition bombing campaign, no international bugging scandal, no major issues on which the two nations fundamentally disagree. And yet, “Trump is anxious to stir up crises with our European partners,” says Jeffrey Anderson, a professor at Georgetown University’s Walsh School of Foreign Service.

“We don’t want to interfere with politics…Trans-Atlantic relations deserve a more patient and sustainable approach.”

“We are in a rocky period,” says Karen Donfried, president of the German Marshall Fund of the United States, which promotes trans-Atlantic cooperation. But “we don’t want to interfere with politics,” Mücher insists. “Trans-Atlantic relations deserve a more patient and sustainable approach. Our American partners are pleased that Germany is still investing in German-American friendship.”

This weekend in Berlin’s Potsdamer Platz, more than 4,000 miles from the White House, German citizens will join business leaders, diplomats, and other dignitaries as they announce the new campaign and mark the 70th anniversary of the Berlin Airlift. Couples will snap selfies, kids will draw pictures, and families will mug for the camera in the “Wunderbar Together” photobooth as the partners present their projects for the Year of Germany in the United States. On Sunday afternoon, Foreign Minister Heiko Maas will release an abundance of “Wunderbar Together” balloons. These balloons will not make it to America, of course, but perhaps the photos will, carrying a not-so-subtle message: that this could be the restart of a beautiful friendship—not with Trump, but with America herself.