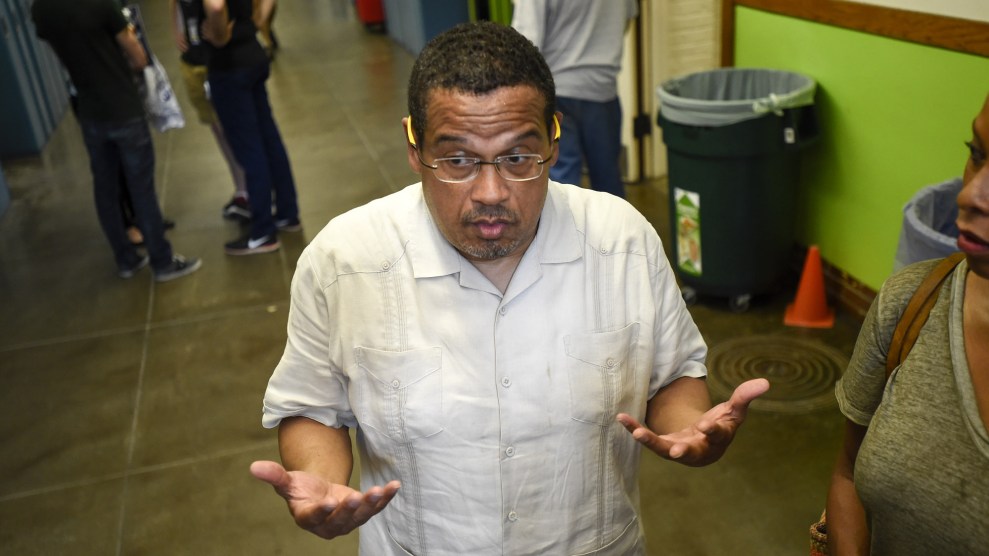 Rep. Keith Ellison (D-Minn.) easily won his party’s nomination to be the state’s next attorney general on Tuesday, dispatching the rest of the five-candidate field with nearly 50 percent of the vote. Ellison, the first Muslim ever to serve in Congress, is a favorite on the left for his progressive voting record, community organizing work, and support of Vermont Sen. Bernie Sanders. But Ellison’s political future now looks increasingly uncertain amid new allegations of sexual abuse from an ex-girlfriend.

On Saturday, Austin Monahan, the son of Ellison’s ex-girlfriend Karen Monahan, published a Facebook post alleging that he’d seen a video of the Minnesota congressman dragging his mother off a bed. Ellison released a statement confirming he’d been in a relationship with Monahan that ended in 2016 but denying the alleged abuse. Minnesota Public Radio and CNN both reviewed texts between Ellison and Monahan from the time, none of which discussed abuse. But one 2017 text, after the relationship had ended, specifically referred to the alleged incident on the bed.

“Keith, We never discussed—the video I have of you trying to drag me off the bed, yelling get the fuck out now, calling me a bitch and saying I hate you bitch,” Monahan wrote, in one message obtained by CNN. Ellison did not respond to that message.

Monahan confirmed to MPR that a video did exist, though she said did not intend to release it because “it sets the expectation for survivors of all kinds of forms of abuse, whether it be abuse toward women, abuse from police officers, abuse from other people in power, to have to be the ones, like I’m doing right now, to show and prove their stories.” She said she hadn’t intended to come forward, but her son’s post had forced her hand. Ellison has denied any wrongdoing.

Monahan is not the first woman to allege mistreatment by Ellison. During his first run for Congress in 2006, Amy Alexander, a former progressive political activist in the Twin Cities who said she had been in a relationship with the then-married Ellison, alleged that Ellison had come to her house, grabbed and shoved her, and broken her screen door. She also alleged that Ellison’s lawyer had approached her the day of the district nominating convention to ask her to keep quiet. Ellison deflected the accusations, accusing Alexander and an associate of extortion and suggesting that she was upset at not being hired by his environmental justice group. In the end, it was Ellison who secured a restraining order against Alexander. Alexander was barred by a judge from discussing the matter further.

Thus far, Ellison hasn’t faced the kind of resounding calls from colleagues to step aside that compelled Minnesota Sen. Al Franken to resign last spring following a string of allegations of groping. The National Organization for Women called on Ellison to drop out, and the Sierra Club, Monahan’s employer, released a statement standing by Monahan and saying it was “deeply troubled and disturbed” by the allegations. But no other major progressive institutions and organizations—most notably, the Democratic National Committee, where Ellison serves as deputy chair—have stepped in to do the same.

Ellison, for his part, isn’t acting like someone in the midst of a possible career-ending story. After his race was called on Tuesday, he dropped by a victory party for his House colleague Tim Walz, who won the Democratic nomination for governor. Over the next three months, other Minnesota Democrats may find their position—and his—increasingly untenable, but for one night at least, no one seemed to care: