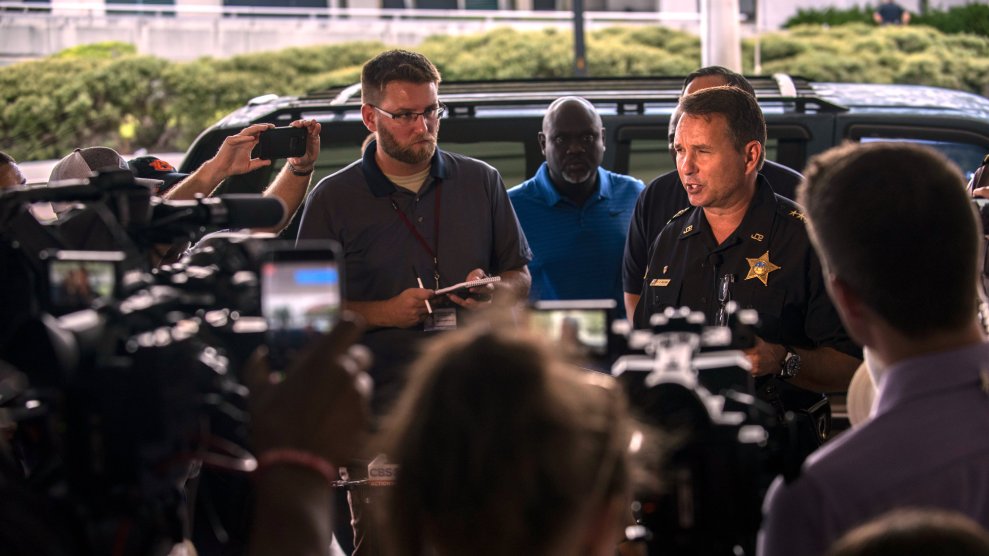 Jacksonville Sheriff Mike Williams, right, holds a news conference Sunday after a gunman opened fire during an online video game tournament that was being livestreamed from a Florida mall, killing multiple people and sending many others to hospitals.Laura Heald/AP

Update 5 pm ET: Jacksonville sheriff Mike Williams said at a press conference Sunday afternoon that the scene had been cleared and that there were no outstanding suspects.

The Jacksonville, Florida, sheriff’s office is warning people to stay away from a riverfront entertainment district there known as the Landing, after a mass shooting event Sunday.

We can’t stress enough to stay away. Many blocks away. https://t.co/qBJvkaO7xT

Local news sources report that 11 people were shot and four killed in the shooting, and the sheriff’s office says that one suspect is reported dead at the scene. The shooting occurred at a Madden football video game tournament taking place at the Landing. One of the competitors, Drini Gjoka, who last year became the youngest competitor ever to win an EA Sports Madden NFL Championship Series belt, was among the injured: He tweeted from inside the event:

The tourney just got shot up. Im leavinng and never coming back

I am literally so lucky. The bullet hit my thumb

A tweet that appears to include footage of the tournament interrupted by gunshots and screams from the shooting is making the rounds. (Warning: disturbing content.)

Footage of Madden game in progress and then the #TheLandingMassShooting shots and screams in the background. https://t.co/S9Drl3ohU1

David Hogg, a former student at Marjorie Stoneman Douglas High School in Parkland, Florida, who survived the February shooting there that killed 17 people, was with other gun control activists in front of a Smith & Wesson facility in Massachusetts protesting gun violence when the shooting in Jacksonville took place. He tweeted at his home-state senator, Marco Rubio (R):

How many mass shootings in your state will it take for you to do something?

He also called on the media asking that they not publicize the name or photo of the alleged shooter once his identity is known, as part of an effort to take the celebrity out of mass shootings:

If you see any outlet report the name of the shooter or show their face immediately call them and demand they edit the name and face out and if they refuse simply unsubscribe and unfollow. #NoNotoriety

This is a developing story and Mother Jones will update as more information becomes available.