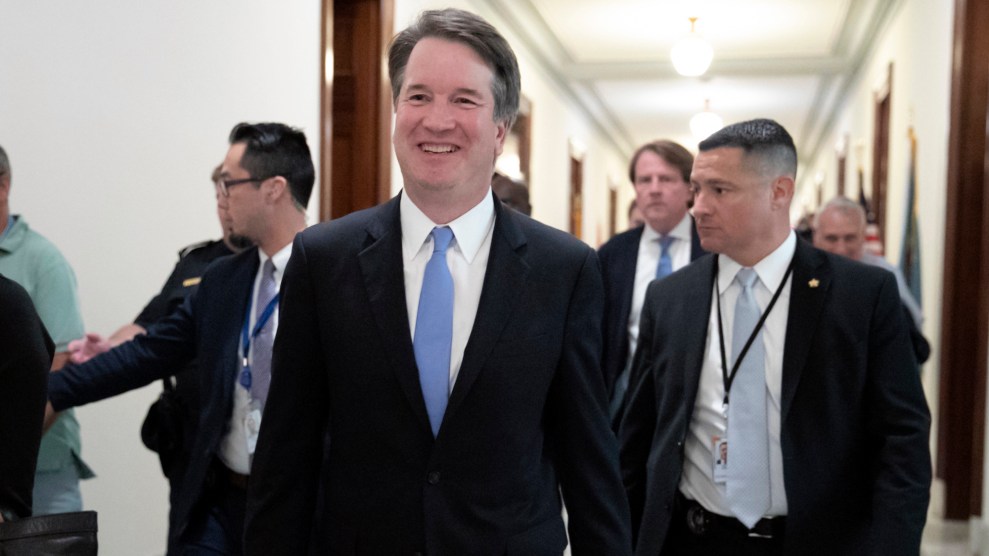 Brett Kavanaugh, President Donald Trump’s latest nominee to the Supreme Court whose confirmation hearings begin next week, has been very outspoken in his views about government regulation. In both his rulings and public speeches, he has criticized a Supreme Court precedent that instructs judges to defer to federal agencies when interpreting environmental or consumer protection regulations. He has suggested that such deference allows federal agencies to run amok in their efforts to crack down on alleged wrongdoing by polluters or dangerous industries, and that the high court precedent may be a mistake.

Public interest and environmental activists fear that if Kavanaugh is confirmed to the Supreme Court, he will form a solid voting block bent on overturning that precedent, which will then help weaken health, safety, and environmental regulations.

But a new study out from the consumer group Public Citizen found that in his decisions from the bench, Kavanaugh’s distaste for the work of federal agencies like the EPA or the FCC on regulatory issues has not been so consistent. President George W. Bush appointed Kavanaugh to the influential DC Circuit Court of Appeals in 2006, and since then, he’s been involved in more than 1,000 cases. Public Citizen found that in many of the most contentious ones, Kavanaugh has frequently argued in favor of deferring to federal regulatory agencies—but only when they’re ruling in favor of big corporations. The report states:

Judge Kavanaugh’s decisions—including those in the environmental and labor law spheres, as discussed in other sections of this report—do not show consistency on the question of deference. Rather, what emerges is a very clear and consistent pattern of strong deference to agency action when that action is challenged by public interest groups or individuals, and no deference—and sometimes hostility—to agency actions challenged by corporations.

“As a member of the court of appeals for the DC Circuit, Judge Kavanaugh was very generous in deferring to executive agencies when their actions and decisions were challenged by consumer or public interest groups,” Public Citizen President Robert Weissman said. “It was a different story when corporations challenged agencies; in those cases, he showed little or no deference.”

Kavanaugh gave a speech at the University of Notre Dame in February last year in which he dissed a wonky legal doctrine known as Chevron deference, named after a 1984 Supreme Court decision Chevron v Natural Resources Defense Council. In that case, the court found that judges should defer to agencies’ expertise in regulatory and administrative cases where there’s a lot of ambiguity, and Congress wasn’t entirely clear as to its intentions.

Chevron has become anathema to a lot of big corporations and conservatives like Kavanaugh, who see it as a blunt instrument wielded by environmental and consumer groups to crack down on dirty and dangerous industries. In July, Pema Levy quoted Kavanaugh in Mother Jones: “The Chevron doctrine encourages agency aggressiveness on a large scale,” he said at Notre Dame, echoing an argument he’d made in the Harvard Law Review the year before. “Under the guise of ambiguity, agencies can stretch the meaning of statutes enacted by Congress to accommodate their preferred policy outcomes.”

Most of the cases Kavanaugh has been involved with were resolved by a three-judge panel and, less often, by all the judges in the circuit sitting en banc. Lots of those cases, particularly those involving the three-judge panels, were decided unanimously. So Public Citizen analyzed the 101 cases that weren’t resolved by a unanimous vote and in which Kavanaugh wrote an opinion. The review of such split cases was designed to take a closer look at his judicial philosophy and views on the law where judges in the case disagreed.

The numbers are striking, and they show a great deal of consistency—of outcomes,  if not judicial philosophy. From the report:

For example, in most of his split decision opinions, Kavanaugh frequently found that the EPA had exceeded its authority in cases ranging from one that involved greenhouse gas regulation, to emission reduction standards, to regulations of toxic hydrofluorocarbon emissions. Yet in Sierra Club v EPA, Kavanaugh couldn’t have been more welcoming of the agency’s ruling. That’s because the EPA regulation in that case was a George W. Bush-era measure that relaxed pollution monitoring requirements required under the Clean Air Act. It would have blocked states and local governments from creating tougher environmental permitting rules than those at the federal level. His two Republican colleagues found that the agency had overstepped its authority and overturned the regulation, but Kavanaugh disagreed. He wrote a dissent saying that he would have upheld the EPA rule.

Public Citizen also found that Kavanaugh has had a consistent record of denying standing to consumer and environmental groups in cases where those parties were trying to challenge an agency in ways that would protect the public. But he rarely found that an industry group couldn’t bring such a challenge in court.