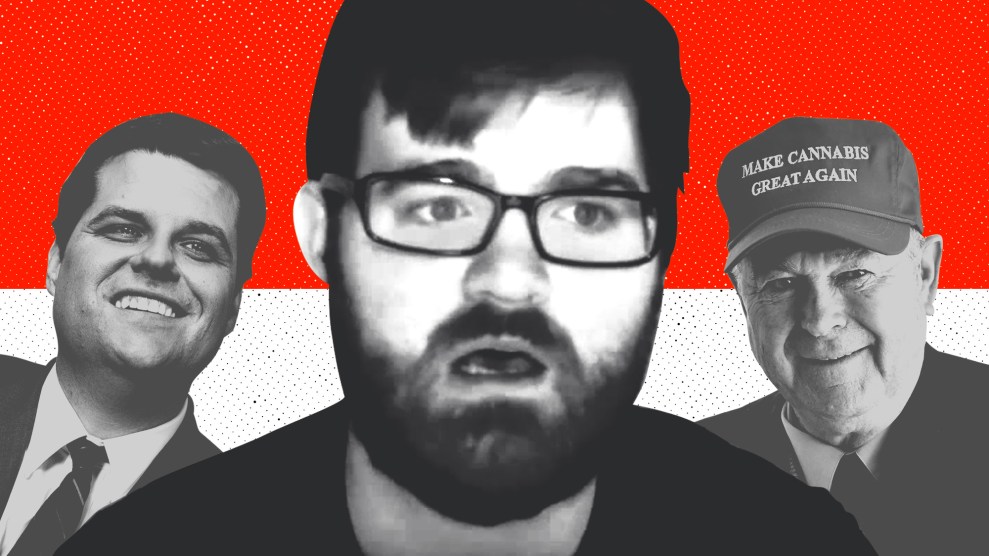 In January, Rep. Matt Gaetz, a conservative Republican firebrand from Florida, invited right-wing troll Charles C. Johnson to President Donald Trump’s State of the Union speech. Johnson, a notorious social media figure accused of being a white nationalist, had been permanently banned from Twitter for declaring that he wanted to “take out” a leader of Black Lives Matter. And in early 2017, Johnson had come under fire for denying the Holocaust. During an “Ask Me Anything” session on Reddit’s alt-right section, Johnson had been queried, “what are your thoughts on the Holocaust, WW2, and the JQ in general?” (“JQ” is neo-Nazi shorthand for the Jewish Question.) Johnson replied, “I do not and never have believed the six million figure. I think the Red Cross numbers of 250,000 dead in the camps from typhus are more realistic. I think the Allied bombing of Germany was a ware [sic] crime. I agree…about Auschwitz and the gas chambers not being real.”

Eight months later, these remarks caused a political stir. In October 2017, news reports revealed that Rep. Dana Rohrabacher (R-Calif.) had welcomed Johnson to a Capitol Hill meeting with Sen. Rand Paul. In response, the Anti-Defamation League urged Rohrabacher to “discontinue any association with Johnson and repudiate his views.” The ADL, citing Johnson’s “Ask Me Anything” statements, noted that it considered him a Holocaust denier. (In August 2017, Johnson had helped arrange a meeting between Rohrabacher and WikiLeaks founder Julian Assange in the Ecuadorian embassy in London, and weeks later he donated $5,400 in Bitcoin to Rohrabacher’s reelection campaign.)

Rohrabacher did not heed the ADL’s call to disassociate himself from Johnson. In a letter to the ADL, he said Johnson had been “allowed to sit in [on the Paul-Rohrabacher meeting], only in the sense that no one said no and told him to go.” Rohrabacher noted that he “strongly” disagreed with Johnson on some issues—including “those same beliefs you mention in your letter”—and that he hoped to have a “positive influence” on Johnson.

Gaetz’s decision to provide Johnson a ticket to the State of the Union rekindled the controversy over Johnson’s Holocaust remarks and earned Gaetz plenty of unflattering headlines. The ADL now excoriated the Florida congressman, noting, “It is an insult to the memories of those killed in the Holocaust, to their families, and to the Jewish community to bring to the State of the Union as your guest a Holocaust denier whose business has reportedly profited from donations for a notorious neo-Nazi.” (The group was referring to a crowd-funding website Johnson had founded that had been used to raise more than $150,000 for the legal defense fund of the editor of a neo-Nazi website.)

Gaetz insisted Johnson was not a Holocaust denier. But the Republican Jewish Coalition called on Gaetz to acknowledge that this label did fit Johnson. Gaetz, who claimed he had been unfamiliar with Johnson prior to meeting him the day of the State of the Union, did not yield on that, but he conceded, “I should’ve vetted him better before inviting him to the State of the Union. I regret that I didn’t.”

Meanwhile, Johnson declared, “I am not, nor have I ever been a Holocaust denier.” In an online statement, he insisted, “Even when I was poor, I supported charities dedicated to Israel, Jewish faith and Holocaust education.” Johnson, though, acknowledged his comments “could fairly be characterized as Holocaust denial.” But he maintained that he had made these “anti-Semitic” remarks only as part of an ongoing project to determine what speech would be limited or smothered by the tech companies that manage popular social media platforms. He was asserting that his Reddit comments were part of a secret trolling experiment he was running.

Eventually, the controversy over Johnson attending the State of the Union passed. But two months ago, Gaetz and Johnson were together again—this time on a yacht in Newport Beach, California. The occasion was a July 20 fundraiser for Gaetz’s reelection campaign. According to people familiar with the event, Johnson was among the group on the boat. And Rohrabacher was there, too. The event was being held in Rohrabacher’s district, and Rohrabacher spoke on behalf of Gaetz.

Referring to Johnson’s presence at the event, Jason Pitkin, Rohrabacher’s campaign finance director, who attended the fundraiser, tells Mother Jones, “I don’t remember who invited him there.” Asked whether Johnson had come at the invitation of Gaetz, Kip Talley, the chief of staff for Gaetz’s reelection campaign, replied in an email, “It was a private event and you’re welcome to check the FEC reports to see who donated. Thanks for reaching out.”

In a June 21 Facebook post, Johnson referred to Rohrabacher as “my friend and adopted congressman.” Six days later, he suggested on his Facebook page that his connections on Capitol Hill were significant: “I met with about fifteen members of Congress today and I will meet with a Cabinet member later to talk about tech censorship issues.” He did not identify the members or the Cabinet official. (This week, Johnson apparently deleted his Facebook account.)

The July 20 fundraiser for Gaetz, according to an invitation obtained by Mother Jones, was hosted by Alfred Balitzer and Rod Wilson, founders of Pacific Research & Strategies Inc., a California-based public relations and consulting firm. The yacht, named Burning Daylight, was owned by Balitzer, who had been on the faculty at Claremont McKenna College, Johnson’s alma mater, for 34 years and who has a long record of involvement in Republican politics. In his online defense of his Holocaust comments, Johnson had called Balitzer his “mentor” and noted that Balitzer had been “an advisor to the Simon Wiesenthal Center and served Ronald Reagan.”

Balitzer and Wilson did not respond to multiple requests for comment about the Gaetz fundraiser.

According to campaign finance records, Gaetz’s reelection account raised $2,750 from donors in the Newport Beach area about the time of the fundraiser. Nick Kovacevich, the CEO of Kush Bottles, which sells packaging, containers, and other products for the cannabis industry, was one of the attendees, and he gave $500 to Gaetz. He says he “wrote a check for Matt but Dana Rohrabacher was also there and that’s the reason I was invited.” (Rohrabacher is a supporter of cannabis legalization, and Gaetz has backed various marijuana reform initiatives.) One person familiar with the event said that Palmer Luckey, the founder of Oculus VR and an alt-right ally, was on the yacht. Luckey has been a donor for numerous Republican candidates, including Rohrabacher. (Luckey’s company did not respond to a request for comment.)

A spokesman for the ADL says, “Charles C. Johnson is a known Holocaust denier, who has suggested the number of Jewish victims was inflated and has posited that neither the Auschwitz concentration camp nor the gas chambers ever existed. ADL is extremely troubled by reports that Rep. Matt Gaetz allegedly hosted Johnson at a recent fundraiser. ADL previously called on Gaetz to discontinue his associations with Johnson and to publicly repudiate his views after it was revealed Johnson was Gaetz’ guest at President Trump’s 2018 State of the Union address. We renew those calls in light of this new report, as it is completely inappropriate for a sitting U.S. member of Congress to continue to knowingly associate with an anti-Semite and bigot like Charles Johnson.”

Gaetz was elected to the House in 2016 and has since been involved in multiple controversies; most notably he has defended Trump in the Russia investigation and claimed the president is a victim of a Deep State conspiracy. It was hardly unexpected that Rohrabacher, who has been dubbed “Putin’s favorite congressman” and who has pooh-poohed the Trump-Russia scandal, would help Gaetz shake the money tree in his own district. But Johnson’s attendance has surprised some Republicans who have been told about it. Gaetz and Rohrabacher just can’t seem to quit this guy.