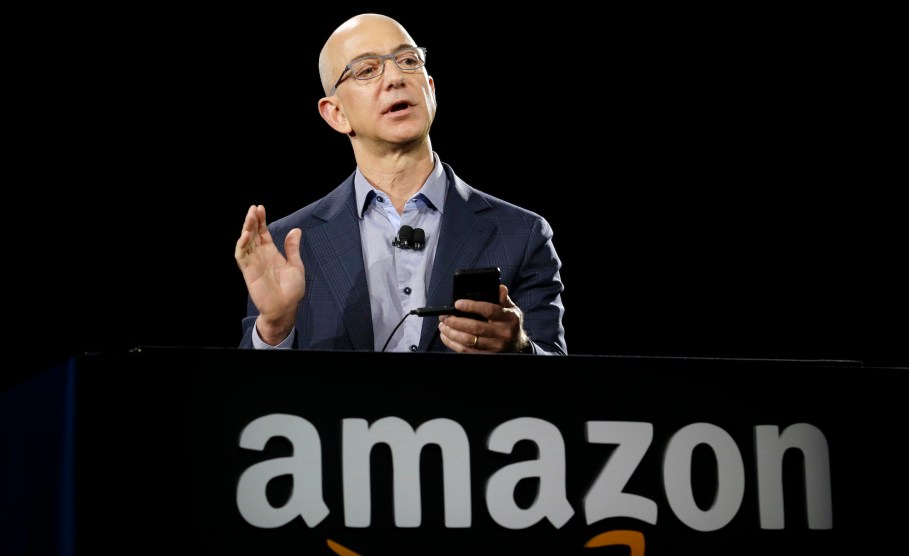 Sen. Bernie Sanders (I-Vt.) has spent much of 2018 feuding with Amazon and the company’s CEO, Jeff Bezos, with Sanders objecting to the low wages offered by the online conglomerate during a year when Bezos was officially declared the richest man in the world. Now, Sanders is introducing legislation aimed at increasing taxes on Amazon and other large employers, which explicitly calls out the Amazon chief by name: The Stop Bad Employers by Zeroing Out Subsidies (BEZOS) Act.

“The issue we are talking about today deals with the great economic crisis today and that is, despite low unemployment, we end up having tens of millions of Americans that are just so low, they can’t adequately take care of their families,” Sanders said on Wednesday while introducing the new bill.

The BEZOS Act, along with Corporate Responsibility and Taxpayer Protection Act, a companion bill introduced by Rep. Ro Khanna (D-Calif.) in the house, would establish a corporate tax on large employers (such as Amazon and Walmart) equal to 100 percent of the amount of federal benefits received by their low-wage workers. Companies with 500 or more employees—including part-time, independent, and franchise workers—would all be subject to the tax. Federal benefits taxable under the bill include Supplemental Nutrition Assistance Program (SNAP), Medicaid, the school lunch program, and Section 8 housing.

Sanders has hosted town halls in several cities around the country and in Washington, DC with workers from companies—including Walmart, McDonald’s, Amazon, and American Airlines—speaking out against working conditions. At the DC event in July, workers shared stories of being unable to afford food and rent, dangerous working conditions, and mistreatment at some of the nation’s wealthiest corporations. (Sanders invited the CEOs of each company for the DC event, but none showed up.)“Their model is basically [a] revolving door of bodies,” former Amazon worker Seth King said at the event in DC. The Chester fulfillment center where King worked has been the source of two worker deaths.

Sanders has singled out Amazon in particular for its low wages (between 9  and 19 percent lower than industry standard according to a 2016 study by the Institute for Local Self-Reliance). Sanders has also cited reporting that in states like Arizona, 1 out of 3 of Amazon’s workers rely on public assistance, including food stamps and public housing. At the same time, it’s estimated that Amazon, which briefly topped one trillion dollars in valuation earlier this year, collected nearly one billion in tax incentives last year. But Amazon isn’t alone in costing taxpayers while at the same time they take advantage of corporate tax cuts. A 2015 study from the University of California, Berkeley found that the federal government spent $152.8 billion per year on benefits to people who are working but earn low enough wages that they need government assistance of some sort.

“The American people are tired of subsidizing the wealthiest people in the world who are paying wages so low people are struggling to get by,” said Sanders on Wednesday.

Amazon shot back in a blog last week claiming that Sanders’ accusations were “inaccurate and misleading” and that the average hourly wage for a full-time warehouse associate was “well over $15/hour before overtime.” It also cited a comprehensive benefits package that includes health insurance and retirement. The company also claims that Sanders has declined to tour any Amazon fulfillment center where its warehouse workers operate. Josh Miller-Lewis, communications director for the Senator, tells Mother Jones that Amazon could not accommodate their first request to visit and that they are still working to schedule a visit to the warehouse in Chester, Virginia.

Amazon has been beleaguered with press reports over the past year about a pattern of malfeasance towards workers. For instance, in July, workers in Eagan, Minnesota protested over dangerous working conditions in their facility that lacked an adequate cooling system. There have also been reports of workers driven to homelessness after injuring themselves in unsafe working conditions at Amazon fulfillment centers.

During the Wednesday press conference, Sanders said he believed that the legislation could be shaped to avoid potential negative impacts on workers, such as a decrease in full-time jobs to duck the new taxes. “Bezos…could play a profound role, “said Sanders. “If he said today, nobody who is employed at Amazon will receive less than a living wage, this would not only improve lives for thousands of people at Amazon, it would send the message to every corporation at America that that’s where we should be going as a nation.”