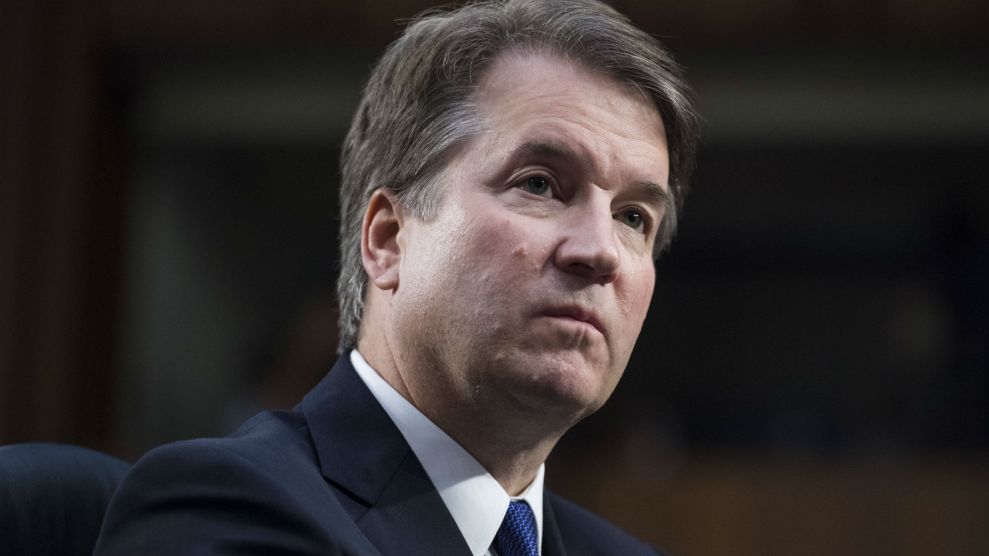 Almost exactly a year ago, the government blocked a 17-year-old girl in federal immigration custody from getting an abortion, kicking off one of the Trump era’s first high-profile legal battles over reproductive rights. While federal judges eventually stepped in on behalf of the pregnant detainee, the matter was back in court Wednesday as a three-judge panel at the federal appeals court in Washington, DC, heard arguments over whether the earlier ruling allowing Jane Doe’s abortion was correct.

Kavanaugh’s writings in the case are the only explicit rulings on abortion he’s made during his judicial career.

Doe was prevented from going to a September 2017 abortion appointment under a policy put in place after President Donald Trump’s election that required the director of the Department of Health and Human Services’ Office of Refugee Resettlement, which is responsible for caring for detained child migrants, to approve individual abortion requests. Beginning in March 2017, those reviews were conducted by newly-appointed ORR director Scott Lloyd, a longtime anti-abortion lawyer. (Mother Jones reported last month that as a younger man Lloyd had once helped pay for a partner’s abortion.) Lloyd rejected every abortion request that crossed his desk; he denied abortions for at least seven girls, including at least one rape victim, before either federal courts intervened allowing them to terminate their pregnancies or they left ORR custody to seek abortion care on their own.

Wednesday’s hearing largely focused on a technical debate on whether detainee girls can sue over the abortion policy as a group so any changes or reversals to the policy would automatically apply to all current and future pregnant detainees. That would free other girls like Doe from having to mount independent lawsuits to access abortion—a logistically and financially unlikely scenario. But it also put a renewed spotlight on an earlier DC Circuit Court of Appeals ruling in the case, in which Trump Supreme Court nominee Brett Kavanaugh penned two opinions disagreeing with his colleagues’ decisions that allowed the girl access to an abortion.

Emails and memos obtained from ORR during this case show officials requiring pregnant girls to notify their parents about pregnancy and abortion against their will, to receive anti-abortion counseling, and to only seek information at religiously-affiliated crisis pregnancy centers on a pre-approved list created by two religiously-affiliated organizations opposed to abortion.

This reality, American Civil Liberties Union attorney Brigitte Amiri argued Wednesday, shows that all pregnant girls in ORR custody could be harmed by the agency’s abortion policies. She argued that including all women in the class would ensure equal access to neutral and comprehensive information for all pregnant minors. On Wednesday, two members of the three-judge panel signaled particular concern about the lower court’s decision to allow detained pregnant migrants who’ve never expressed interest in an abortion to join the suit. While the case largely gained prominence because of incidents in which girls were denied abortion access, the suit also concerns policies governing information on abortion care provided to women in ORR custody.

The Department of Justice argued that an “across the board veto” policy for abortion requests would be legal.

Judge Sri Srinivasan seemed to agree, noting that the choice to continue or terminate a pregnancy can be a fluid one, underlining a need for agency policies that apply to all pregnant minors equally. Judges Robert Wilkins and Laurence Silberman suggested pregnant girls who’ve never expressed interest in an abortion shouldn’t be allowed to join the suit, finding little evidence such girls are being harmed by ORR’s policies on abortion.

Both Wilkins and Silberman noted ORR only provided information on abortion following a pregnant girl’s request about, or for access to, abortion, and wondered whether the class should be limited to that narrower group of women. The ACLU’s Amiri argued this would amount to requiring girls to say a “magic word” to have their right to abortion protected. “She may never say it,” Amiri noted, arguing that adopting that standard would prevent vulnerable girls—minors without documents, often pursuing asylum claims and sometimes without a strong command of English—from receiving neutral information about pregnancy options, including abortion.

The Department of Justice’s August Flentje argued that an “across the board veto” policy for abortion requests by girls in ORR custody would be legal. He clarified that no such formal policy exists at ORR, but acknowledged that Lloyd has never approved a request. The government, he argued, is under no obligation “to commit any resources to terminate a pregnancy.”

Lloyd rejected every abortion request that crossed his desk.

Last fall, the litigation around this abortion policy ended up in front of Judge Kavanaugh and his colleagues on the DC Circuit Court of Appeals. Kavanaugh’s writings in the case are the only explicit rulings on abortion he’s made during his judicial career, and have featured in his confirmation debate. Kavanaugh first penned an order that would have further delayed Doe’s access to abortion. Other judges reversed that order on appeal. Kavanaugh responded with a solitary dissent, in which he wrote his colleagues had “badly erred” in allowing Doe to go ahead with her abortion. He called their decision “a radical extension of the Supreme Court’s abortion jurisprudence.” The DOJ’s Flentje echoed this phrasing almost word for word in his opening remarks to the court Wednesday.

If Kavanaugh is confirmed to the Supreme Court, he may well be faced with the case again. During the hearing Wednesday, Silberman hinted at the possibility without naming Kavanaugh, noting that the ACLU’s arguments may be banking on an eventual scenario in which a potential Supreme Court justice would need to recuse themselves.