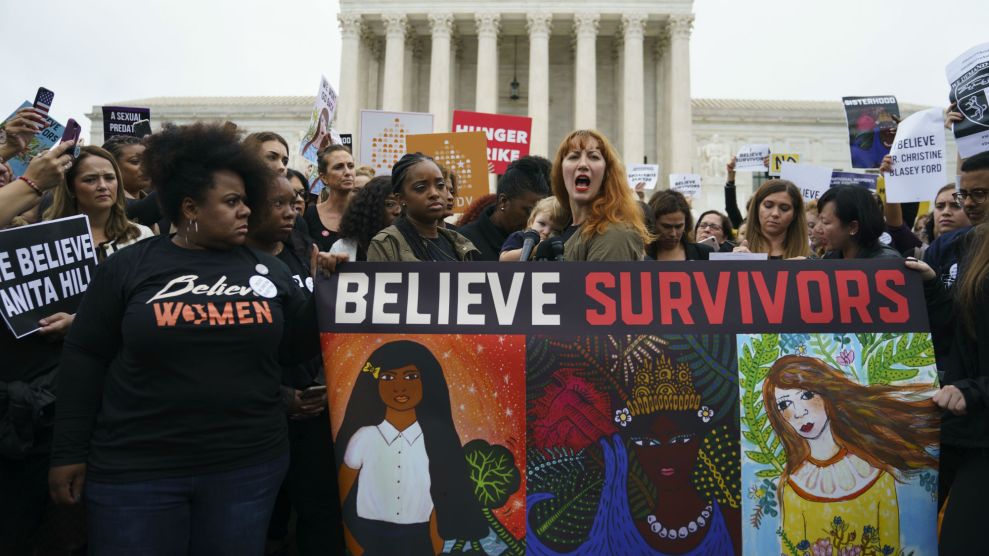 A higher volume of calls have been rolling in ever since Christine Blasey Ford accused Supreme Court nominee Brett Kavanaugh of sexual assault—an allegation that also prompted the #WhyIDidn’tReport hashtag to go viral on Twitter last week. Then on Sunday, the New Yorker revealed a second woman, Deborah Ramirez, is accusing Kavanaugh of exposing himself to her while in college.

According to the Rape, Abuse & Incest National Network, the organization which runs the National Sexual Assault Hotline, these surges are common when sexual assault is in the news. This time, the increase in calls was even higher than when #MeToo first hit. After the Harvey Weinstein scandal broke, the center saw a 46 percent increase in calls, RAINN press secretary Sara Mcgovern told Mother Jones in an email.

The Weinstein news was just the beginning of the conversation, experts say. “People were talking about [sexual assault] for the first time,” Amy Oestreicher, a PTSD specialist and member of the RAINN Speakers Bureau, tells Mother Jones. “Now, this is starting to really be present in the media. And for survivors, we’re starting to see there is support—and how frighteningly often this happens.”

Part of the reason RAINN might see a surge in survivor calls, she says, is because it pulls victims out of a “freeze response” to sexual assault. “With PTSD and freeze response, you often feel very disassociated with your body. It just becomes overwhelming to speak about anything. You feel like you are in a world that no one knows about or can relate to,” Oestreicher says. Seeing other stories on the news and on social media can help. “People are really seeing that they’re not alone,” she says.

Since #MeToo, “the demand for RAINN’s services has been off the charts,” McGovern told CNN. “Our victim service programs went from helping about 15,000 victims per month to helping about 22,000 per month.” Because the hotline is confidential and anonymous, Mcgovern told CNN she couldn’t share any further details about the calls.
Ford is scheduled to testify before the Senate Judiciary Committee on Thursday.
You can reach the RAINN sexual assault hotline at (800) 656-HOPE.